Gesneriaceae in China and Vietnam: Perfection of taxonomy based on comprehensive morphological and molecular evidence. Spatial distributions of seaweed, Sargassum muticum, before and after cleaning historic Herbarium data. Digitized database of plants needed: Expert. Nagpur: Despite being a concrete jungle, Mumbai has the richest biodiversity in the state, stated T Srinivasu, professor and head of botany department at Nagpur University. 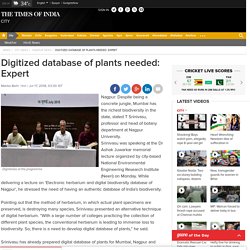 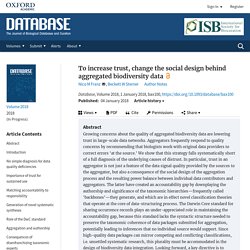 Close. A specialist’s audit of aggregated occurrence records. Bringing NLU to BRIT. In March 2017, the scientific community was ablaze with the news that the University of Louisiana at Monroe would no longer be able to care for its natural history collection, including a significant fish collection and 470,000 herbarium specimens. 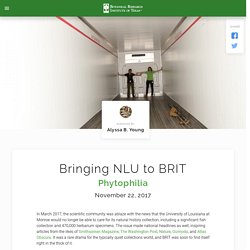 The issue made national headlines as well, inspiring articles from the likes of Smithsonian Magazine, The Washington Post, Nature, Gizmodo, and Atlas Obscura. It was a rare drama for the typically quiet collections world, and BRIT was soon to find itself right in the thick of it. But let's back up a bit. Several years ago, the natural history collections at University of Louisiana at Monroe were moved from a campus building to an old print shop underneath Brown Stadium. Conditions were far from ideal for housing precious scientific specimens, but it was better than nothing and was only temporary; the specimens were eventually supposed to find a new spot in an academic building.

Some History Back to the Story... How well documented is Australia's flora? Understanding spatial bias in vouchered plant specimens. The Importance of Herbaria - The Plant Press. From Plant Press, Vol. 5, No. 3 from July 2002. 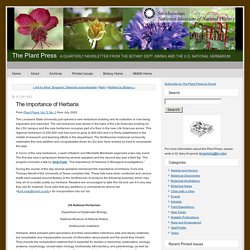 The Ghost Orchid: one of Britain's rarest plants. The Welsh National Herbarium at Amguedfa Cymru has a small - but very precious - collection of Ghost Orchids (Epipogium aphyllum Sw.); is this something to be proud of, or should they have been left in the wild? 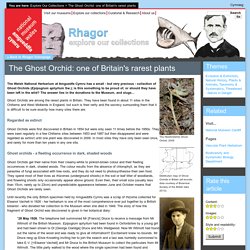 The answer lies in the donations to the Museum, and slugs... Ghost Orchids are among the rarest plants in Britain. They have been found in about 11 sites in the Chilterns and West Midlands in England, but such is their rarity and the secrecy surrounding them that it is difficult to be sure exactly how many sites there are. Regarded as extinct. The Erosion of Collections-Based Science: Alarming Trend or Coincidence? From Plant Press, Vol. 17, No. 4, October 2014. 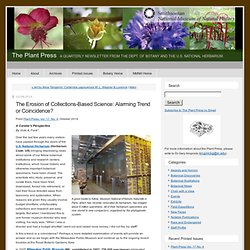 A Curator’s PerspectiveBy Vicki A. Funk* A good model to follow: Muséum National d'Histoire Naturelle in Paris, which has recently renovated its herbarium, has imaged about 8 million specimens. It's Hard to Be a Natural History Museum in the 21st Century - Atlas Obscura. The space where the University of Louisiana at Monroe housed its natural history collection was embarrassing. 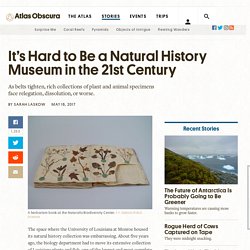 About five years ago, the biology department had to move its extensive collection of Louisiana plants and fish, one of the largest and most complete in the state, from a dedicated space in a campus building to an old print shop under an old stadium. Plant collections left in the cold by cuts. Chris Maddaloni/Nature Curator Vicki Funk of the US National Herbarium displays one of the collection’s 5 million specimens. 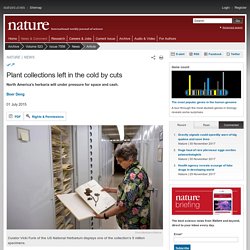 Herbaria in North America are withering away. Collections of preserved plant specimens that have been accumulating for a century or more are being closed and consolidated as tight budgets and competition for space put pressure on universities to direct resources to facilities such as labs. More than 100 North American herbaria have closed since 1997, leaving just over 600 remaining. Nation's botanical treasure troves 'under huge threat' Image copyright Oxford University A million plants from every corner of the globe are tucked away inside the cabinets that line the walls. 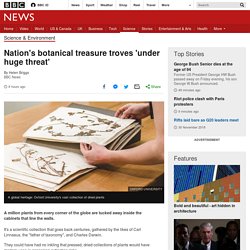 Biological Collections Are Vital to Preserving Species in the Face of Climate Change  Among the many different resources that scientists will use to try to forestall some of the effects of climate change, the nation's treasure trove of preserved plants, animals, and microscopic organisms is undoubtedly one of the least known to most people. 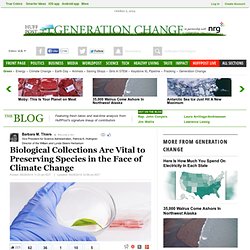 But these biological collections represent a very powerful tool for understanding how climate change is likely to affect life on Earth. Our nation has a rich heritage in such collections, which are held at about 1,000 scientific research institutions such as universities, natural history museums, and botanical gardens. What are in these collections? They consist of such things as the skeletons and skins of mammals, birds and reptiles; fossils, tissue samples, and fish and spiders preserved in fluid; dried plants and fungi glued to stiff paper or stored in boxes; and tiny organisms on microscope slides. Climate change is likely to affect all life on Earth. BioGeoBias. Summary This project looks at geographic (spatial) sampling bias, which is particularly relevant in the context of species distribution modelling (SDM).

Spatial sampling bias can distort the predictions derived from SDMs and therefore lead to erroneous conclusions. Methods to correct for sampling bias in presence-only species occurrence data, such as the target-group-background approach, were introduced years ago, but their application in the community is not yet very widespread.

The British took these wild plants to London. Now they are coming back! Love reading positive news? Help The Better India grow Support our endeavor to become every Indian's source of daily inspiring positive news. Learn more. Handwriting on labels. The location and status of older type material are not always clear, and indeed the types of many taxa remain to be tracked down. Such material may have passed through several owners before coming to rest in a particular collection, in movements that are not always documented. An author’s original labels (where these survive) and other handwritten sources can be useful in verifying the status of a particular lot.

In museum collections, original labels have usually been supplemented with those written by successive curators and researchers. Letter re GLOVAP from ASPT Leadership to Society — American Society of Plant Taxonomists. Dear ASPT members, colleagues and friends: In February of this year, a controversial, self-published and apparently non-peer reviewed manuscript appeared online, proposing an unprecedented number of taxonomic changes for vascular plants (3286 new combinations, 415 new species names, and 4 species and 2 genera new to science).

This publication, The Global Flora Special Edition, GLOVAP Nomenclature Part 1: Vol. 4 (hereafter abbreviated GLOVAP), published by Plant Gateway Ltd., has resulted in a lot of conversation – via email, Facebook, twitter, and even old-fashioned phone calls and face-to-face encounters – from members of the global community of plant systematists and taxonomists, many of you included. The overarching concern is that GLOVAP is a fundamental deviation from the way that we as a scientific community conduct our research, collaborate and respect each other as colleagues, and publish our results through a peer-review process. Plant Gateway. Botanists fear research slowdown after priceless specimens destroyed at Australian border. This week’s news that Australian customs officers incinerated irreplaceable plant specimens has shocked botanists around the world, and left many concerned about possible impacts on international research exchanges.

Some have put a freeze on sending samples to Australia until they are assured that their packages won’t meet a similar fate, and others are discussing broader ways of assuring safe passage of priceless specimens. "This story is likely to have a major chilling effect on the loan system between herbaria across national boundaries," says Austin Mast, president of the Society of Herbarium Curators and director of the herbarium at Florida State University in Tallahassee. "Without the free sharing of specimens, the pace of plant diversity research slows.

Australian customs destroys unique lichen specimens in quarantine mix-up. Australian customs officials destroyed two irreplaceable plant specimens that were being loaned to scientists by international institutions, prompting one of the institutions to suspend all transfers to Australian scientists. Would-you-burn-the-mona-lisa-if-it-was-sent. Rescue of a Large Orphaned Herbarium Collection: Addressing the Security, Accessibility, and Repatriation of the NLU Herbarium.

A university is eliminating its science collection — to expand a running track. The curators of the Museum of Natural History at the University of Louisiana-Monroe got grim news last week from the school's director: The museum's research collection had to be moved out of its current home. Herbarium - Univ. of Hohenheim sur Twitter : "Things that fortunately doesn't happen anymore: several historical #herbarium samples collected from two different collectors but all on the same sheet. Beautiful but who is who? #curationcrimes #Iamacurator #