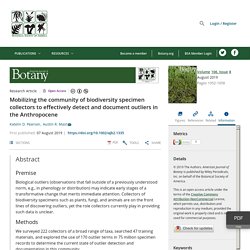 These adverse processes may be initially marked by outliers (otherwise described as anomalies, oddities, peculiarities, abnormalities, and with other various terms): observations that fall outside of a previously understood norm. Collectors are a diverse group of researchers who collect organisms or parts of organisms for identification, study, documentation, and preservation in natural history collections, including herbaria. We began with the observation that collectors often have extensive personal experience, a network of scholarly resources, detective skills honed to recognize differences among organisms, and the motivation to resolve incongruities with existing resources when identifying their collections, especially since unique specimens may indicate new species. American Journal of Botany. 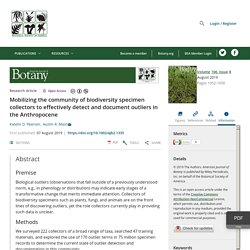 These adverse processes may be initially marked by outliers (otherwise described as anomalies, oddities, peculiarities, abnormalities, and with other various terms): observations that fall outside of a previously understood norm. Collectors are a diverse group of researchers who collect organisms or parts of organisms for identification, study, documentation, and preservation in natural history collections, including herbaria. We began with the observation that collectors often have extensive personal experience, a network of scholarly resources, detective skills honed to recognize differences among organisms, and the motivation to resolve incongruities with existing resources when identifying their collections, especially since unique specimens may indicate new species.

Smithsonian Plant Collections, Guiana Shield: 1985–2014, Biological Diversity of the Guiana Shield Collections. "Algae and Corallines of the Bay &amp; Harbor of New York" (1850) contains about 300 mounted algae specimens. Author C.F. Durant estimated that he spent ~2,000 hours collecting, preparing &amp; drying the specimens for this work. View it in #BHLib. This is the first time I've seen someone thank the mules for their fieldwork assistance. I'm all for this. #botanistsandmules.

Guide to Collecting Herbarium Specimens in the Field. Check out this telescopic carbon fiber pruning pole, as demonstrated by Ryota Aoyagi at @stri_panama. It’s the size of a poster tube but extends to 20 m. Great for leaf sampling, anyone using for herbarium collections? #cuttingedge #botany… The next generation of natural history collections. Abstract The last 50 years have witnessed rapid changes in the ways that natural history specimens are collected, preserved, analyzed, and documented. 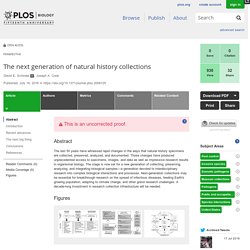 Those changes have produced unprecedented access to specimens, images, and data as well as impressive research results in organismal biology. The stage is now set for a new generation of collecting, preserving, analyzing, and integrating biological samples—a generation devoted to interdisciplinary research into complex biological interactions and processes. Next-generation collections may be essential for breakthrough research on the spread of infectious diseases, feeding Earth's growing population, adapting to climate change, and other grand research challenges. Guest Post: iPads and digital data collection in the field. From Meghan: This is a guest blog post by ecologists Isla Myers-Smith and Gergana Daskalova from the University of Edinburgh. 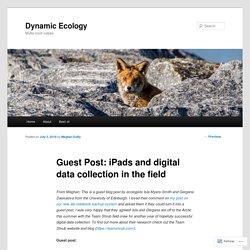 I loved their comment on my post on our new lab notebook backup system and asked them if they could turn it into a guest post. I was very happy that they agreed! Isla and Gergana are off to the Arctic this summer with the Team Shrub field crew for another year of hopefully successful digital data collection. BBC Radio 4 - Gardeners' Question Time, Bodnant Gardens. The Elusive Lady’s–Slipper Orchid.

This week’s new blog has been written by our Natural Sciences Curator, Dr Gerard McGowan He writes: A recent enquiry about our collections brought to mind a rare and ‘infamous’ specimen in our Botany Collection, specifically from the Herbarium Collection of Dr William Arthur Sledge (NS.30.82). 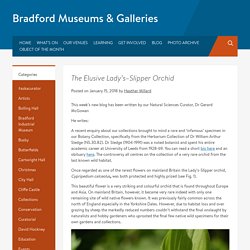 Dr Sledge (1904-1991) was a noted botanist and spent his entire academic career at University of Leeds from 1928-69. You can read a short bio here and an obituary here. The controversy all centres on the collection of a very rare orchid from the last known wild habitat. Once regarded as one of the rarest flowers on mainland Britain the Lady’s-Slipper orchid, Cypripedium calceolus, was both protected and highly prized (see Fig. 1). This beautiful flower is a very striking and colourful orchid that is found throughout Europe and Asia. Modern Conservation The Lady’s Slipper orchid favours a habitat of open woodland on well-drained calcareous soil. Mapping the history of botanical collectors: spatial patterns, diversity, and uniqueness through time: Systematics and Biodiversity: Vol 16, No 1. 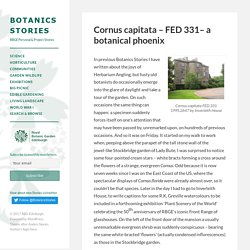 Dan Hinkley: Plant Collector. The architecture of Dan Hinkley's garden on the Kitsap Peninsula in Washington State is native, shaped by old Douglas firs and a seeping bog. 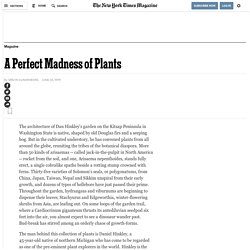 But in the cultivated understory, he has convened plants from all around the globe, reuniting the tribes of the botanical diaspora. The Amazonian Travels of Richard Evans Schultes. Livingstone's Zambezi Expedition. Livingstone’s Zambezi Expedition is a beta site built by JSTOR Labs in collaboration with JSTOR’s Content Development team based on David Livingstone’s African expedition along the Zambezi and Shire Rivers from 1858-1864. 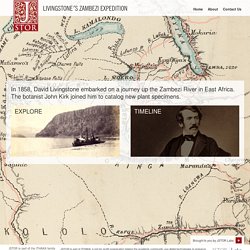 The site provides students, teachers, and scholars with a greater understanding of the scientific, historical, and cultural contexts of the expedition, offering users both a high-level overview of the expedition and the ability to perform a detailed analysis of the materials. The resource brings together content from JSTOR Global Plants with journals and pamphlets from other relevant JSTOR collections.

This includes more than 550 plant specimens collected on the expedition; and more than 150 personal letters, reports, maps and related materials. Learn more about Livingstone’s Zambezi Expedition in the FAQs, below, or explore it yourself. Retracing famous botanist steps leads to rare plant rediscovery. Rare plants that have not been seen in more than a decade have been rediscovered by four botanists in South East Forests National Park near Bombala. 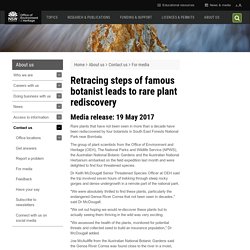 The group of plant scientists from the Office of Environment and Heritage (OEH), The National Parks and Wildlife Service (NPWS), the Australian National Botanic Gardens and the Australian National Herbarium embarked on the field expedition last month and were delighted to find four threatened species. Dr Keith McDougall Senior Threatened Species Officer at OEH said the trip involved seven hours of trekking through steep rocky gorges and dense undergrowth in a remote part of the national park. "We were absolutely thrilled to find these plants, particularly the endangered Genoa River Correa that not been seen in decades," said Dr McDougall.

"We set out hoping we would re-discover these plants but to actually seeing them thriving in the wild was very exciting. Specimen Hunting. Botanical exploits: How British plant hunters served science. Image copyright Royal Botanic Gardens, Edinburgh and RHS In a corner of the Yorkshire Dales, far from the beaten track, you might stumble on the peaceful village of Clapham. 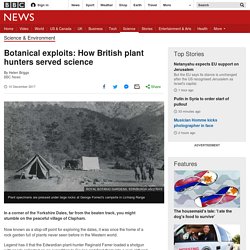 Now known as a stop-off point for exploring the dales, it was once the home of a rock garden full of plants never seen before in the Western world. Australian Plant Collectors and Illustrators. This web site is based on the list published by J.H. Willis, D. Pearson, M.T. Davis, and J.W. Green, Western Australian Herbarium Research Notes Number 12, August 1986. The daring work of saving the last samples of dying species. Steve Perlman doesn’t take Prozac, like some of the other rare-plant botanists he knows. Instead, he writes poetry. Either way, you have to do something when a plant you’ve long known goes extinct. Seeking nightshades in South America: Making order out of chaos.

29th March – Good bye to Freddy our car Today we had to say goodbye to Freddy, our lovely and most faithful car. We are finally back in Lima! The day passed sorting things out, and clearing and cleaning Freddy. Presses went back to the Museum’s store room, specimens into our preparation area, and so on. Most importantly, Paul re-united with his family – his 2 year old daughter Fabiana was full of smiles! BES Peruvian Amazon Expedition 2015 (Flora and Fauna) The Riddle of the Tsangpo Gorge – part one – Explorers of the RSGS. In their tightly disciplined and carefully ordered society, the Victorians loved nothing more than a Gothic mystery.

Perhaps it was their only escape from the stuffy drawing rooms, the starched collars and the excruciating corsets that all but smothered any natural human impulses at birth. After all, this was the era of the Bronte sisters and Mary Shelley, of Dickens and Tennyson and Hardy, bold writers who fused passion with tragedy and were adept at wringing the last hopeless tears out of a reader’s heart. So, when the riddle of the Lost Falls was first dropped into polite conversation sometime in the late 1800s, it caught like wild fire. Everything the Victorians craved was right here: romance, danger, suspense… and the glory of Empire. The Riddle of the Tsangpo Gorge – part two « Explorers of the RSGS. Concluding my story about one of the world’s deepest canyons, and the men who risked their lives to explore it… Rhododendron, with Everest in background How on earth Frank Kingdon Ward survived just one of his many expeditions into the Himalayas I shall never know. If he wasn’t being pursued by a yak, he was clinging by his fingernails to a yawning precipice or wobbling precariously on flimsy rope-bridges suspended high above raging rivers.

If you thought that plant collecting in the Edwardian era was a peaceful and sedentary pastime, think again. And then there’s Eric ‘Hatter’ Bailey, the dashing young officer in the Bengal Lancers, so called by his friends who knew that his mad streak would land him in hot water… but even they couldn’t foresee his knife-edge existence as a double agent in Bolshevik-controlled Turkestan, posing as an Austrian soldier while trying to stay one leap ahead of death. Preparations for fieldwork in Indonesia: RBGE. Spanish Vasculum. Henslow's vasculum. A vasculum is a container once commonly used by botanists for temporary storage of plant material collected during fieldwork.

Collectors: Backstage at the museum. Lance Grande University of Chicago Press: 2017. ISBN: 9780226192758 Buy this book: US UK Japan. Directions for bringing over seeds and plants, from the East-Indies in a state of vegetation. If you are generating a PDF of a journal article or book chapter, please feel free to enter the title and author information. The information you enter here will be stored in the downloaded file to assist you in managing your downloaded PDFs locally. Thank you for your request. Herbarium specimens tell us about people as well as plants! The Contributions of South Asian Jesuits to Environmental Work  »  Brill Online.

Plant Collecting and the Lived Experience of Botany: Bill Burtt’s Malaysian Collecting – Botanics Stories. Confessions of a Herbarium-Savvy Field Biologist. The journey of the Red Oat Grass (with images, tweets) · toral31KE. How Professionals Wrestle With One of the World's Scariest Plants. New types of coffee, parsnips and roses among 1,700 plants discovered last year.