Lithographs from M. E. Descourtilz’s *Atlas des Champignons* (1827) On the topic of danger, Descourtilz himself led a curious life, working as a physician, botanist, and inadvertent historiographer of the Haitian Revolution. 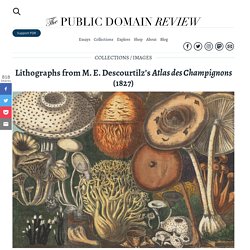 His 1809 Voyages d’un naturaliste chronicles, among other adventures, a trip from France to Haiti in 1799 in order to secure his family’s plantations. Despite having been issued a passport, he was arrested soon after his arrival by Jean-Jacques Dessalines, under Toussaint Louverture’s command, and only escaped death due to his medical training and the intervention of Mme Dessalines, the later Empress of Haiti: Marie-Claire Heureuse Félicité Bonheur. He spent four years in Haiti, serving against his will as a physician to the revolutionary forces. While he “was mindful to behave in a manner appropriate to the new economic and racial order”, writes Philippe R.

Girard, Descoutilz remained highly critical of independence and in support of reconquest. Search: Magnolia. Botanical Illustrations. Soon is spring. Artwork by @mrs_heberling and featured in @NewPhyt, @Ecology_Letters, @Botanical_ APPS, and most recently, my office bulletin board that I rarely see anymore. Illustrations of plant-root systems from 1919. In 1919, the American biologist John Ernest Weaver published The Ecological Relations of Roots, a study of the root-systems of desert plants. 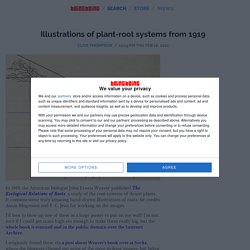 It contains some truly amazing hand-drawn illustrations of roots; he credits Annie Mogensen and F. C. Jean for working on the images. I'd love to blow up one of these as a huge poster to put on my wall! What is botanical art? How do you create botanical art? 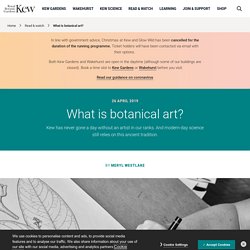 The process of creating a plate is collaborative and scientific. Together, the scientist and the artist go through a long discussion about the specimen, and which details are essential to bring out that will form part of the record, and a reference for other scientists. The artist will decide whether to use pen and ink, or watercolour and their initial sketches. Lucy says, ‘A specimen could come to us bent, folded or misshapen. This is an excerpt of the video (it has sound). The whole video here Filmed at the Linnean Society. Thnx to Elaine Charwat &amp; @isacharmant. Narration based on interviews with Claire Banks &amp; Mark Watson. Narrated by Benjamin Cook. Filmed by Christof.

Frances Sargent Osgood and the Language of Flowers: A 19th Century Literary Genre of Floriography and Floral Poetry. Cover. 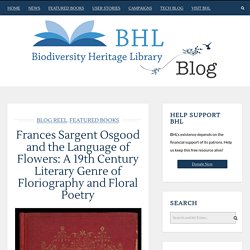 Osgood, Frances Sargent (editor). The Floral Offering, A Token of Friendship (1847). Contributed in BHL from Chicago Botanic Garden, Lenhardt Library. Digitization sponsored by the National Endowment for the Humanities (NEH). The Language of Flowers genre is at the intersection of botany, horticulture, natural history, art, poetry, and women’s studies. Some stunning plates from John Martyn's Historia Plantarum Rariorum (1728-1738) @theULSpecColl CCF.47.34. The plates were funded by botanists including Hans Sloane, George Clifford, John Wilmer, and Stephen Hales. Many relate to specimens in @CUHerb. Artists in Edwards’s Botanical Register. Edwards’s Botanical Register was a serial publication consisting of 19 volumes, plus an appendix that ran from 1829-1847 and was edited by John Lindley (1799–1865). 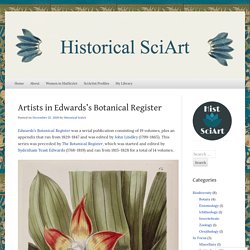 This series was preceded by The Botanical Register, which was started and edited by Sydenham Teast Edwards (1768-1819) and ran from 1815-1828 for a total of 14 volumes. Volumes 15 through 32 of Edwards’s Botanical Register have hundreds of beautiful illustrations that were printed from copper engravings; volume 33’s illustrations were produced from lithographs and hand-colored. Along with several others, both Lindley and Edwards produced illustrations for this series. Like many natural history works, the artists are often uncredited in the actual text of Edwards’s Botanical Register, so determining the creator of the illustration requires careful examination of signatures on the individual plates, as well as research in reliable secondary sources.

Botanical illustration is becoming endangered, but the job is essential. Illustrations from the golden age of botanical art. All of which explains why the discovery of an album of 69 botanical illustrations by Lady Maria Compton, Marchioness of Northampton (1766-1843), her teacher Margaret Meen (circa 1755-1824) and her niece Emma Smith (1801-1876) — who later married Jane Austen’s nephew — is such a rare find. 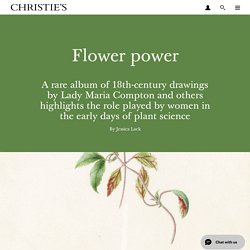 ‘We know very little about these women, so this is a valuable record of three remarkably talented painters,’ says Kishor. The album, which is offered online in the 300 Years of British Drawings sale until 8 December, has been in the Compton family for more than 200 years. Illustration and Representation — Dumbarton Oaks. In the unsigned preface to Franz Bauer’s Delineations of Exotick Plants Cultivated in the Royal Garden at Kew (1796), Joseph Banks (1743–1820) wrote of the plates, which are accompanied by no text except their Linnaean names: It will appear singular at first sight, that engravings of plants should be published without the addition of botanical descriptions of their generic and specific characters; but it is hoped that every botanist will agree, when he has examined the plates with attention, that it would have been a useless task to have compiled, and superfluous expense to have printed, any kind of explanation concerning them; each figure is intended to answer itself every question a botanist can wish to ask, respecting the structure of the plant it represents; the situation of leaves and flowers are carefully imitated, and the shape of each is given in a magnified, as well as in a natural size. 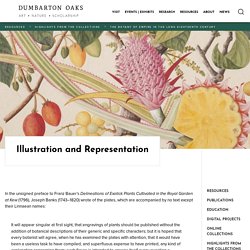 How did people see plants? If I am not deceived by my own passion . . . Bleichmar, Daniela. RHS Lindley Library – Digital collections. 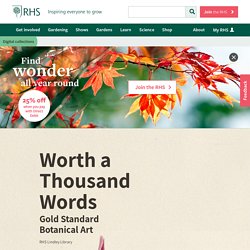 Hideo Horikoshi studied these classical Japanese flowers at the National Museum of Japanese History and the Shinjuku Gyoen National Garden. He completed his painting over two growing seasons, a year apart. He beautifully captures how the flowers’ petals twist as they mature. Let's Talk About Botanical?

National Gallery of Ireland. Watch this illustrated talk by Alexandra Caccamo, Librarian at the National Botanic Gardens, who discusses the work of Lydia Shackleton and Alice Jacob, specifically their paintings of orchids. 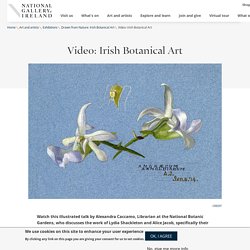 Both artists feature in our exhibition Drawn from Nature: Irish Botanical Art. Drawn from Nature celebrates three centuries of Irish botanical art. The exhibition includes drawings, watercolours, prints, and illustrated publications dating from the 1700s to the modern day. The backgrounds, motivations, and methods of the artists exhibited are diverse. Yet all are connected by a shared desire to observe, record, and advance our knowledge of the natural world. Oak Spring Garden Foundation - Introducing Fantastic Flora. Plants are much more than décor for your desk, or greenery for your lawn. 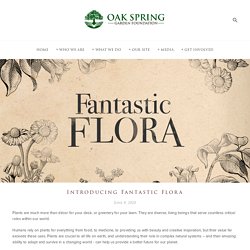 They are diverse, living beings that serve countless critical roles within our world. Humans rely on plants for everything from food, to medicine, to providing us with beauty and creative inspiration, but their value far exceeds these uses. Plants are crucial to all life on earth, and understanding their role in complex natural systems – and their amazing ability to adapt and survive in a changing world - can help us provide a better future for our planet. Sparking public dialogue about plants and the environment is a major part of the Oak Spring Garden Foundation’s mission, and we are excited to announce the launch of a free, digital educational exhibit that features the fascinating world of plants. Fantastic Flora blends art, culture, history, and science to explore the role of plants in both human history and the natural world. Potato watercolors. Close Watercolors of potato plants, approximately 1820. ecb00003. Botany Libraries, Economic Botany Library of Oakes Ames, Harvard University.

A Calcutta botanical drawing of Hamiltonia suaveolens with an interesting provenance. Henry Noltie Some years ago, as part of the barter economy, I acquired a handsome, but all but empty, early nineteenth-century album, its calf spine lettered in gilt ‘CHINESE PAINTINGS’. The binding is a luxurious one, of small-folio size, with marbled boards and olive-green, watered-silk endpapers. Tipped onto its flyleaf is a later, supplementary sheet signed with the names Katherine Amelia and Elizabeth Margaret Hibbert and the date 21 August 1845.

The exhibition, which roughly spans the years between 1770 and 1840, is billed as the first in Britain dedicated to the Indian artists who were commissioned by British patrons associated with the East India Company, artists whose work (much of which was destined for export to Europe) has been generally grouped, by art historians and curators, under the umbrella term ‘Company Painting’ rather than credited to individuals. Moreover, the exhibition attempts to argue that these individuals deserve a place in the history of Indian art more than they merit a place in the history of colonialism.

William Dalrymple: Correct. The East India Company was very different in so many ways from the Raj. Forgotten Masters: Indian Painting for the East India Company - The Wallace Collection. Harvard Botanical Illustrations - CURIOSity Digital Collections. Colored and uncolored images in 16th–17th-century plant books. What is botanical art? Incredible 19th-Century Botanical Catalog Put Online and Made Interactive. Making of the Illustrations of the Natural Orders of Plants - C82: Works of Nicholas Rougeux. Illustrations of the Natural Orders of Plants.