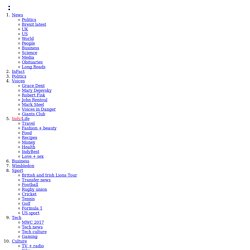 The I.F.O. is fuelled by eight electric engines, which is able to push the flying object to an estimated top speed of about 120mph. Download Audio. RSS Feed RSS Feed (free software only) 1,537 applications totalLast updated: Jun 15th 2017, 02:37 GMT Fluctus 3.8.1 Build 383 An intuitive and user-friendly audio file editor that enables you to cut, erase, normalize or adju... 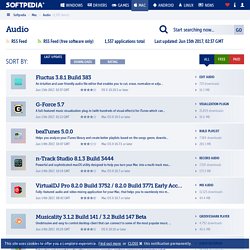 Mac OS X and iOS software development. Download Kaspersky Internet Security 2015—Multi-Device. Audio Interfaces for your MacBook, iMac, and Mac pro. Get the right Audio Interface for your Macbook, MacBook Pro, Mac Mini, iMac and Mac Pro There are a few things to watch out for if you have a late model Mac. 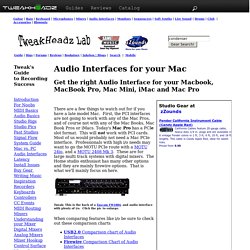 First, the PCI interfaces are not going to work with any of the Mac Pros, and of course not with any of the Mac Books, Mac Book Pros or iMacs. Today's Mac Pro has a PCIe slot format. This will not work with PCI cards. Most of us would probably not need a Mac PCIe interface. Tweak: This is the back of a Tascam FW1884, and audio interface with plenty of i/o. When comparing features like i/o be sure to check out these comparison charts Firewire interfaces generally work well with the current iMacs, MacBook Pros, Mac Minis and the Mac pro.

Keep in mind there are more audio interfaces that will work with your Mac. When considering any audio interface there are 4 things that create the perfect storm for you. You can always add on different preamps and converters to nearly any audio interface. The back panel of the MOTU 828mk3. Motu 8 pre. MacBook Pro - Optical Out. Problem with Toslink optical output - MacBook Pro 15" Unibody Mid 2009. I have the same issue. 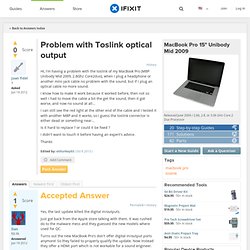 It started just after the latest software update from Apple. I've troubleshot the problem using two audio systems and another computer. The audio systems and the cable are not the issue, they work fine with the other computer, which does to have the updated software. I was on with tech support for over an hour and the issue has not been fixed. SaneBox - Email Management for Any Inbox - Free Trial. iPad Air in-depth review, benchmarks, tests. With all due respect to Microsoft and the makers of tablet PCs over the 20 years preceding its launch, the iPad was the tablet that invented the current tablet market. 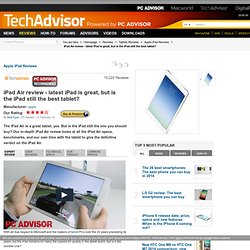 It's been with us a few years, but the iPad remains for many the byword for quality in the tablet world. But is it still number one? For Apple the challenge is simple but difficult. Once you are at the top, there is nowhere else to go. Thank You! United States Patent and Trademark Office. Concept via Yanko Design Color us a little skeptical on this one, but the U.S. 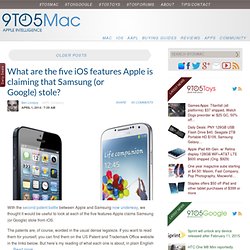 Patent Office released Patent US 20130044215 filed by Apple (via Patently Apple) on Thursday that basically described a wristwatch-like device. According to the patent application, Apple is looking into methods that integrate flexible components into a bi-stable spring, slap on bracelet design. Apple even highlighted a number of use cases for the accessory that would talk to other electronic devices, i.e., iOS devices, such as viewing recent calls, responding to text messages, managing playlists, and viewing maps: The bracelet goes far beyond being a wristwatch.

The patent application also described a number of methods of powering the wristwatch accessory including the use of a solar panel underneath the display that 9to5Mac discussed before. Apple states that the Kinetic energy gathering device noted above in patent figure 5A (# 502) has its advantages. An Audio Editor for Mac. Plug-ins & effects AudioUnits - software for Mac. HT4972 How to update ios 4.3.5 to ios 5? Ipad for DAW control. Remote Control a Mac with Screen Sharing in OS X. Mac OS X includes a great feature called Screen Sharing which allows for the remote control of a Macs display. 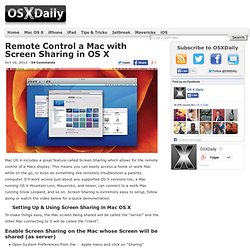 This means you can easily access a home or work Mac while on the go, or even do something like remotely troubleshoot a parents computer. It’ll work across just about any supported OS X versions too, a Mac running OS X Mountain Lion, Mavericks, and newer, can connect to a work Mac running Snow Leopard, and so on.