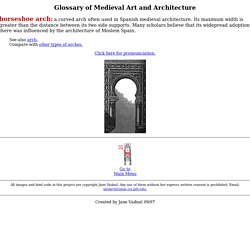 Its maximum width is greater than the distance between its two side supports. Many scholars believe that its widepread adoption there was influenced by the architecture of Moslem Spain. 3D computer modeling of the Great mosquee of Kairouan en. The 5 pillars of Islam animated in English. A short tour through the Alhambra of Granada. Calligraphy in Islamic Art.