LAG and LEAD Analytic Functions. The LAG and LEAD analytic functions were introduced in 8.1.6 to give access to multiple rows within a table, without the need for a self-join. 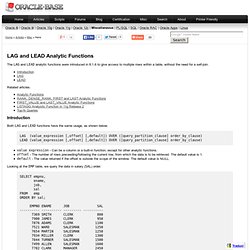 Related articles. Introduction Both LAG and LEAD functions have the same usage, as shown below. LAG (value_expression [,offset] [,default]) OVER ([query_partition_clause] order_by_clause) LEAD (value_expression [,offset] [,default]) OVER ([query_partition_clause] order_by_clause) value_expression - Can be a column or a built-in function, except for other analytic functions. offset - The number of rows preceeding/following the current row, from which the data is to be retrieved. Looking at the EMP table, we query the data in salary (SAL) order. The LAG function is used to access data from a previous row. The LEAD function is used to return data from the next row. For more information see: Hope this helps. Back to the Top. Subtracting rows variably - Oracle Forums. Originally Posted by jedwards I have rows with data showing the total amount of x. 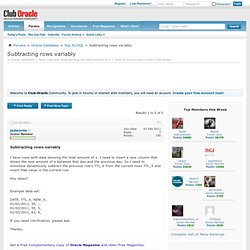 I need to insert a new column that shows the new amount of x between that day and the previous day. So I need to somehow dynamically subtract the previous row's TTL_X from the current rows TTL_X and insert that value in the current row. Any ideas? Example data set: If you need clarification, please ask. Thanks, Let us presume you have the following data in a table named mytab: Using LEAD and CASE provides the the results you desire: How to give rownumber for each group. PL/SQL Practices: On BULK COLLECT. DEVELOPER: PL/SQL Practices By Steven Feuerstein Best practices for knowing your LIMIT and kicking %NOTFOUND I have started using BULK COLLECT whenever I need to fetch large volumes of data. 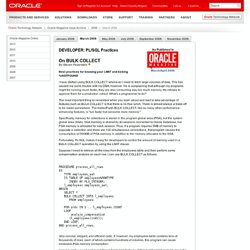 This has caused me some trouble with my DBA, however. He is complaining that although my programs might be running much faster, they are also consuming way too much memory. The most important thing to remember when you learn about and start to take advantage of features such as BULK COLLECT is that there is no free lunch. Specifically, memory for collections is stored in the program global area (PGA), not the system global area (SGA).

Fortunately, PL/SQL makes it easy for developers to control the amount of memory used in a BULK COLLECT operation by using the LIMIT clause. Suppose I need to retrieve all the rows from the employees table and then perform some compensation analysis on each row. Very concise, elegant, and efficient code. Code Listing 1: Using BULK COLLECT with LIMIT clause The statement 1. Oracle Bulk Binds (BULK COLLECT & FORALL)and Record Processing. This article is an update of one written for Oracle 8i ( Bulk Binds ) which includes new features available in Oracle 9i Release 2 and beyond. Related articles. Introduction Oracle uses two engines to process PL/SQL code. All procedural code is handled by the PL/SQL engine while all SQL is handled by the SQL statement executor, or SQL engine.

There is an overhead associated with each context switch between the two engines. In Oracle8i a collection must be defined for every column bound to the DML which can make the code rather long winded. Bulk binds can improve the performance when loading collections from a queries. Oracle Joins Where Clause Join Left Right Outer. The JOIN operation - SQLZOO. JOIN and UEFA EURO 2012 This tutorial introduces JOIN which allows you to use data from two or more tables. 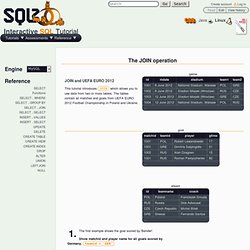 The tables contain all matches and goals from UEFA EURO 2012 Football Championship in Poland and Ukraine. The first example shows the goal scored by 'Bender'. Show matchid and player name for all goals scored by Germany. teamid = 'GER' SELECT * FROM goal WHERE player LIKE '%Bender' SELECT matchid, player FROM goal WHERE teamid LIKE 'GER' result From the previous query you can see that Lars Bender's goal was scored in game 1012. Show id, stadium, team1, team2 for game 1012 SELECT id,stadium,team1,team2 FROM game WHERE stadium LIKE '%Warsaw%' SELECT id,stadium,team1,team2 FROM game WHERE id=1012 You can combine the two steps into a single query with a JOIN. Interview Questions Open Database - GeekInterview.com.

SQL FAQ. Oracle SQL FAQ: [edit] What is SQL and where does it come from? 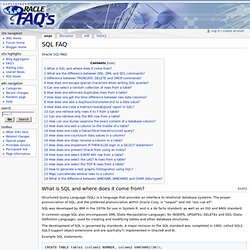 Structured Query Language (SQL) is a language that provides an interface to relational database systems. The proper pronunciation of SQL, and the preferred pronunciation within Oracle Corp, is "sequel" and not "ess cue ell". SQL was developed by IBM in the 1970s for use in System R, and is a de facto standard, as well as an ISO and ANSI standard. In common usage SQL also encompasses DML (Data Manipulation Language), for INSERTs, UPDATEs, DELETEs and DDL (Data Definition Language), used for creating and modifying tables and other database structures. The development of SQL is governed by standards. Example SQL statements: CREATE TABLE table1 (column1 NUMBER, column2 VARCHAR2(30)); INSERT INTO table1 VALUES (1, 'XYZ'); SELECT * FROM table1 WHERE column2 = 'XYZ'; [edit] What are the difference between DDL, DML and DCL commands? DDL - Data Definition Language: statements used to define the database structure or schema. Escape quotes 1.