Watch?v=voX0gUn_JOI&feature=youtu. Charles Duhigg: How 'Keystone Habits' Transformed a Corporation. Social brain superpowers. Multi-tasking. Memory. Creative Disobedience: How, When, & Why to Break the Rules. Q & A for Sex Sleep Eat Drink Dream : book; Q: Is it true that we can tell time in our sleep?

There is support for the power nap in here. Another book with power nap support is: The Power of Full Engagement: Managing Energy, Not Time, Is the Key to High Performance and Personal Renewal – finneycanhelp 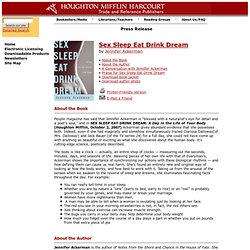 This is why we sometimes wake up two or three minutes before the alarm goes off, an amazing feat when you think about it. However, the brain’s performance in the first half hour after waking is worse than it is if you’ve been up for 24 hours. And as for that morning cup of joe, the caffeine works not by exciting nerve cells but by foiling the process by which they are calmed.

Q: When is your brain at its peak performance? A: For many of us, late morning is the optimal time for mental performance, though it varies depending on whether you’re a lark or an owl: Alertness and memory—the ability to think clearly and learn—can vary by as much as 30 percent over the course of the day. Q: You talk about the body being rhythmic. A: Our bodies beat to the drum of a 24-hour circadian rhythm. Q: Just what are larks and owls? A: Well, the world divides between those who shine at dawn and those who side with the night. Brain Workshop - a Dual N-Back game. Introduction - Download - Tutorial - Details & Options - Donate Dual N-Back exercise featured in Brain Workshop was the subject of an April 2008 peer-reviewed scientific study which shows that practicing the Dual N-Back task for 20 minutes 4-5 days per week will improve your working memory (short term memory) and fluid intelligence. 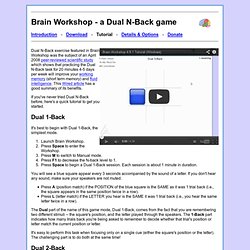 You will see a blue square appear every 3 seconds accompanied by the sound of a letter. It's easy to perform this task when focusing only on a single cue (either the square's position or the letter).

Brain Food. It's common to resolve to lose weight, but any sane person dreads a diet's dulling effect on the brain. 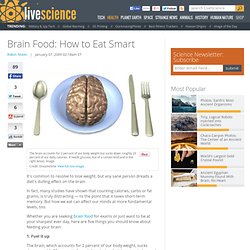 In fact, many studies have shown that counting calories, carbs or fat grams, is truly distracting — to the point that it taxes short-term memory. But how we eat can affect our minds at more fundamental levels, too. Whether you are seeking brain food for exams or just want to be at your sharpest ever day, here are five things you should know about feeding your brain: 1. Fuel it up The brain, which accounts for 2 percent of our body weight, sucks down roughly 20 percent of our daily calories. More recently evolved areas of the brain, such as the frontal cortex (it's like the CEO of the brain), are particularly sensitive to falling glucose levels, while brain areas regulating vital functions are more hardy, said Leigh Gibson of Roehampton University in England. This is not to suggest that we should constantly slurp soda to keep our brains functioning optimally. Earworms. It has happened to you. 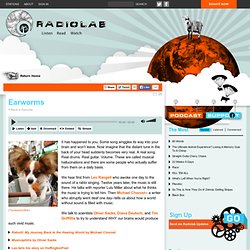 Some song wriggles its way into your brain and won't leave. Now imagine that the distant tune in the back of your head suddenly becomes very real. A real song. Real drums. Real guitar. We hear first from Leo Rangell who awoke one day to the sound of a rabbi singing. We talk to scientists Oliver Sacks, Diana Deutsch, and Tim Griffiths to try to understand WHY our brains would produce such vivid music.