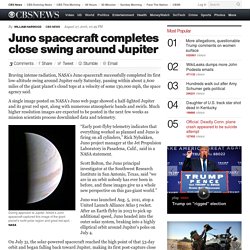 A single image posted on NASA’s Juno web page showed a half-lighted Jupiter and its great red spot, along with numerous atmospheric bands and swirls. Much higher resolution images are expected to be posted in the next few weeks as mission scientists process downlinked data and telemetry. “Early post-flyby telemetry indicates that everything worked as planned and Juno is firing on all cylinders,” Rick Nybakken, Juno project manager at the Jet Propulsion Laboratory in Pasadena, Calif., said in a NASA statement. Juno was launched Aug. 5, 2011, atop a United Launch Alliance Atlas 5 rocket.

Incredible! After a 5-year journey, we're up close and personal with our solar system's largest planet. Welcome to Jupiter, @NAS… Behind every great spacecraft are great people. @NASAJuno team + spacecraft stencil at the @RoseBowlStadium. And yet it moves. What Galileo saw through his telescope, I captured on approach to #Jupiter. Juno.