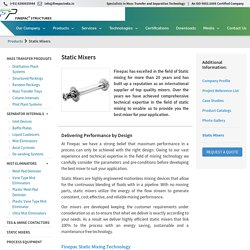 Owing to our vast experience and technical expertise in the field of mixing technology we carefully consider the parameters and pre-conditions before developing the best mixer to suit your application. Static Mixers are highly engineered motionless mixing devices that allow for the continuous blending of fluids with in a pipeline. With no moving parts, static mixers utilize the energy of the flow stream to generate consistent, cost-effective, and reliable mixing performance. Our mixers are developed keeping the customer requirements under consideration so as to ensure that what we deliver is exactly according to your needs.

Distillation Equipment – Finepac Structures. Industrial units are comprised of several procedures, out of which the separation process is but one. 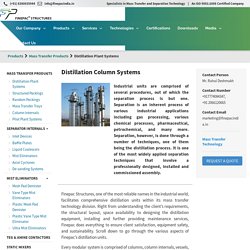 Separation is an inherent process of various industrial applications including gas processing, various chemical processes, pharmaceutical, petrochemical, and many more. Separation, however, is done through a number of techniques, one of them being the distillation process. It is one of the most widely applied separation techniques that involve a professionally designed, installed and commissioned assembly. Distillation Column Systems. Finepac Stuctures — Get The Plastic Mesh Pad Demister. Column Packing From Finepac. Column systems are an integral part of the petrochemical industry. 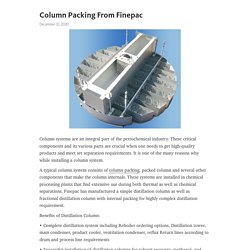 These critical components and its various parts are crucial when one needs to get high-quality products and meet set separation requirements. It is one of the many reasons why while installing a column system. A typical column system consists of column packing, packed column and several other components that make the column internals. These systems are installed in chemical processing plants that find extensive use during both thermal as well as chemical separations. Pall Rings Manufacturer and Supplier India - Finepac Structures. Glycol contactor for Gas Dehydration System. Water vapor is the most common undesirable impurity in gas streams. 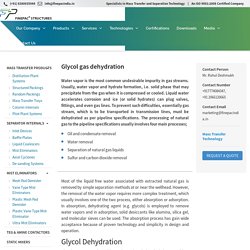 Usually, water vapor and hydrate formation, i.e. solid phase that may precipitate from the gas when it is compressed or cooled. Liquid water accelerates corrosion and ice (or solid hydrates) can plug valves, fittings, and even gas lines. To prevent such difficulties, essentially gas stream, which is to be transported in transmission lines, must be dehydrated as per pipeline specifications. Distillation Equipment – Finepac Structures. Biodiesel Plant Manufacturer. Distillation Column. Distillation is a well-known method for purification of liquids or liquid mixture separations into their unit forms. 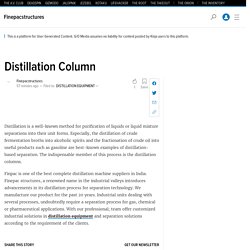 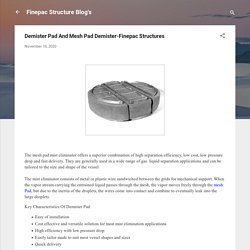 They are generally used in a wide range of gas liquid separation applications and can be tailored to the size and shape of the vessel The mist eliminator consists of metal or plastic wire sandwiched between the grids for mechanical support. When the vapor stream carrying the entrained liquid passes through the mesh, the vapor moves freely through the mesh Pad, but due to the inertia of the droplets, the wires come into contact and combine to eventually leak into the large droplets. Key Characteristics Of Demister Pad Easy of installationCost effective and versatile solution for most mist elimination applicationsHigh efficiency with low pressure dropEasily tailor made to suit most vessel shapes and sizesQuick delivery. 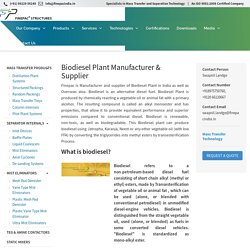 Biodiesel is an alternative diesel fuel. Biodiesel Plant is produced by chemically reacting a vegetable oil or animal fat with a primary alcohol. The resulting compound is called an alkyl monoester and has properties, that allow it to provide equivalent performance and superior emissions compared to conventional diesel. Biodiesel is renewable, non-toxic, as well as biodegradable. This Biodiesel plant can produce biodiesel using Jatropha, Karanja, Neem or any other vegetable oil (with low FFA) by converting the triglycerides into methyl esters by transesterification Process.

Biodiesel refers to a non-petroleum-based diesel fuel consisting of short chain alkyl (methyl or ethyl) esters, made by Transesterification of vegetable oil or animal fat , which can be used (alone, or blended with conventional petrodiesel) in unmodified diesel-engine vehicles. Distillation Equipment – Finepac Structures. Different Methods of Gas Dehydration and Process of Extraction. Use the Right Catalyst and Reactors Producing Biofuel Article.

There are different blends of biodiesel, and the biodiesel-based products are distributed to the marketplace for various purposes. 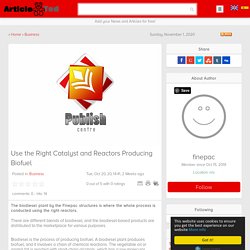 The distillation column is important equipment for crude oil refining. 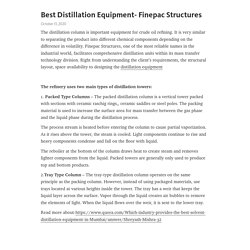 It is very similar to separating the product into different chemical components depending on the difference in volatility. Finepac Structures, one of the most reliable names in the industrial world, facilitates comprehensive distillation units within its mass transfer technology division. Right from understanding the client’s requirements, the structural layout, space availability to designing the distillation equipment The refinery uses two main types of distillation towers: 1. Pall Ring- Finepac Structures. Biodiesel Plant. Distillation Unit. Industrial units c onsist of several procedures, among which the separation process is only one. 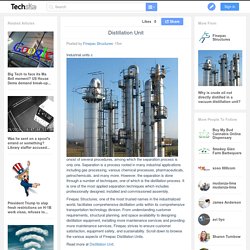 Separation is a process rooted in many industrial applications including gas processing, various chemical processes, pharmaceuticals, petrochemicals, and many more. However, the separation is done through a number of techniques, one of which is the distillation process. It is one of the most applied separation techniques which includes professionally designed, installed and commissioned assembly. Finepac Structures, one of the most trusted names in the industrialized world, facilitates comprehensive distillation units within its comprehensive transportation technology division. Static Mixers Manufacturer India - Finepac Structures. Distillation Column and Distillation Unit the Industrial Refining Process. Distillation is a widely used separation method used in Industries for several procedures. It is a widely used separation technology where separate components and substances are separated. Made of different components distillation columns are used to transfer the heat energy for the transfer of the material.

Finepac Structures Pvt. Ltd. is one of the leading Static Mixer suppliers in Ind. For every chemical, process mixing is an essential part of the industry. A perfect blending helps cost-effectively and provides multiple solutions for businesses. The Static mixer suppliers in India offer a unique way of mixing where the materials are mixed through blades properly in dynamic mixers. For an enhanced production and process control in addition to cost maintenance within the downtime, the static Mixer helps in mixing the paste, liquid, slurry, or gas etc. There is no problem in support, and exceptional durability is offered by the reputed Static mixer suppliers in India. The renowned static Mixer has multiple benefits: Free Maintenance: The Mixers are specifically tailored and built for durability by using industrial-grade materials to the application.

You get the best distillation type among Pune's equipment manufacturers for Finepac. Our main objective is to provide industry standards. Why is gas dehydration necessary? Promising growth over the impact of COVID: Column Packing Industry in the next 5 years. By Insights reports and summary it is analyzed that the column Packing market makes an intensive report with the vertical patterns in various locales.

What Is Structured Packing? Different Types Of Structured Packings. Find Column Packing. Find Distillation Machine Supplier- Finepac. Distillation is a known method for purifying liquid or liquid mixture separation in unit form. In particular, distilling crude fermentation broth with an alcoholic distillate and classifying crude oil into useful products such as gasoline are the most well-known examples of distillation-based separation. Random Packing manufacturer- Finepac Structures in Pune. Distillation Column Systems. Get To Know About Pall Ring- finepac Structures - engineering.over-blog.com. All To Know About Static Mixers- Finepac Structures - Finepac Structures. Static mixers can be applied to a wide range of process operations including dosing, dispersion, laminar heat exchange, and emulsion formation. They offer many key benefits when mixing liquids, gases, and powders and are tested, tested, and trusted in a variety of industries. Mixing action is achieved by continuous separation, expansion, and transport of the components.