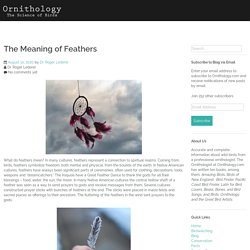 Message About the CNC - Birds Calgary. Matthew Wallace, who has done such a great job of organizing the Calgary City Nature Challenge for the past two years, would like to encourage everyone with an interest in nature to participate. 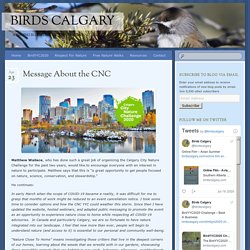 Matthew says that this is “a great opportunity to get people focused on nature, science, conservation, and stewardship.” He continues: In early March when the scope of COVID-19 became a reality, it was difficult for me to grasp that months of work might be reduced to an event cancellation notice. I took some time to consider options and how the CNC YYC could weather this storm. Since then I have updated the website, hosted webinars, and adapted public messaging to promote the event as an opportunity to experience nature close to home while respecting all COVID-19 advisories.

Bird Savers – Ornithology. Ornithology.com is a fairly popular website and ranks high on Google, so I receive regular emails from people who want to write articles for me. 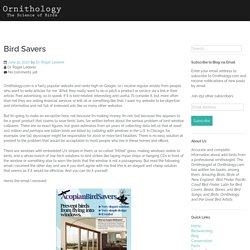 What they really want to do is pitch a product or service via a link in their article. Free advertising, so to speak. If it is bird-related, interesting and useful, I’ll consider it, but more often than not they are selling financial services or krill oil or something like that. I want my website to be objective and informative and not full of irrelevant ads like so many other websites.

Birding and the City Nature Challenge - Birds Calgary. I mentioned before that a smartphone is the best tool for taking photos of insects and getting close-ups of plants, but not great for birds since they are usually too far away. 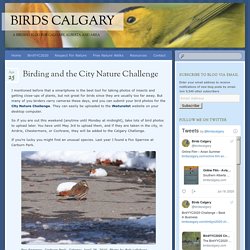 But many of you birders carry cameras these days, and you can submit your bird photos for the City Nature Challenge. They can easily be uploaded to the iNaturalist website on your desktop computer. So if you are out this weekend (anytime until Monday at midnight), take lots of bird photos to upload later. Sounds like….. – Ornithology. OK, what bird makes this call: honk, honk, tweeeeet, twitter twitter, buzzzzzz. 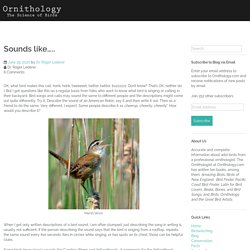 Stay-At-Home Birding: Some Backyard Birds - Birds Calgary. Janet Turner, Bird Artist – Ornithology. The following is from my latest book, The Art of the Bird: The History of Ornithological Art through Forty Artists. 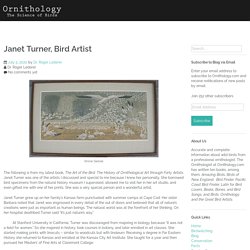 Janet Turner was one of the artists I discussed and special to me because I knew her personally. She borrowed bird specimens from the natural history museum I supervised, allowed me to visit her in her art studio, and even gifted me with one of her prints. She was a very special person and a wonderful artist. Janet Turner grew up on her family’s Kansas farm punctuated with summer camps at Cape Cod. Her sister Barbara noted that Janet was engrossed in every detail of the out of doors and believed that all of nature’s creations were just as important as human beings. At Stanford University in California, Turner was discouraged from majoring in biology because “it was not a field for women.” Turner experimented with different forms and subjects of art, with birds as her main focus. Calgary City Nature Challenge Results - Birds Calgary. Posted by Bob Lefebvre Back in April, Calgarians participated for the second time in the City Nature Challenge. 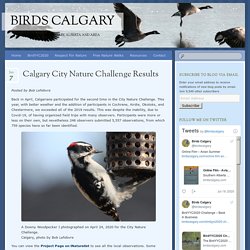 This year, with better weather and the addition of participants in Cochrane, Airdie, Okotoks, and Chestermere, we exceeded all of the 2019 results. This was despite the inability, due to Covid-19, of having organized field trips with many observers. Participants were more or less on their own, but nevetheless 248 observers submitted 5,557 observations, from which 759 species have so far been identified. You can view the Project Page on iNaturalist to see all the local observations. Rehabilitation – Ornithology. About once a week I get contacted through my website Ornithology.com regarding a baby bird. 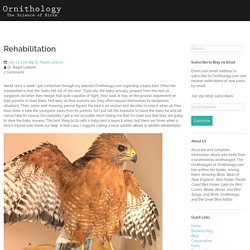 Often the explanation is that the “baby fell out of the nest.” Typically, the baby actually jumped from the nest as songbirds do when they fledge. Green-tailed Towhee - Birds Calgary. Posted by Bob Lefebvre. 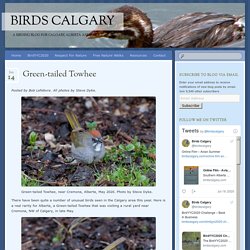 All photos by Steve Dyke. There have been quite a number of unusual birds seen in the Calgary area this year. Bird Blogs – Ornithology. There’s a new, to me at least, podcast about birds called Bird Banter. 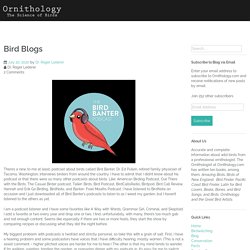 Dr. BirdYYC2020 Challenge - Back In Business - Birds Calgary. Posted by Bob Lefebvre. Eponymous and Other Bird Names – Ornithology. In 1851, John P. McCown, an amateur ornithologist and army officer stationed in Texas, shot a group of birds. Examining his kills, he noted two birds he’d never seen before and sent specimens to an ornithologist friend, who named it McCown’s Longspur. Ten years later, McCown joined the Confederate States Army, where he was ultimately promoted to Major General and commanded multiple armies; the only member of the Confederate armies whose name is borne by a bird. Fair enough. If we are going to remove statues and flags of the Confederacy, maybe we should remove those names from birds as well. And then there’s this article in The Allegheny Front which argues that some bird names are verbal statues for birds and sought to be changed. Online Film - Avian Summer - Birds Calgary. Posted by Bob Lefebvre Photographer and filmmaker Rick Andrews has produced a wonderful wildlife documentary about some of our local birds.

Avian Summer has fantastic high-resolution video of birds that migrate into Southern Alberta each spring, where they come to find a mate and raise the next generation, before migrating south again in the fall. Watch the trailer below. The full film is available to rent or purchase on the Vimeo platform. The First Bird Guides – Ornithology. It wasn’t until my junior year in college when I took ornithology and started watching birds. My first bird guide was a Peterson. We didn’t ask for a bird guide when we wanted to look up that bird on the fence post, we asked for a Peterson. If you were a serious birdwatcher, you had a Peterson with little stick-on tabs marking the pages so you could go to the sparrows or shorebirds quickly. People have always watched birds but until the late 18th century, interest in birds revolved mainly around their use as food.