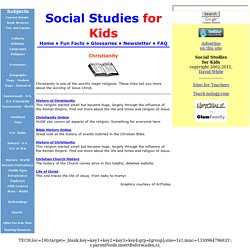 These links tell you more about the worship of Jesus Christ. Religion: Christianity. World Religions. Contents How did Christianity begin? 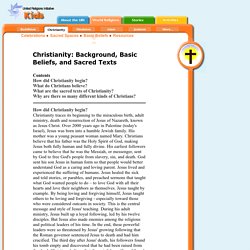 What do Christians believe? What are the sacred texts of Christianity? Why are there so many different kinds of Christians? How did Christianity begin? Christianity traces its beginning to the miraculous birth, adult ministry, death and resurrection of Jesus of Nazareth, known as Jesus Christ. 131 FUN-damental Facts for Catholic Kids.

I am Protestant. Girls Who Choose God: Stories of Strong Women from the Book of Mormon. What is Christianity? Jesus, Religion, God. Christian Mother. Loyola Kid Books of Saints. Christianity in Mexico. I Am Eastern Orthodox. Martin Luther: A Man Who Changed the World. The Kids Book of World Religions. Study shows drop in number of U.S. Christians, rise in nonreligious. WASHINGTON — The United States has become significantly less Christian in the last eight years, a major new study found. 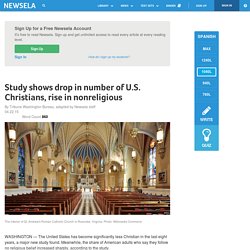 Meanwhile, the share of American adults who say they follow no religious belief increased sharply, according to the study. For what is likely the first time in U.S. history, the actual number of American Christians has declined. Christianity, however, remains by far the nation’s main religious tradition, according to the report. The study was conducted by the Pew Research Center. The erosion in traditional religious ranks seems likely to continue.

Settlement: The Origins and Legacy of the Pennsylvania Quakers. Strong religious beliefs of the Quakers contributed greatly to "civilized" American culture and society. 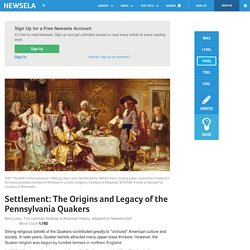 In later years, Quaker beliefs attracted many upper-class thinkers. However, the Quaker religion was begun by humble farmers in northern England. In 1649, following a decade-long civil war, the Puritans convicted King Charles I of treason and cut off his head. There were to be no more kings or queens. Branches2.