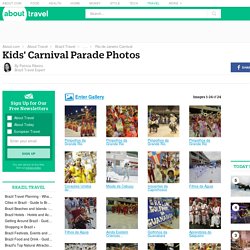 Some of Rio's top samba schools - the ones in the Special Group - have junior offshoots. Besides engaging kids in preparations for the parade itself, junior samba schools provide them with other learning and leisure opportunities during the year. The samba schools' commitment to inclusion is clear in the parade, a fun occasion for kids with special needs. Unfortunately, like children in beauty pageants, a few kids in the parade are dressed up in an adultified way. In rejection of the sexualization and adultification of children and of the diffusion of such images, yet in fair recognition of the league's positive points, this photo gallery from Carnival 2011 only features kids enjoying the parade as the kids they still are.

Carnival Costumes for Rio de Janeiro Carnival 2017 Samba Parade. Your best carnival experience starts when you decide to be part of the Rio Carnival Parade with a real samba costume. 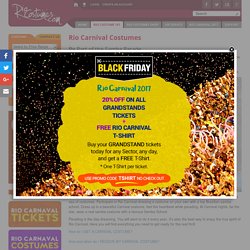 There is no better way to experience the heartbreaking samba beats than to parade down the world’s biggest “stage” yourself, dressed with a samba school costume. Watching from the sidelines is exhilarating just in itself, but taking part in the event is a cultural experience that will be remembered for ever. Join this coming together of Brazilian music, poetry, dance, theatre, gigantic decorated floats and a veritable sea of costumes. Participate in Rio Carnival dressing a costume on your own with a top Brazilian samba school. Dress up in a beautiful Carnival costume, feel the heartbeat while parading.

Carnival (Holidays and Festivals) Carnival at Candlelight. Brazil for Kids. Children Just Like Me: Celebrations. Carnival Rio de Janeiro Stunning Parade! Living In... Brazil. 2014 Trinidad Children Carnival. Carnival For Kids. Rio Carnival does seem to be a party for adults. 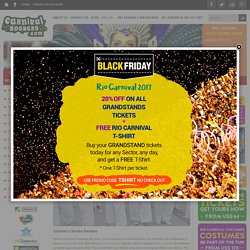 On the main days of parade, Friday untill Monday, kids under 5 years old are not allowed to get in the sambadrome. However, there are a few special events for children to enjoy. In addition there are attractions around the city perfect for kids whether visiting during the Carnival or another time of year. Events for children during the Rio de Janeiro Carnival, such as the Children's Parade. Held on Carnival Tuesday, the kids’ parade is also a wonderful show. The Rio Carnival Samba parades are a real sight to behold and children should enjoy watching these shows. In Rio there is a Bloco made for children.

Other Attractions As Samba is such a big part of the Rio Carnival it might be fun to arrange for children to take some Samba lessons along with mom and dad. The long avenues in front of Flamengo, Ipanema, Copacabana and Leblon beaches are closed during special events and on Sundays. 760 brazil today carnaval 0. Brazilian Carnival Crafts for Kids. Brazil Carnaval for Kids: Costumes and Music! People are fascinated by the Brazil Carnaval: the floats, the dancers, the music. 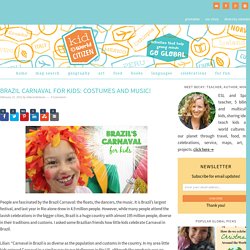 It is Brazil’s largest festival, and last year in Rio alone drew in 4.9 million people. However, while many people attend the lavish celebrations in the bigger cities, Brazil is a huge country with almost 195 million people, diverse in their traditions and customs. I asked some Brazilian friends how little kids celebrate Carnaval in Brazil. Lilian: “Carnaval in Brazil is as diverse as the population and customs in the country. In my area little kids enjoyed Carnaval in a similar way to our Halloween in the US, although the emphasis was on dressing up (and nothing scary for the most part). So each area of Brazil may have their more typical hits and songs. This may be confusing, but I really don’t like stereotypes. Taken and photostitched by Michael Baldwin, on 25-Fev-2006, at the Sambódromo, Rio de Janeiro, 2006 (creative commons use permitted). Dani: “I agree 100% with Lilian!