Why the film industry needs to destroy its digital content. Before you shout, “ACTION! 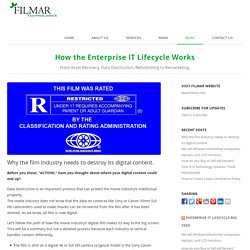 ,” have you thought about where your digital content could end up? The movie industry does not know that the data on cameras like Sony or Canon 35mm full HD camcorders used to make movies can be recovered from the film after it has been deleted. As we know, all film is now digital. Let’s follow the path of how the movie industry’s digital film makes its way to the big screen. This will be a summary but not a detailed process because each industry or vertical handles content differently. The film is shot on a digital 4k or full HD camera (a typical model is the Sony Canon Cinema Series) on solid-state hard drives, CF cards, SD cards, and HDD drives. Great caution must be exercised to control the transfer of digital and sound editing. Your K12 Technology Solution: Think Refurbished! Your K12 Technology Solution For a K12 Technology Solution one doesn’t have to look far into the American Educational System to find places where a shortage of funds has led to an impact on students and teachers. 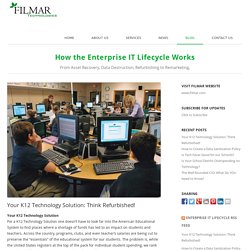 Across the country, programs, clubs, and even teacher’s salaries are being cut to preserve the “essentials” of the educational system for our students. The problem is, while the United States registers at the top of the pack for individual student spending, we rank near the middle when it comes to actual student performance. How can our schools stem the bleeding? With school districts competing with one another to keep up with new technology trends, it can be hard to know where to start.

Refurbished Computers Last. What is a Disk and Data Sanitization Policy? We’ve heard a lot about a private email server in the news lately that was deleted that may have had classified data stored on it. 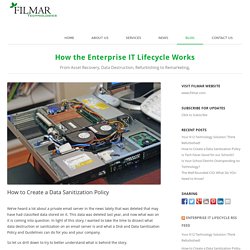 Refurbished Technology Hardware the Myths and Truths. As consumers of computer hardware and electronics, Americans demonstrate a hyper obsession with the latest and greatest technology hardware. 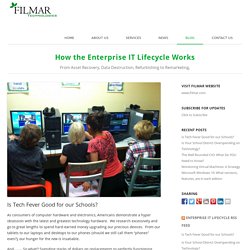 We research excessively and go to great lengths to spend hard-earned money upgrading our precious devices. From our tablets to our laptops and desktops to our phones (should we still call them “phones” even?) Is Your School District Overspending on Technology. Technology Overspending. 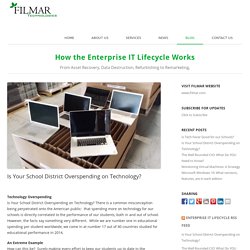 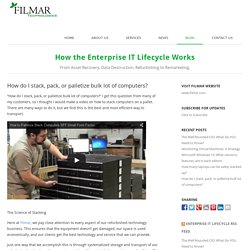 The Well Rounded CIO: What Do YOU Need to Know? What are all the different editions or versions of Windows 10. Helps you adapt as you grow Technology should reduce costs and enable business growth—not restrict your choices. 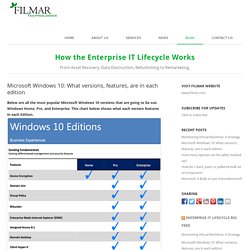 With Windows 10, you can run your apps on-site, in the cloud, or both, on the devices that best suit your business. Use your existing domain or move to single sign-on across Windows, Office 365, OneDrive, the Windows Store, and more. Use the Business Store to acquire and manage Windows apps, which can be integrated with your existing device management solutions for simplified management. Connect with your colleagues and customers. How many laptops can be safely stacked up? - How the Enterprise IT Lifecycle Works. Lenovo Battery Recall - How the Enterprise IT Lifecycle Works. I wanted to share this in the community that recently Lenovo has extended its original recall notice on its ThinkPad batteries. 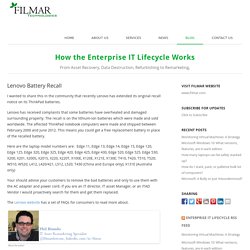 Lenovo has received complaints that some batteries have overheated and damaged surrounding property. The recall is on the lithium-ion batteries which were made and sold worldwide. The affected ThinkPad notebook computers were made and shipped between February 2000 and June 2012. This means you could get a free replacement battery in place of the recalled battery. Microsoft: A Bully or just misunderstood? - How the Enterprise IT Lifecycle Works. “Hey, kid, better upgrade or else!” 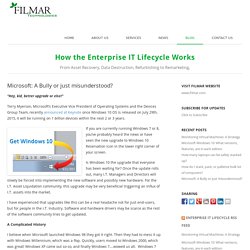 Terry Myerson, Microsoft’s Executive Vice President of Operating Systems and the Devices Group Team, recently announced at Keynote once Windows 10 OS is released on July 29th, 2015, it will be running on 1 billion devices within the next 2 or 3 years. If you are currently running Windows 7 or 8, you’ve probably heard the news or have seen the new upgrade to Windows 10 Reservation icon in the lower right corner of your screen. How do I stack, pack, or palletize bulk lot of computers? - How the Enterprise IT Lifecycle Works.

Monitoring Virtual Machines: A Strategy. If you have exceptionally adept users of your technologies, you may have run into the issue of users circumventing certain policies and limitations by creating multiple virtual machines that have no limits on their usage. 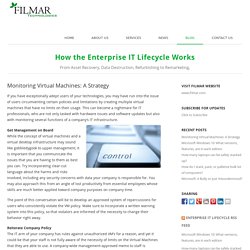 This can become a nightmare for IT professionals, who are not only tasked with hardware issues and software updates but also with monitoring several functions of a company’s IT infrastructure. Get Management on Board While the concept of virtual machines and a virtual desktop infrastructure may sound like gobbledygook to upper management, it is important that you communicate the issues that you are having to them as best you can. Try incorporating clear-cut language about the harms and risks involved, including any security concerns with data your company is responsible for. You may also approach this from an angle of lost productivity from essential employees whose skills are much better applied toward company purposes on company time.

Reiterate Company Policy. How do you refurbish a computer? How to Refurbish a Computer: A Step-by-Step Process Valuation refurbishment of IT equipment is a pretty interesting process. Each stage in the refurbishment process requires specific skills from a number of employees. Distribution, data wiping, sanitization, software installation, testing, packaging, sales and many more processes are required to properly refurbish and remarket a computer or laptop.

Common Stages in the Refurbishment Process: Microsoft Windows 10: What versions, features, are in each edition.