How Russia Defeated Western Journalism. Do you think that the government in Ukraine was overthrown in a violent, Western-backed putsch, and the new government in Kyiv is dominated by far-right radicals? 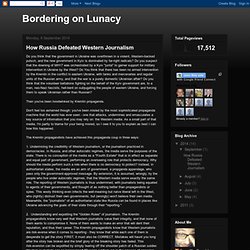 Do you suspect that the downing of MH17 was orchestrated by a Kyiv "junta" to garner support for military intervention in Ukraine by the West? Do You think that there has been no armed intervention by the Kremlin in the conflict in eastern Ukraine, with tanks and mercenaries and regular units of the Russian army, and that the war is a purely domestic Ukrainian affair? Do you think that the volunteer battalions fighting on the behalf of the Kyiv government are, to a man, neo-Nazi fascists, hell-bent on subjugating the people of eastern Ukraine, and forcing them to speak Ukrainian rather than Russian? Then you've been hoodwinked by Kremlin propaganda. The Kremlin propagandists have achieved this propaganda coup in three ways: 1. 2. 3. That is why Russian propaganda has defeated Western journalism.

Putin’s libertarians. Guest post from our Russian correspondent, Mikhail Svetov I DECIDED TO WRITE THIS after I noticed that western libertarians have unaccountably developed a soft spot for Russian president Vladimir Putin. 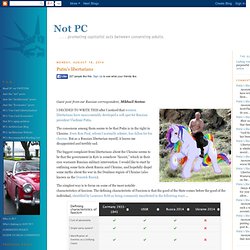 The consensus among them seems to be that Putin is in the right in Ukraine. Even Ron Paul, whom I normally admire, has fallen for his charms. But as a Russian libertarian myself, it leaves me disappointed and terribly sad. The biggest complaint from libertarians about the Ukraine seems to be that the government in Kyiv is somehow “fascist,” which in their eyes warrants Russian military intervention. The simplest way is to focus on some of the most notable characteristics of fascism. 1) Cult of Personality Putin’s cult of personality is central to the people’s attitude toward his regime as a whole. 3) Identification of Enemies as a Unifying Cause In Russia “war on traitors” is rampant and spreading to every corner of our society.

Myth #9: ISIS is invincible - The 9 biggest myths about ISIS. Reading the news of ISIS's conquests in Iraq and Syria, and even its recent foray into Lebanon, you might get the sense that ISIS is unstoppable. 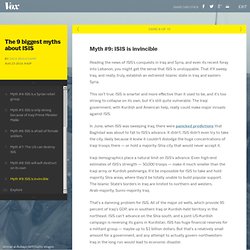 That it'll sweep Iraq, and really, truly, establish an extremist Islamic state in Iraq and eastern Syria. This isn't true. ISIS is smarter and more effective than it used to be, and it's too strong to collapse on its own, but it's still quite vulnerable. The Iraqi government, with Kurdish and American help, really could make major inroads against ISIS. In June, when ISIS was sweeping Iraq, there were panicked predictions that Baghdad was about to fall to ISIS's advance. Iraqi demographics place a natural limit on ISIS's advance. That's a damning problem for ISIS. A guard at a Kurdish oil facility. "It'd be a permanent downward economic spiral — like Gaza, basically," Kirk Sowell, a risk analyst and Iraq expert, says.

Meanwhile, ISIS may alienate some its core Iraqi allies: militias who support a Saddam-style Sunni dictatorship. Haunting pictures inside North Korea... taken by a photographer who has now been banned from the rogue state for life. Photographer Eric Lafforgue took the 'banned' images during a visit to North Korea earlier this yearForbidden subjects include malnourished people, child labourers and a man collecting grass to eatOther photos that incurred the wrath of the regime included a shot of soldiers pushing a broken-down busLafforgue says poverty is rare in Pyongyang because only the elite live there but things are tough elsewhere By Ruth Styles Published: 12:18 GMT, 9 May 2014 | Updated: 15:33 GMT, 9 May 2014 From children working hard in the fields to a group of soldiers pushing a broken-down bus, these are the photographs that North Korean leader, Kim Jong Un, didn't want you to see. 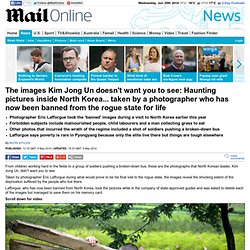 Taken by photographer Eric Lafforgue during what would prove to be his final visit to the rogue state, the images reveal the shocking extent of the deprivation suffered by the people who live there. Scroll down for video Multi-purpose: 'The North Korean army is said to be one of the most important in the world. No photos! What Putin Has to Say to Americans About Syria. Cramped Hong Kong Apartments from Above. Feb 21, 2013 Founded in 1972, the Society for Community Organization (SoCO) in Hong Kong recently released this series of startling photographs that show the cramped living conditions of residents by shooting entire ‘apartments’ from above. 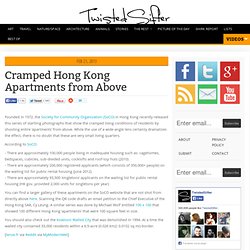 While the use of a wide-angle lens certainly dramatizes the effect, there is no doubt that these are very small living quarters. According to SoCO: - There are approximately 100,000 people living in inadequate housing such as: cagehomes, bedspaces, cubicles, sub-divided units, cocklofts and roof-top huts (2010) - There are approximately 200,000 registered applicants (which consists of 350,000+ people) on the waiting list for public rental housing (June 2012) - There are approximately 93,500 ‘singletons’ applicants on the waiting list for public rental housing (HK gov. provided 2,000 units for singletons per year) You can find a larger gallery of these apartments on the SoCO website that are not shot from directly above here. Where Children Sleep. International Defence & Security Programme.