Earth - How do we know that evolution is really happening? Evolution is one of the greatest theories in all of science. 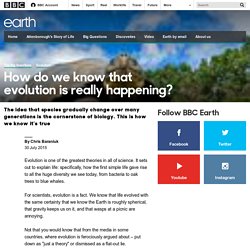 It sets out to explain life: specifically, how the first simple life gave rise to all the huge diversity we see today, from bacteria to oak trees to blue whales. For scientists, evolution is a fact. We know that life evolved with the same certainty that we know the Earth is roughly spherical, that gravity keeps us on it, and that wasps at a picnic are annoying.

Not that you would know that from the media in some countries, where evolution is ferociously argued about – put down as "just a theory" or dismissed as a flat-out lie. Why are biologists so certain about this? It might help to first spell out quickly what Darwin's theory of evolution actually says. It is hard to accept that you are descended, through countless generations, from a worm Darwin's theory of evolution says that each new organism is subtly different from its parents, and these differences can sometimes help the offspring or impede it. This may seem odd. Evolution myths: Evolution cannot be disproved. By Michael Le Page There are all sorts of findings and experiments that could have falsified evolution. 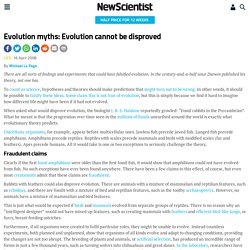 In the century-and-a-half since Darwin published his theory, not one has To count as science, hypotheses and theories should make predictions that might turn out to be wrong. In other words, it should be possible to falsify these ideas. The Predictive Power of Evolutionary Biology and the Discovery of Eusociality in the Naked Mole Rat. Anti-evolutionists have asserted that evolutionary biology lacks predictive power (Gish 1979; Johnson 1991; Morris 1974, 1989). 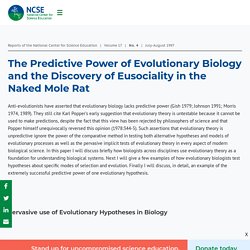 In this paper I will discuss briefly how biologists across disciplines use evolutionary theory as a foundation for understanding biological systems. HOW EVOLUTION WORKS: THE BASIC IDEA. Many believers in God (Christians, Muslims, others) ridicule the Theory of Evolution. 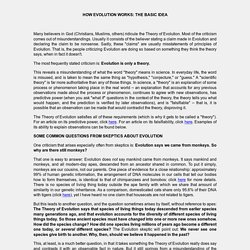 Most of the criticism comes out of misunderstandings. Usually it consists of the believer stating a claim made in Evolution and declaring the claim to be nonsense. Scitechdaily. A skeleton of an island fox. 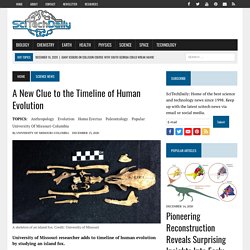 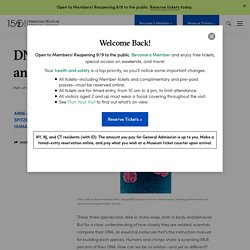 Reopening 9/9 to the public. Become a Member and enjoy free tickets, special access on weekends, and more! Your health and safety is a top priority, so you'll notice some important changes: All tickets—including Member tickets and complimentary and pre-paid passes—must be reserved online.All tickets are for timed entry, from 10 am to 4 pm, to limit attendance.All visitors aged 2 and up must wear a facial covering throughout the visit.See Plan Your Visit to find out what's on view. NY, NJ, and CT residents (with ID): The amount you pay for General Admission is up to you. The Mitochondrial Eve: Have Scientists Found the Mother of Us All? MHRC. In 1987, A world wide survey of human mitochondrial DNA (mtDNA) was published by Cann, Stoneking, and Wilson in Nature magazine.

Its main point was that "all mitochondrial DNAs stem from one woman" and that she probably lived around 200,000 years ago in Africa. When the media picked up from Wilson, one of the authors of the paper, that they had found the "Mitochondrial Eve" or "African Eve", the story became a sensation. Have scientists found "the mother of us all"? Most people know about the nuclei of cells and that the genetic inheritance from both parents are found in the nucleus. Humans have 46 chromosomes which they inherit from both their parents. What does "Mitochondrial Eve" Mean? (with pictures) No, a Mitochondrial "Eve" Is Not the First Female in a Species.

Recently, researchers made waves with the announcement that they had found the mother of all sperm whales: that is, the female from whom all modern sperm whales are descended. 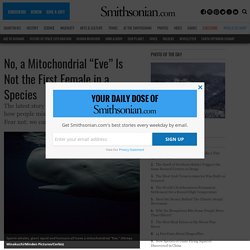 "Sperm Whales Have an ‘Eve,’” ran the news headlines, capitalizing on the biblical idea of the “first woman.” The idea of a mitochondrial "Eve” is not new; researchers often use it to refer to the first female genetic ancestor of a species. The problem is, most people misunderstand exactly what the term means, thinking it means the very first female in a species. In fact, the sperm whale “Eve” arose far later than the first sperm whale.

New species of tiny tyrannosaur foreshadows rise of T. rex. A billion-year-old seaweed fossil has completely rewritten ancient history. Paleontologists announced on Monday the discovery of a billion-year-old green seaweed fossil, evidence of something way older than land-based plants, an ancestor to everything that grows on Earth. 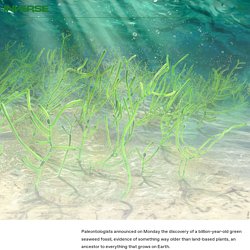 In a study published in the journal Nature Ecology & Evolution , researchers from Virginia Tech write that the seaweed, Proterocladus antiquus, is likely the ancestor of the very first land-based plants and trees on Earth, which showed up around 450 million years ago. Scientists found this seaweed microfossil in a rock near the city of Dailan in northern China, and the seaweeds are tiny, at around 2 millimeters long. Despite their size, these early algae may have paved the way for the earliest plant species to evolve 650 million years later. (A few) transitional fossils. No. There is No "Missing Link" in Human Evolution. Anyone familiar with evolution knows that humans (relatively complex organisms) evolved from simpler forms of life over the course of billions and billions of years. 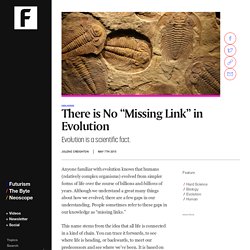 Although we understand a great many things about how we evolved, there are a few gaps in our understanding. People sometimes refer to these gaps in our knowledge as “missing links.” This name stems from the idea that all life is connected in a kind of chain. You can trace it forwards, to see where life is heading, or backwards, to meet our predecessors and see where we’ve been. Three Pieces of Evidence That Prove Evolution is a Fact. For over 150 years—since the time of Charles Darwin—the Theory of Evolution has been through more scrutiny and rigorous investigation than just about any other scientific claim. 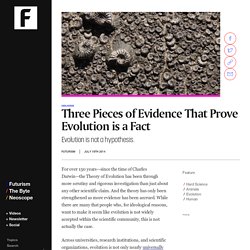 And the theory has only been strengthened as more evidence has been accrued. While there are many that people who, for ideological reasons, want to make it seem like evolution is not widely accepted within the scientific community, this is not actually the case. Across universities, research institutions, and scientific organizations, evolution is not only nearly universally accepted, it is also the basis upon which active, exciting, and important research is being done. Indeed, the scientific fact that is evolution is the basis of most of biology.

Biology - The study of the origin of life. Spontaneous generation If a species can develop only from a preexisting species, then how did life originate? Among the many philosophical and religious ideas advanced to answer that question, one of the most popular was the theory of spontaneous generation, according to which, as already mentioned, living organisms could originate from nonliving matter. With the increasing tempo of discovery during the 17th and 18th centuries, however, investigators began to examine more critically the Greek belief that flies and other small animals arose from the mud at the bottom of streams and ponds by spontaneous generation. Then, when Harvey announced his biological dictum ex ovo omnia (“everything comes from the egg”), it appeared that he had solved the problem, at least insofar as it pertained to flowering plants and the higher animals, all of which develop from an egg. Geochemistry. Definition, History, & Topics.

Physical science, the systematic study of the inorganic world, as distinct from the study of the organic world, which is the province of biological science. Physical science is ordinarily thought of as consisting of four broad areas: astronomy, physics, chemistry, and the Earth sciences. Each of these is in turn divided into fields and subfields. This article discusses the historical development—with due attention to the scope, principal concerns, and methods—of the first three of these areas. The Earth sciences are discussed in a separate article. Top Questions What is physical science? Phys.org - life. Life on Earth: Life (cf. biota) is a characteristic that distinguishes objects that have self-sustaining biological processes ("alive," "living"), from those which do not —either because such functions have ceased (death), or else because they lack such functions and are classified as "inanimate.

" In biology, the science that studies living organisms, "life" is the condition which distinguishes active organisms from inorganic matter, including the capacity for growth, functional activity and the continual change preceding death. A diverse array of living organisms (life forms) can be found in the biosphere on Earth, and properties common to these organisms—plants, animals, fungi, protists, archaea, and bacteria — are a carbon- and water-based cellular form with complex organization and heritable genetic information.

Cyanide compounds discovered in meteorites may hold clues to the origin of life. Cyanide and carbon monoxide are both deadly poisons to humans, but compounds containing iron, cyanide, and carbon monoxide discovered in carbon-rich meteorites by a team of scientists at Boise State University and NASA may have helped power life on early Earth. The extraterrestrial compounds found in meteorites resemble the active site of hydrogenases, which are enzymes that provide energy to bacteria and archaea by breaking down hydrogen gas (H2). Their results suggest that these compounds were also present on early Earth, before life began, during a period of time when Earth was constantly bombarded by meteorites and the atmosphere was likely more hydrogen-rich.

Where did we come from? - Science Documentary with Neil DeGrasse Tyson. Massive genetic study shows how humans are evolving. Origin of Life - How Life Started on Earth. Abiogenesis. Abiogenesis is the process by which life arises naturally from non-living matter. Scientists speculate that life may have arisen as a result of random chemical processes happening to produce self-replicating molecules.

One of the popular current hypotheses involves chemical reactivity around hydrothermal vents.[1][2] This hypothesis has yet to be empirically proven although the current evidence is generally supportive of it. History: spontaneous generation[edit] Before recent centuries, it was widely believed that abiogenesis happens all around us, that many individual present-day organisms had originated from nonliving matter. Palaeontology Archives.

Refuting the Irrefutable Proof of God - part X. How Geology Disproves Noah's Flood. How Anthropology Disproves Noah's Flood. How Zoology Disproves Noahs Flood. Ken Miller on Human Evolution. DNA: Comparing Humans and Chimps. Martin Hanczyc: The line between life and not-life. What is the Evidence for Evolution? Modern Genetics Confirms Evolution. Ape-like face of early human ancestor revealed. The ape-like face of one of our earliest known ancestors has been revealed for the first time, thanks to the discovery of a nearly complete skull in Ethiopia. The cranium – the skull minus its lower jaw – belongs to Australopithecus anamensis, and its owner lived in the Afar basin in Ethiopia around 3.8 million years ago.

Australopiths are thought to be the direct ancestors of the early members of our own genus, Homo, which arose with Homo habilis roughly 2.4 million years ago. Several Australopith species have been identified. Scientists Watched a New Bird Species Evolve on Galapagos in Just 2 Generations. Introduction to Human Evolution. Understanding evolutionary relationships. The emergence of humans. Lines of evidence: The science of evolution. The origin of tetrapods. Evolution Lesson: Comparison of Human and Chimp. Chromosomes. 1. Image Gallery: Our Closest Human Ancestor. Chimpanzee–human last common ancestor. Chimpanzee–human last common ancestor. Study: Last Common Ancestor of Humans and Apes Looked Like Gorilla or Chimpanzee.