The problem with modern politics, summarised. Deepika Bhardwaj: The woman who fights for men's rights. In India, where crimes against women are rampant, a female activist and documentary filmmaker stands out for being a rare voice for abused men. 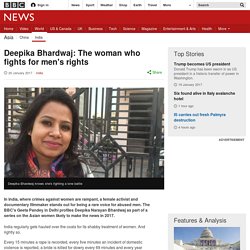 The BBC's Geeta Pandey in Delhi profiles Deepika Narayan Bhardwaj as part of a series on the Asian women likely to make the news in 2017. India regularly gets hauled over the coals for its shabby treatment of women. And rightly so. The weirdest people in the world? Crossref Citations This article has been cited by the following publications. 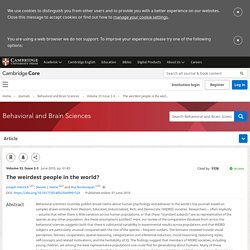 This list is generated based on data provided by CrossRef. Andrews, Kristin 2017. Chimpanzee mind reading: Don't stop believing. Future - How East and West think in profoundly different ways. As Horace Capron first travelled through Hokkaido in 1871, he searched for a sign of human life among the vast prairies, wooded glades and threatening black mountains. 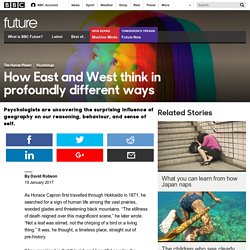 “The stillness of death reigned over this magnificent scene,” he later wrote. “Not a leaf was stirred, not the chirping of a bird or a living thing.” It was, he thought, a timeless place, straight out of pre-history. “How amazing it is that this rich and beautiful country, the property of one of the oldest and most densely populated nations of the world… should have remained so long unoccupied and almost as unknown as the African deserts,” he added. This was Japan’s frontier – its own version of the American ‘Wild West’. "The Scourge of the Left": Too Much Stigma, Not Enough Persuasion - The Atlantic. The coalition that opposes Donald Trump needs to get better at persuading fellow citizens and winning converts, rather than leaning so heavily on stigmatizing those who disagree with them. 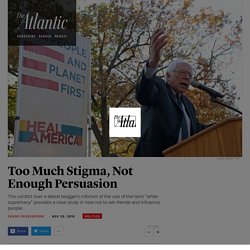 Chief among the problems with stigma as a political weapon? It doesn’t work. So I declared after election day. And today, to start exploring the subject more deeply, I offer a case study of stigma wielded both needlessly and counterproductively. The backdrop is the intra-left debate about “identity politics.” How Often Do Women Rape Men? - The Atlantic. Male rape in America: A new study reveals that men are sexually assaulted almost as often as women. Photo by Thomas Northcut/Thinkstock Last year the National Crime Victimization Survey turned up a remarkable statistic.

In asking 40,000 households about rape and sexual violence, the survey uncovered that 38 percent of incidents were against men. The number seemed so high that it prompted researcher Lara Stemple to call the Bureau of Justice Statistics to see if it maybe it had made a mistake, or changed its terminology. An interesting read. I Spent 5 Years With Some of Trump's Biggest Fans. Here's What They Won't Tell You. In a framed photo of herself taken in 2007, Sharon Galicia stands, fresh-faced and beaming, beside first lady Laura Bush at a Washington, DC, luncheon, thrilled to be honored as an outstanding GOP volunteer. 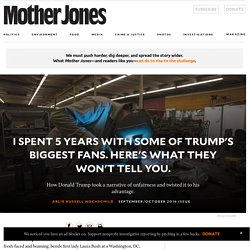 We are in her office in the Aflac insurance company in Lake Charles, Louisiana, and Sharon is heading out to pitch medical and life insurance to workers in a bleak corridor of industrial plants servicing the rigs in the Gulf of Mexico and petrochemical plants that make the plastic feedstock for everything from car seats to bubble gum. After a 20-minute drive along flat terrain, we pull into a dirt parking lot beside a red truck with a decal of the Statue of Liberty, her raised arm holding an M-16.

A man waves from the entrance to an enormous warehouse. Warm, attractive, well-spoken, Sharon has sold a lot of insurance policies around here and made friends along the way. Sharon Galicia sells accident insurance to Louisiana laborers. We need a 'PC' that includes white people (Opinion) The simple fact is that a core constituency of white people just aren't going to "get it" the way the left wants them to. 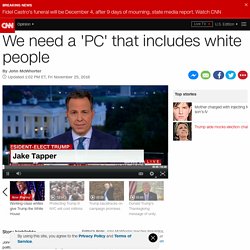 This is the case, for example, on race. The left wants white America to see itself as profoundly culpable, as the bad guy in the drama. For many black people, for instance, the very definition of black identity is enduring racist dismissal from whites. To claim that any other particular trait is "black" is considered stereotyping, as we are to see black people as endlessly diverse. The surprising origins of 'post-truth' – and how it was spawned by the liberal left.

“Post-truth” has been announced as the Oxford Dictionaries’ international word of the year. 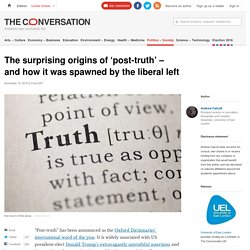 It is widely associated with US president-elect Donald Trump’s extravagantly untruthful assertions and the working-class people who voted for him nonetheless. But responsibility for the “post-truth” era lies with the middle-class professionals who prepared the runway for its recent take-off. Those responsible include academics, journalists, “creatives” and financial traders; even the centre-left politicians who have now been hit hard by the rise of the anti-factual. On November 16, 2016 Oxford Dictionaries announced that “post-truth” had been selected as the word which, more than any other, reflects “the passing year in language”. It defines “post-truth” as “relating to or denoting circumstances in which objective facts are less influential in shaping public opinion than appeals to emotion and personal belief”. Forget Brexit and Trump, “post-truth” was spawned by the liberal left long ago. Outraged by the election? It could be because you moralize rationality.

People tend to get highly emotional about issues they regard as matters of morality, and they generally attempt to avoid or even punish individuals they regard as immoral. 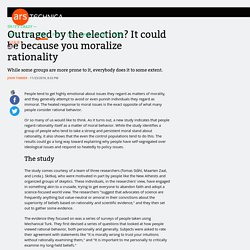 The heated response to moral issues is the exact opposite of what many people consider rational behavior. Or so many of us would like to think. As it turns out, a new study indicates that people regard rationality itself as a matter of moral behavior. While the study identifies a group of people who tend to take a strong and persistent moral stand about rationality, it also shows that the even the control populations tend to do this. Professor against political correctness: Part I: Fear and the Law.

Oct 3/16: Part 2: Compulsory Political Education: A Real World Case Study at the U of Toronto. 3a: Tactics: Announcing! Pokemon PC! U Toronto Requests my Silence. My response. How Post-Watergate Liberals Killed Their Populist Soul. It was January 1975, and the Watergate Babies had arrived in Washington looking for blood. 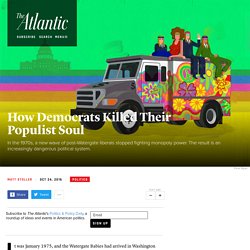 The Watergate Babies—as the recently elected Democratic congressmen were known—were young, idealistic liberals who had been swept into office on a promise to clean up government, end the war in Vietnam, and rid the nation’s capital of the kind of corruption and dirty politics the Nixon White House had wrought. Richard Nixon himself had resigned just a few months earlier in August.

But the Watergate Babies didn’t just campaign against Nixon; they took on the Democratic establishment, too. Best Books About American Politics - The Atlantic. No matter who wins the U.S. presidential election on November 8, America’s got some grappling to do. This race has been full of sexism, racism, anti-Semitism, Islamophobia, and general bigotry.

Many voters are unenthusiastic about Donald Trump and Hillary Clinton, and the two candidates are widely rated as dishonest and untrustworthy in polls. Meanwhile, police shootings have rocked cities across the country. Muslims have been attacked by hate groups. Long-standing political coalitions have devolved into in-fighting. Where microaggressions really come from: A sociological account. I just read the most extraordinary paper by two sociologists — Bradley Campbell and Jason Manning — explaining why concerns about microaggressions have erupted on many American college campuses in just the past few years. In brief: We’re beginning a second transition of moral cultures. The first major transition happened in the 18th and 19th centuries when most Western societies moved away from cultures of honor (where people must earn honor and must therefore avenge insults on their own) to cultures of dignity in which people are assumed to have dignity and don’t need to earn it.

They foreswear violence, turn to courts or administrative bodies to respond to major transgressions, and for minor transgressions they either ignore them or attempt to resolve them by social means. The cult of ignorance in the United States: Anti-intellectualism and the "dumbing down" of America. © reddit.com There is a growing and disturbing trend of anti-intellectual elitism in American culture. It's the dismissal of science, the arts, and humanities and their replacement by entertainment, self-righteousness, ignorance, and deliberate gullibility. Strangers in Their Own Land: Anger and Mourning on the American Right: Arlie Russell Hochschild: 9781620972250: Amazon.com: Books.

Microaggressions and the Rise of Victimhood Culture. Low IQ & Conservative Beliefs Linked to Prejudice. There's no gentle way to put it: People who give in to racism and prejudice may simply be dumb, according to a new study that is bound to stir public controversy. The research finds that children with low intelligence are more likely to hold prejudiced attitudes as adults. These findings point to a vicious cycle, according to lead researcher Gordon Hodson, a psychologist at Brock University in Ontario. Low-intelligence adults tend to gravitate toward socially conservative ideologies, the study found. Those ideologies, in turn, stress hierarchy and resistance to change, attitudes that can contribute to prejudice, Hodson wrote in an email to LiveScience.

Something strange is happening at America’s colleges and universities. A movement is arising, undirected and driven largely by students, to scrub campuses clean of words, ideas, and subjects that might cause discomfort or give offense. Last December, Jeannie Suk wrote in an online article for The New Yorker about law students asking her fellow professors at Harvard not to teach rape law—or, in one case, even use the word violate (as in “that violates the law”) lest it cause students distress. Honor, Dignity, and Victimhood: A Tour Through Three Centuries of American Political Culture. Awareness vs. Action: Two Modes of Protest in American History.