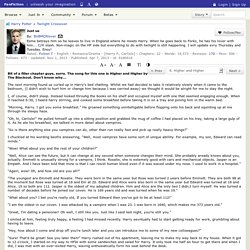 The song for this one is Higher and Higher by The Blackout. Don't know why... The next morning found us curled up in Harry's bed chatting. Whilst we had decided to take it relatively slowly when it came to the bedroom, (I didn't wish to hurt him or change him because I was carried away) we thought it would be alright for me to stay the night. I, of course, didn't sleep. "Morning, Harry. "Oh, hi, Carlisle! " "So is there anything else you vampires can do, other than run really fast and pick up really heavy things? " I chuckled at his wording beofre answering, "Well, most vampires have some sort of unique ablility.

"Wow! "Well, Alice can see the future, but it can change at any second when someone changes their mind. "Again, wow! "The youngest are Emmett and Rosalie. "What about you? Just us Chapter 2: Meeting, a Harry Potter + Twilight Crossover fanfic. So, chapter 2. i'm so happy that I got so many follows, favourites and reviews. 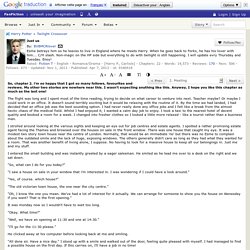 My other two stories are nowhere near this. My Eveything - Hariana - Harry Potter - J. K. Rowling, Twilight Series - Stephenie Meyer [Archive of Our Own] Charlie's Hot Date Chapter 12, a Harry Potter + Twilight Crossover fanfic. Jasper was slowly walking across his room amazed at how Rosalie, Sue and Harry decorated his room. 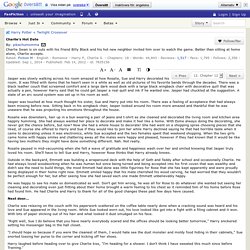 It was filled with items that he hasn't seen in a while as well as old pictures of his favorite bands through the decades. There was a black leather couch that screamed comfort and a large dark wood desk with a large black wingback chair with decorative quill that was actually a pen, however Harry said that he could get Jasper a real quill and ink if he wanted one. Jasper had chuckled at the suggestion. A state of an arc sound system was set up in his room as well. Jasper was touched at how much thought his sister, Sue and Harry put into his room. Rosalie was downstairs, hair up in a bun wearing a pair of jeans and t-shirt as she cleaned and decorated the living room and kitchen area happily humming.

Rosalie paused in mid-vacuuming when she felt a wave of gratitude and happiness wash over her and smiled knowing that Jasper truly loved his room. Next door… "What do you mean? " Life After Death And Betrayal Chapter 24, a Harry Potter + Twilight Crossover fanfic. Life After Death And Betrayal Chapter 24 In advance I apologize if the information isn't accurate, I cannot find a list on all shows erm rides I suppose you call them on google when I tried doing that. 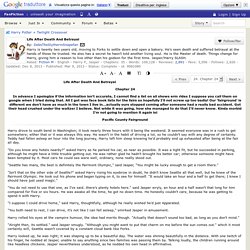 All I got was face book lists for the fairs so hopefully I'll not screw up too badly! Our 'fairground' is different we don't have as much in the town I live in…actually ours stopped coming after someone had a really bad accident. Got their head crushed under the waltzer I believe. Pacific County Fairground Harry drove to south bend in Washington; it took nearly three hours with it being the weekend. "Do you know any hotels nearby? " The Cherished Child - beth9891 - Twilight Series - Stephenie Meyer, Harry Potter - J. K. Rowling. Stamina - orphan_account - Harry Potter - J. K. Rowling, Twilight Series - Stephenie Meyer [Archive of Our Own] 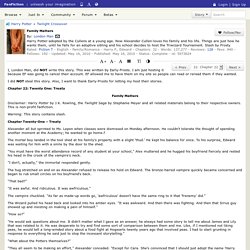 This was written by Early-Frosts. I am just hosting it because EF was going to cancel their account. EF allowed me to have them on my site so people can read or reread them if they wanted. I did NOT steal this story. Also, I want to thank Early-Frosts for letting my host their stories. Chapter 22: Twenty One: Treaty Family Matters. Nothing Left To Hold , a Harry Potter + Twilight Crossover fanfic. Titre original : Nothing Left to Hold. 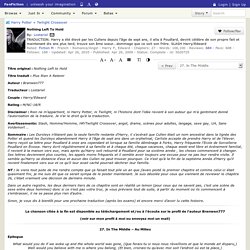 Dreamt Chapter 7, a Harry Potter + Twilight Crossover fanfic. Jasper stared out the window of his room with one of the most painful loos he ever had. 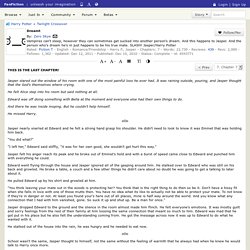 It was raining outside, pouring, and Jasper thought that the God's themselves where crying. He felt Alice step into his room but said nothing at all. Edward was off doing something with Bella at the moment and everyone else had their own things to do. And there he was inside moping. But he couldn't help himself. Eternity Chapter 7: Eternity, a Harry Potter + Twilight Crossover fanfic. A/N: IT IS FINALLY FINISHED! 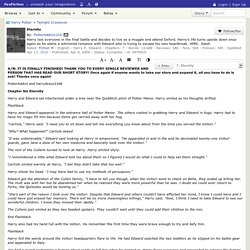 THANK YOU TO EVERY SINGLE REVIEWER AND PERSON THAT HAS READ OUR SHORT STORY! Once again if anyone wants to take our story and expand it, all you have to do is ask! Thanks once again! PotterAddict and harrydraco2168 Chapter Six Eternity Harry and Edward sat intertwined under a tree near the Quidditch pitch of Potter Manor. Flashback Harry and Edward appeared in the entrance hall of Potter Manor. Shattered Souls - misteeirene - Harry Potter - Fandom, Twilight [Archive of Our Own] In Sickness and in Health Chapter 1, a Harry Potter + Twilight Crossover fanfic.

I do not own Harry Potter or Twilight, Yes, another new fic.. 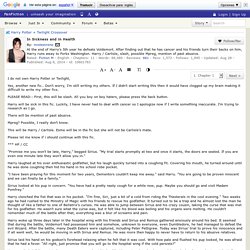 Don't worry, I'm still writing my others. If I didn't start writing this then it would have clogged up my brain making it difficult to write my other fics. PLEASE READ:: First, this will be slash. All you boy on boy haters, please press the back button. Harry will be sick in this fic. There will be mention of past abusive. Mpreg? Ouroboros - ChelseaSmilesNoMore - Twilight Series - All Media Types, Harry Potter - J. K. Rowling [Archive of Our Own] Darkest Night Chapter 1, a Harry Potter + Twilight Crossover fanfic. Darkest Night Chapter 1 The final battle was exactly that, the finale battle. 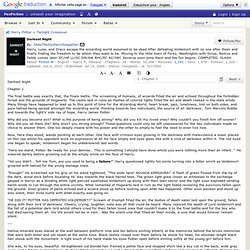 The screaming of humans, of wizards filled the air and echoed throughout the forbidden forest and the grounds of Hogwarts. The castle laid in ruins as flashes of colored lights filled the air and death reeked in the stale winds. Many things have happened to lead up to this point of time for the Wizarding World, heart break, pain, loneliness, lost on both sides, and pure hatred being spread amongst the wizarding world. Why did you become evil? Now, here they stood, wands pointing at each other.

"Here we stand, Potter. "Yet you didn't… Tell me Tom, are you used to being a failure? " Silent Light Chapter 1, a Harry Potter + Twilight Crossover fanfic. Before anyone kicks off I've adopted this story not stolen it! I'm thankful she trusted me with her story so I can continue it and give it the ending it deserves (Not that her ending would have been bad) Perhaps someone should give me an extra shovel :P I'm currently digging my own grave. You might notice things slightly different, such as the age Harry is turned into a vampire ok?

Its ninteen now not eighteen apart from that nothing much else will get changed! Previous writer - Dark K Sly New writer - Debstheslytherinsnapefan Silent Light. Gives You Hell Chapter 1: Prologue, a Harry Potter + Twilight Crossover fanfic. Gives You Hell By: azzie adams AN (Try and read these. Some of them are important.