Coming Home, a naruto fanfic. A/N: Okaaay… this is my first attempt at a KakaSaku. 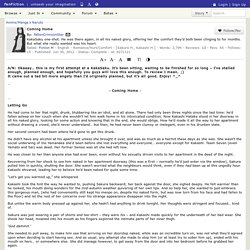 It's been sitting, waiting to be finished for so long – I've stalled enough, planned enough, and hopefully you guys will love this enough. To review I mean. ;)It came out a tad bit more angsty than I'd originally planned, but it's all good. Enjoy! ^_^ – Coming Home – Letting Go He had come to her that night, drunk, blubbering like an idiot, and all alone. Her second concern had been where he'd gone to get this drunk. He didn't have any alcohol at his apartment unless she brought it over, and was as much as a hermit these days as she was. He was closer to her than anyone else had ever been, even without his sexually driven visits to her apartment in the dead of the night.

Recovering from her shock to see him naked in her apartment doorway (this was a first – normally he'd just enter via the window), Sakura pulled him in quickly, shutting the door. "Let's get you warmed up," she whispered. Archiveofourown. Reason Chapter 1: Arrival, a naruto fanfic. Chapter 1: Arrival Haruno Sakura sighed and tucked a fallen strand of pink hair back behind her ear as she gave one final look over the empty room. 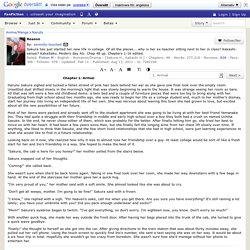 Unsettled dust drifted slowly in the morning's light that was slowly beginning to warm the house. It was strange seeing her room so bare. All that was left were a few old childhood items: a twin bed and a couple of furniture pieces that were too big to bring along with her. Graduating from high school about two months ago, she was ready to begin her life as a college student and, much to her mother's dismay, start her journey into living an independent life of her own. Most of her items were packed and already sent off to the student apartment she was going to be living at with her best friend Yamanaka Ino.

Looking back on it now, she realized how silly it was to almost lose her friendship over a guy. "Sakura, the cab is here for you honey! " Sakura snapped out of her thoughts. "Coming! " The Silver Son Chapter 1, a naruto fanfic. Hi and welcome to my new story, The Silver Son. 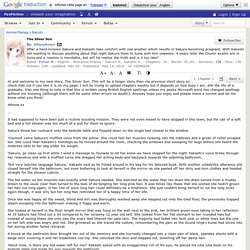 This will be a longer story than my previous short story so check that out if you like it is on my page! I will be trying to upload chapters weekly but it depends on how busy I am, ahh the life of a graduate. Also one thing to note is that this is written using British English spellings unless my pesky Microsoft word has changed spellings without me knowing (although there will be some other errors no doubt!).

Anyway hope you enjoy and please leave a review and let me know what you think! Athena xx It had supposed to have been just a routine scouting mission. Sakura threw her rucksack onto the bedside table and flopped down on the single bed closest to the window. 'Claimed' came Sakura's muffled voice from the pillow. 'Not very ladylike language Sakura,' Kakashi said as he fished around in his bag for his beloved book. The hot water on her muscles was exactly what Sakura needed. 'About time, is there any hot water left for me?

' Unbroken Chapter 1, a naruto fanfic. When Sakura finds herself facing a rogue ninja, she never dreamed that she would end up fourteen years in the past. 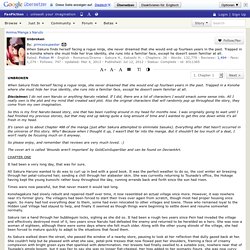 Trapped in a Konoha where she must hide her true identity, she runs into a familiar face, except he doesn't seem familiar at all. Disclaimer; I do not own Naruto or anything Naruto related. If I did, there are a lot of characters I would smack some sense into. All I really own is the plot and my mind that created said plot. Also the original characters that will randomly pop up throughout the story, they come from my own imagination. So this is my first Naruto-based story, one that has been rustling around in my head for months now. It's canon up to about Chapter 488 of the manga (just after Sakura attempted to eliminate Sasuke). So please enjoy, and remember that reviews are very much loved. :) The cover art is called 'Wounds aren't important' by GoldCoinSuperStar and can be found on DeviantArt. It had been a very long day, that was for sure. "Daydreaming, are we? " Shinobi of the Sand - Goldfishlover73 - Naruto [Archive of Our Own]