You're Mine, Sirius, And I Will Never Let You Go!, a harry potter fanfic. Summary: What would've happened if Rodolphus had fought for Sirius… Sequel to 'I Want You, Sirius, And No One Else! 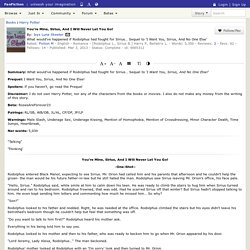 ' Prequel: I Want You, Sirius, And No One Else! Spoilers: if you haven't, go read the Prequel. Betrayal's Touch Chapter 26: Planned Chaos, a harry potter fanfic. Disclaimer: I do not own Harry Potter. 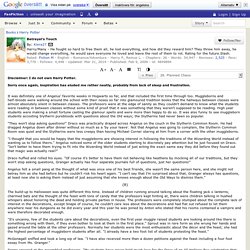 Sorry once again, inspiration has eluded me rather neatly, probably from lack of sleep and frustration. It was definitely one of Angelus' favorite weeks in Hogwarts so far, and that included the first time through too. Muggleborns and half-bloods were walking around the school with their noses so far into glamoured tradition books that the hallways between classes were almost absolutely silent in between classes. The professors were at the edge of sanity as they couldn't demand to know what the students were reading in between classes without some kind of proof that it was something that they weren't supposed to be reading. 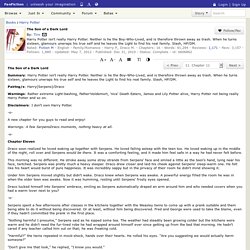 Neither is he the Boy-Who-Lived, and is therefore thrown away as trash. When he turns sixteen, glamours unwraps his true self and he leaves the Light to find his real family. Slash, HP/DM. Black Phoenix Chapter 2 Diagon Alley, a harry potter fanfic. Summary: Betrayed and killed by the one they considered their best friend, Harry and Hermione made a different decision when they found themselves at King's Cross station. 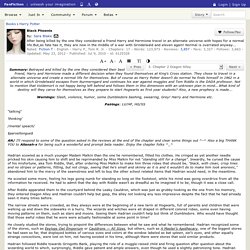 They chose to travel in a alternate universe and create a normal life for themselves. But of course as Harry Potter doesn't do normal he finds himself in 1962 in a world in which Grindelwald escapes from Nurmerngard and continues his war against muggles and Tom Riddle is the DADA professor. Not to mention that Voldemort is not happy being left behind and follows them in this dimension with an unknown plan in mind...What kind of destiny will they carve for themselves as they prepare to start Hogwarts as first year students? The Other Malfoy Chapter 7, a harry potter fanfic. Chapter Seven: Back to School, Baby! 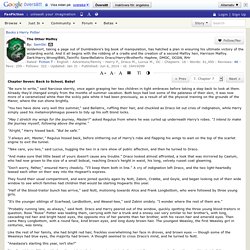 "Be sure to write," said Narcissa sternly, once again grasping her two children in tight embraces before taking a step back to look at them. Already they'd changed simply from the months of summer vacation. Both boys had lost some of the paleness of their skin, it was now more of a caramelized white than the sickly pale white it had been previously, as a result of all the physical training on the grounds of the Manor, where the sun shone brightly. "You two have done very well this summer," said Bellatrix, ruffling their hair, and chuckled as Draco let out cries of indignation, while Harry simply used his metamorphmagus powers to tidy up his soft blond locks. 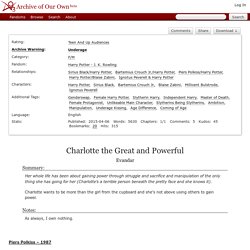 Miss Briggs had decided that their class’ play for the end of year was going to be Snow White and the Seven Dwarves, and she’d decided that Charlotte was to play the part of Snow White. Charlotte had been excited for all of five minutes, hearing that, before realising that Dudley would tell and she wouldn’t be allowed and that there was no point in being excited about anything. Dudley has told, and he’s sitting on Aunt Petunia’s other side, sucking smugly on a lolly, while Aunt Petunia hisses about rewarding bad behaviour. Charlotte sneaks a look up at Miss Briggs.

“Mrs Dursley,” Miss Briggs says, “I understand your concerns, but really, Charlotte is perfect for the role.” Aunt Petunia sniffs. She strides out of the classroom, towing Dudley behind her, and Charlotte scrambles up out of her chair to follow. So, they haven’t rehearsed it. Charlotte smiles. Archive of Our Own. Thousands Of Reasons To Smile Chapter 1, a harry potter fanfic. Summary: A Time Travel Story; Harry goes back in time as his eleven year old self and ends up in a orphanage with Tom Riddle at age eleven whom is going to start Hogwarts, can Harry change history? 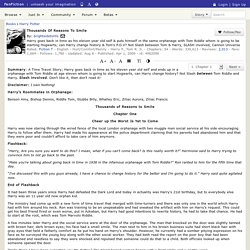 Not Slash between Tom Riddle and Harry. Slash involved. The Brightest Star Chapter 1: Prologue, a harry potter fanfic. I do not own Harry Potter, and I do not make any money from this story. 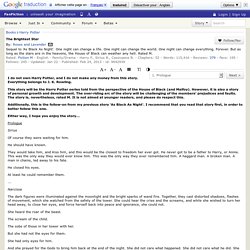 Everything belongs to J. K. Rowling. Harry Potter and the Methods of Rationality Chapter 1: A Day of Very Low Probability, a harry potter fanfic. Disclaimer: J. 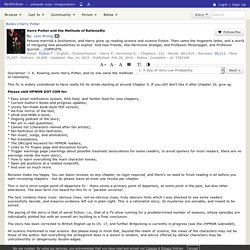 K. Rowling owns Harry Potter, and no one owns the methods of rationality. This fic is widely considered to have really hit its stride starting at around Chapter 5. Harry Potter and the Dark's Rise Chapter 1: Prologue, a harry potter fanfic. This is a new type of story for me, I've read a lot of Dark Harry Stories, and I've found them to be excellent, so this is my attempt. 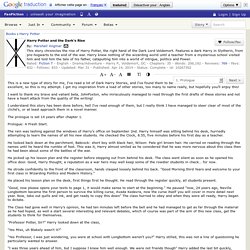 I got my inspiration from a load of other stories, too many to name really, but hopefully you'll enjoy this! I want to thank my brave and valiant beta, JohnFoxton, who miraculously managed to read through the first drafts of these stories and not have a heart attack from the quality of the writing! I understand this story has been done before, hell I've read enough of them, but I really think I have managed to steer clear of most of the cliché's, or at least approach them in a novel manner. The prologue is set 14 years after chapter 1. Black Fortunes Chapter 1, a harry potter fanfic.

Title: Black FortunesGenre: Drama/Family/Romance/Time-Travel/SLASHPairing: Orion Black/Harry PotterSummary: Harry breaks the copy of Sirius' mirror after the horrific end of the war. He is sent back to 1975 and takes up the mantle of Lord Peverell. He hopes to turn around the tragic Black family story. How? By getting newly widowed Lord Orion Black to fall in love with him. SLASH, Mpreg, Time-Travel, mild Character Bashing.Disclaimer: I don't own Harry Potter. Name Confused - enchanted_nightingale - Sherlock (TV), Harry Potter - J. K. Rowling [Archive of Our Own] Old Souls Chapter 48: Birdie, a harry potter fanfic. A/N A small In-between chapter. Not a real chapter, just something short I wrote in between studying when I needed a break.

It's nothing too serious and has no plot. A real, more serious chapter follows it. But after my finals in two weeks. I just didn't want to make you guys wait so much to hear from me. Again and Again Chapter 1, a harry potter fanfic. AN: I really like this one. I've bounced back onto it a few times over the last 5 months, and bounced off of it several times. I would really really like to keep going on it, at some point.

I'm not sure if I can though – so here's your warning: I may never finish this story. It may end up as just one more abandoned story that my muse left me on. Time to Put Your Galleons Where Your Mouth Is , a harry potter fanfic. Time to Put Your Galleons Where Your Mouth Is x The Sort of Prequel/SequelPut my Galleons on That One "An alternate dimension? " Harry raised a brow, arms folded across his chest as he offered Death a half-hearted glare. Life had passed by and Harry Potter had found himself back in the white walls of Kings Cross station after his death. Enochian Prophecies Chapter 14, a harry potter fanfic. Notice: This chapter contains sexual content. Due to FFN's rules I have created a livejournal account where you can read just the mature content.

If you don't want to read it don't worry, there won't be anything vital to the story in the missing scene. If you do, just go onto my profile and click on the link there. I have marked the part with the sign {Explicit Content} in the story so you know when to switch over. As always, thanks for the reviews and I hope you enjoy! Riddled Chapter 1: The Diary of TM Riddle, a harry potter fanfic. Riddled By Killing Curse Eyes. Death of Today Part I Chapter 1, a harry potter fanfic. Put my Galleons on That One Chapter 2: Getting Sorted, a harry potter fanfic. Put my Galleons on That One. Everything I do Chapter 1: As the Seventh Month Dies, a Harry Potter + Avengers Crossover fanfic. Author's Notes: I have been bitten by the Cross-Over bug.

I've had this idea since I began plotting for Blood of the Father and it won't leave me alone anymore. Because this will be taking place mostly in the Marvel Movie Universe I needed to adjust the Harry Potter timelines a little bit.