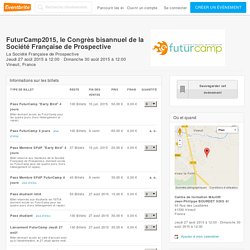 Digital transformation: the key points and some bottom lines by keynote speaker Gerd Leonhard. Me and my colleagues at The Futures Agency are getting a lot of speaking requests on the Digital Transformation topic (or should I say ‘meme’) so I figured it would be good to share some of the key points here. 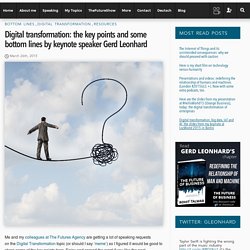 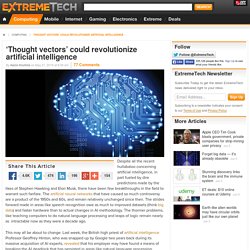 The artificial neural networks that have caused so much controversy are a product of the 1950s and 60s, and remain relatively unchanged since then. The strides forward made in areas like speech recognition owe as much to improved datasets (think big data) and faster hardware than to actual changes in AI methodology. The thornier problems, like teaching computers to do natural language processing and leaps of logic remain nearly as intractable now as they were a decade ago. 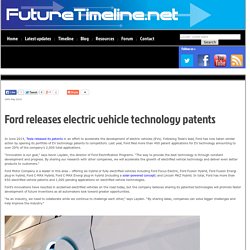 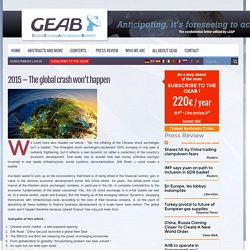 The Shanghai stock exchange’s exuberant 100% increase in one year is certainly frightening, but it reflects a real dynamic (or rather a correction) of the country’s economic development. One really has to wonder how real money (Chinese savings) invested in real needs (infrastructure, social systems, decontamination, Silk Road…) could create a bubble. Our team wants to pick up on the inconsistency that there is of being afraid of the financial centres’ gain in value in the obvious economic development zones like China whilst, for years, the whole world must marvel at the Western stock exchanges’ numbers, in particular in the US, in complete contradiction to the economic fundamentals of the areas concerned. Yes, the US stock exchange is in a full bubble (as well as, to a lesser extent, Japan and Europe).

Robots. 12 Laws of the Future. 12 Laws of the Future For several decades now I have been contemplating our relationship with the future. Many of my colleagues think of me as that crazy guy who assigns human attributes to this thing we call the future. On occasion you can hear me uttering phrases like, “I know it’s going to be a great day because the future is clearly happy with me today.” Or, “no, that’s not a good idea because the future is probably going to push it off a cliff.”

At one point I even tried to convince my wife that the future wanted me to buy a new car, but she wasn’t buying it. So why is it so important to study the future? The Physics of Time Vs the Physics of the Future “As physicists, we believe the separation between past, present, and future is only an illusion, although a convincing one.” – Albert Einstein From everything I’ve studied, past observers have focused on the concept of the future as being a consequence of time, rather than a stand-alone force of nature.

Futures. Space & Future... Future news & vision. Singularity-Emergence A.I. What Will the World Be Like in 2112? Daron Acemoglu What will life be like in 100 years? 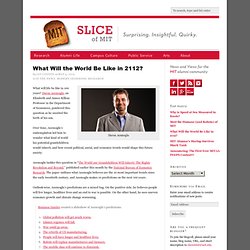 Daron Acemoglu, an Elizabeth and James Killian Professor in the Department of Economics, pondered this question as he awaited the birth of his son. Over time, Acemoglu’s contemplation led him to wonder what kind of world his potential grandchildren would inherit, and how recent political, social, and economic trends would shape this future society. Acemoglu tackles this question in “The World our Grandchildren Will Inherit: The Rights Revolution and Beyond,” published earlier this month by the National Bureau of Economic Research. The paper outlines what Acemoglu believes are the 10 most important trends since the early twentieth century, and Acemoglu makes 10 predictions on the next 100 years. 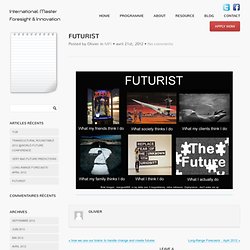 This will be a marvellous opportunity for our existing innovators and future leaders to acquire an understanding of futures thinking that will eventually contribute to our society. We look forward to hearing more. Yvonne CURTIS (New Zealand Futures Trust) This program contains many new and innovative aspects and is certain to attract a wide range of talented people who are seeking to understand and deal with our dynamically evolving world.