La Grelinette - Vente Graines potagères & Graines de fleurs, Grelinettes. Hand Seeder,Seeding Machine - Buy Seeding Machine,Seeder,Agricultural Machine Product on Alibaba. It is tool of seeding it as for the seed of the vegetable and the flower.The seed falls by one when grasping by the hand. 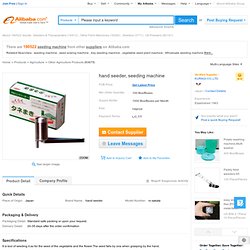 One seed can be dropped to the raising box and it is convenient. It is recommended in the kitchen gardener. It is a bottle part where the seed is put. Revista Brasileira de Engenharia Agrícola e Ambiental - Evaluation of manual planters. Fitarelli. EVALUATION, IMPROVEMENT AND DEMONSTRATION OF A MANUAL SOYBEAN SEEDER - Chapter 3. 9.1 Development of a Seeder for Planting in Tilled Sail Field tests of the seeder with a round soil opener and a rectangular soil opener showed satisfactory dry season soybeans planting in wet no-tilled soil.

A labour was required to cover the seed in tilled soil, therefore a special hole covering assembly was designed and attached to the round soil opener (Fig. 9.1). The U-shaped hole covering assembly was made from mild steel plate 40 mm. wide and 4 mm. thick. The steel plate was sharpened on the side in contact with the soil surface while covering the seed hole. The seed covering assembly was heat-treated for hardening and was attached to the stands of the round soil opener seeder with a pair of bolts and cotter pins to allow it to swing. EVALUATION, IMPROVEMENT AND DEMONSTRATION OF A MANUAL SOYBEAN SEEDER - Chapter 4. With the cooperation and assistance of the several Thai Government and International Agencies, field demonstrations, training courses and workshops were conducted. 13.1 Demonstrations and Exhibitions 1) Exhibition of the seeder during "The National Agricultural Fair, 1986", Chiang Mai University, Chiang Mai province during 7-11 February 1986. 2) Demonstration of the seeder to farmers and project officers of the Royal Pikul Thong Land Development Project in Narathiwas province during 7-9 September 1986. 3) Exhibition, demonstration and selling of the seeders in the Northern Farm Machinery Fair in Chiang Rai province during 26-28 December 1986.

Resultados da pesquisa de no Google. EVALUATION, IMPROVEMENT AND DEMONSTRATION OF A MANUAL SOYBEAN SEEDER - Chapter 1. C) Obstruction of the Seed Passage by Foreign Material During field testing seeds jammed at the top of inner seed tube because foreign material blocked the seed. The metering roller was taken out several times to remove materials like rice-straw and plant stems blocking the seed tube. Drilling an opening in the seed tube under the metering roller helped to remove the foreign material faster. d) Effect of Seed Covering on Germination The average depth of holes made by the seeder was 3 to 4 cm. The performance of the AIT prototype II (Fig. 4.2) jab seeder was compared with the modified AIT seeder (seeder B) developed by a small workshop in Chiang Mai (Fig. 5.1).

Homegrown Goodness - Homemade DIY seeder planter. As a follow-up on how this has worked for me: In regards to planting onion sets, about 10% of the harvested onion greens came out crooked. 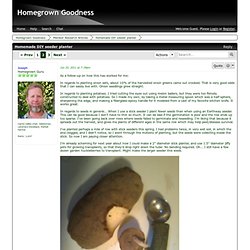 That is very good odds that I can easily live with. Onion seedlings grew straight. In regards to planting potatoes. I tried cutting the eyes out using melon ballers, but they were too flimsily constructed to deal with potatoes. In regards to seeds in general... I've planted perhaps a mile of row with stick seeders this spring. I'm already scheming for next year about how I could make a 2" diameter stick planter, and use 1.5" diameter jiffy pots for growing transplants, so that they'd drop right down the tube: No bending required. Société Africaine de Production Agricole Raisonnée et Responsable. GROUNDNUT MECHANIZATION - Chapter 1. Due to a relatively small groundnut planted area per household and a variety of crops gown in the existing systems, a Jab Planter (Figure 1), a Rolling Injection Planter (Figure 2), and an Inclined Plate Planter (Figure 3) were selected for modifications. These planters have been used successfully for planting soybean, mungbean, corn, and rice.

The modification of these planters so that they could be used for planting groundnut would make the planters able to plant almost all crops in the existing cropping systems. Arbo'Plants - Pépinière,travaux forestiers,plants en mottes,plants forestiers,haies,brout,plants en godet - Avantages - Tube de plantation. Agroforestry Single-Seed Planters Evaluation. Evaluation of Single-Seed Planters Gary Kees, Project Leader Brad Campbell, Project Assistant Single-seed planters allow tree seeds to be planted where they're most likely to thrive and at a depth that increases the likelihood of germination. 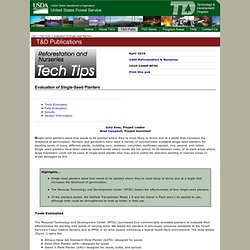 Farmers and gardeners have used a variety of commercially available single-seed planters for planting seeds of many different plants, including corn, soybean, cucumber, sunflower, squash, rice, peanut, and cotton. Single-seed planters have been used to replant areas where seeds did not sprout, to fill between rows, or to plant areas where large machinery could not be used. A single-seed planter also may prove useful for selective seeding in riparian zones or areas damaged by fire. Highlights... Tools Evaluated The Missoula Technology and Development Center (MTDC) purchased four commercially available planters to evaluate their effectiveness for planting tree seeds of varying sizes. Stand & Plant Seeder & Planter: plant seeds and plants while standing. No bending, stooping or squating to plant your garden.

A Homemade Seed Planter « ThinMan’s Blog. My Seed Planter I was able to cobble together a hand held seeder out of PVC pipe and a few other pieces of hardware. 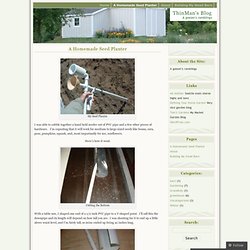 I’m expecting that it will work for medium to large-sized seeds like beans, corn, peas, pumpkins, squash, and, most importantly for me, sunflowers. Here’s how it went. Cutting the Bottom With a table saw, I shaped one end of a 1/2 inch PVC pipe to a V-shaped point. The small piece was part of the big pipe. Semoir au bout d'un manche.