Ferrotec NORD (former SCTB NORD), Specialized Constructive Technological Bureau NORD, was formed by a group of thermoelectricians in Moscow in 1991. Since its beginnings SCTB NORD has always been able to focus on the manufacture of hi-tech products thanks to its high scientific potential.

What are the things you must know about Thermoelectric Power Generators. Thermoelectric materials produce electricity while in a temperature gradient. 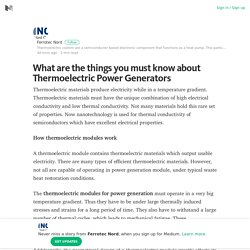 Thermoelectric materials must have the unique combination of high electrical conductivity and low thermal conductivity. Not many materials hold this rare set of properties. Peltier module installation. Installation of thermoelectric cooleres is a critical operation that determines operating capability and reliability of the device in general. 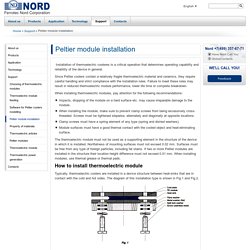 Since Peltier coolers contain a relatively fragile thermoelectric material and ceramics, they require careful handling and strict compliance with the installation rules. Failure to meet these rules may result in reduced thermoelectric module performance, lower life time or complete breakdown. Software for Peltier coolers modelling. To choose a Peltier module complying with the customer's requirements, advantage may be taken of the ТEC Calc software available on the website, that will have to be installed on your PC. 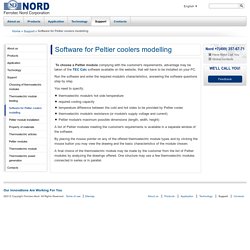 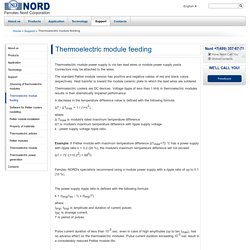 Connectors may be attached to the wires. The standard Peltier module version has positive and negative cables of red and black colors respectively. Heat transfer is toward the module ceramic plate to which the lead wires are soldered. Home. Ferrotec Nord Thermoelectric Modules. Thermoelectric Power Generation. Thermoelectric modules can be used to convert heat energy to electricity. 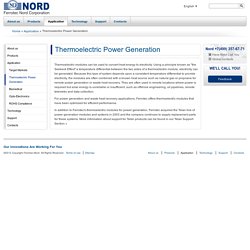 Using a principle known as "the Seebeck Effect" a temperature differential between the two sides of a thermoelectric module, electricity can be generated. Because this type of system depends upon a consistent temperature differential to provide electricity, the modules are often combined with a known heat source such as natural gas or propoane for remote power generation or waste heat recovery.

They are often used in remote locations where power is required but solar energy is unreliable or insufficient, such as offshore engineering, oil pipelines, remote telemetry and data collection. For power generation and waste heat recovery applications, Ferrotec offers thermoelectric modules that have been optimized for efficient performance. What makes a thermoelectric module a best device for cooling in industries? The entire working of this particular device is based on the peltier effect. 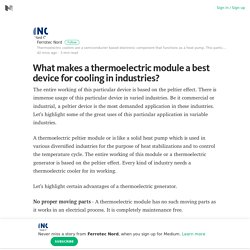 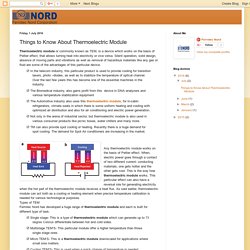 Silent operation, solid design, absence of moving parts and vibrations as well as removal of hazardous materials like any gas or fluid are some of the advantages of this particular device. Ø In the telecom industry, this particular product is used to provide cooling for transition lasers, photo –diodes, as well as to stabilize the temperature of optical channel. Over the last few years this has become one of the essential machines in the industry. Ø The Biomedical industry, also gains profit from this device in DNA analyzers and various temperature stabilization equipment. Ferrotec’s Thermoelectric Technical Reference Guide – Ferrotec Nord Corporation. A thermoelectric (TE) cooler, also known as thermoelectric module or Peltier cooler, functions as a small heat pump. 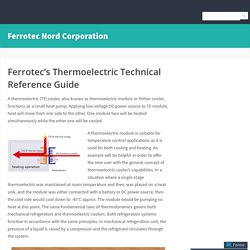 Applying low voltage DC power source to TE module, heat will move from one side to the other. One module face will be heated simultaneously while the other one will be cooled. A thermoelectric module is suitable for temperature control applications as it is used for both cooling and heating. An example will be helpful in order to offer the new user with the general concept of thermoelectric cooler’s capabilities.

In a situation where a single-stage thermoelectric was maintained at room temperature and then, was placed on a heat sink, and the module was either connected with a battery or DC power source, then the cold side would cool down to -40°C approx. In a freezer area, the refrigerator boils and absorbs heat which further causes the freezer to become cold. DC power application to the thermoelectric module results in electrons to move via semiconductor material. Manufacture of Thermoelectric Modules - Ferrotec-Nord: All you need to know about a Thermoelectric cooler.

A Thermoelectric cooler which is commonly called as a thermoelectric module or Peltier cooler, is actually a semiconductor based electronic device that works as a small heat pump. 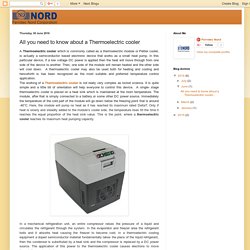 In this particular device, if a low voltage DC power is applied then the heat will move through from one side of the device to another. Then, one side of the module will remain heated and the other side will cool down. A thermoelectric cooler may also be used both for heating and cooling and henceforth is has been recognized as the most suitable and preferred temperature control application. Thermoelectric Generator, Thermal Generator. Thermoelectric power generation is an advanced technology of electric power generation relying on Peltier effect. 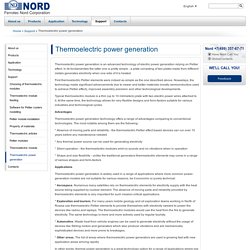 In its fundamentals the latter one is pretty simple - a plate consisting of two plates made from different metals generates electricity when one side of it is heated. First thermoelectric Peltier elements were indeed as simple as the one described above. Nowadays, the technology made significant advancements due to newer and better materials (mostly semiconductors used to achieve Peltier effect), improved assembly precision and other technological developments. Typical thermoelectric module is a thin (up to 10 milimeters) plate with two electric power wires attached to it. At the same time, the technology allows for very flexible designs and form-factors suitable for various industries and technological cycles. Advantages. Manufacture of Thermoelectric Modules - Ferrotec-Nord: Thermoelectric Generators: The New Revolutions of Power Generators. Thermoelectric generator is a class of solid state active devices which works on the phenomenon of seebeck effect.

The device is used to either convert the heat energy directly into electricity or vice versa means transform electrical energy into thermal energy for generating the heat or cool effect. The see beck effect or thermoelectric effect accomplish this task by a process of generating electric current by thermocouple and keeping the connection formed by two different metals at different temperatures. The efficiency goes up to 5 to 10 percentage. The Introduction of Thermoelectric Module – Ferrotec Nord Corporation. Thermoelectric modules are solid state heat pumps which are used to perform various functionalities such as temperature stabilization, temperature cycling, or cooling below ambient. Many products are manufactured using thermoelectric coolers, including CCD cameras, laser diodes, microprocessors, blood analyzers and portable picnic coolers.

Let’s discuss about the thermoelectric module along with the thermal and electric parameters involved. How the Thermoelectric Works? The module works on the concept of peltier effect and first discovered in 1834. Basic Thermoelectric Principles. Ferrotec's Thermoelectric Technical Reference Guide is a comprehensive technical explanation of thermoelectrics and thermoelectric technology. 2.1 THERMOELECTRIC MATERIALS: The thermoelectric semiconductor material most often used in today's TE coolers is an alloy of Bismuth Telluride that has been suitably doped to provide individual blocks or elements having distinct "N" and "P" characteristics.

Thermoelectric materials most often are fabricated by either directional crystallization from a melt or pressed powder metallurgy. Each manufacturing method has its own particular advantage, but directionally grown materials are most common. In addition to Bismuth Telluride (Bi2Te3), there are other thermoelectric materials including Lead Telluride (PbTe), Silicon Germanium (SiGe), and Bismuth-Antimony (Bi-Sb) alloys that may be used in specific situations.

Figure (2.1) illustrates the relative performance or Figure-of-Merit of various materials over a range of temperatures. Peltier Cooler Installation. 6.1 Important Installation Considerations Techniques used to install thermoelectric modules in a cooling system are extremely important. Failure to observe certain basic principles may result in unsatisfactory performance or reliability. Thermoelectric power generation. Thermoelectric power generation is an advanced technology of electric power generation relying on Peltier effect. In its fundamentals the latter one is pretty simple - a plate consisting of two plates made from different metals generates electricity when one side of it is heated. First thermoelectric Peltier elements were indeed as simple as the one described above. Nowadays, the technology made significant advancements due to newer and better materials (mostly semiconductors used to achieve Peltier effect), improved assembly precision and other technological developments.

To use the thermoelectric material for commercial purpose, it’s necessary to increase their efficiency and it is possible now by the use of doping tin selenide with sodium as a thermoelectric material researched by Northwestern University. This material produce large amount of electricity significantly instead of undoped material. The high efficiency peltier module configured from Bi2Te3 material is also available for lower range by Ferrotec nord. The modules may be applied for long time at a heat source of upto 1800C. Manufacture of Thermoelectric Modules - Ferrotec-Nord: Let’s Know about Thermal Generator! Thermal generator works on the concept of Seebeck effect. According to Seebeck effect, one side of the device is heated up in a manner that its temperature is greater than the other side and hence difference in voltage will be established.

Peltier Device: A Single Device Used for Cooling and Heating. The arising need of generating the cool and heat effect is generally accomplished by a phenomenon called as peltier effect. It is responsible to product heat and cool effect by conducting electric flux between two current conducting materials. All about Catering Services - Food and Party. Nov. 24, 2015 - PRLog -- In the world of fantasy, everyday is occupied with corporate or personal events, parties, functions, or weddings. The main thing of all such occasions is food. Every festival, birthday or event, all just look up that how good the food is?