Technology Will Save Us - Tech you can make at home. Squishy Circuits – Color Mixing with Light. A color-mixing squishy circuit. 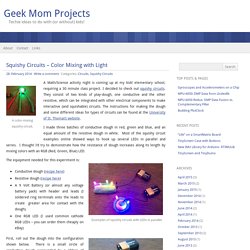 A Math/Science activity night is coming up at my kids’ elementary school, requiring a 30 minute class project. Electric Play Dough . Activities for Kids: Adventures In Learning . PBS Parents. Looking to amp up the fun and have the kids learn something about electricity? 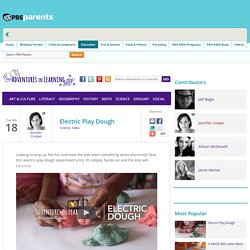 Give this electric play dough experiment a try. It’s simple, hands-on and the kids will l-o-v-e it! In this episode of Adventures in Learning, the kids have a blast with a cool project developed by AnneMarie Thomas of the St. Thomas Lab at the University of St. Thomas. Pin It. Josh Burker's Blog of Musings: Squishy Circuits Operation Game. I cooked up a batch of conductive dough. 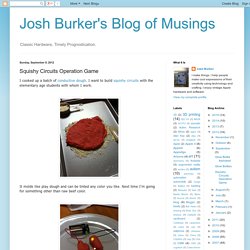 I want to build squishy circuits with the elementary age students with whom I work. It molds like play dough and can be tinted any color you like. Next time I'm going for something other than raw beef color. I used the conductive dough to build a squishy circuit version of Operation, where you remove the patient's organs and bones without touching the metal lining the hole. I upcycled a pair of chopsticks, a small cardboard box, and aluminum foil. Here is the circuit schematic for Operation. Play dough circuits 3: make fun sculptures › Tricks (ABC Science) The Surfing Scientist › Tricks Now that you've mastered some basic play dough electronics, apply your creative skills and produce your own shiny, flashy, beepy works of art. 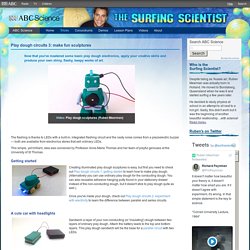 By Ruben Meerman The flashing is thanks to LEDs with a built-in, integrated flashing circuit and the nasty noise comes from a piezoelectric buzzer — both are available from electronics stores that sell ordinary LEDs. This simple, yet brilliant, idea was conceived by Professor Anne-Marie Thomas and her team of playful geniuses at the University of St Thomas. Getting started A cute car with headlights Play dough pussycat Flashing lights Buzzers Beeping robot with flashing light head ^ to top What's going on? Diodes make the world go round. Have fun with your flashing, beeping diode creations! Tags: preschool, physics, play-and-learning Published 30 May 2012. Explore Electronics Using Play Dough. Do you want to make it possible for a kid to make electronic circuits? 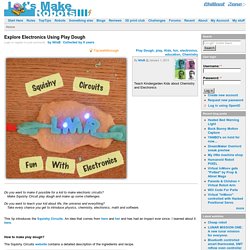 Make Squishy Circuit play dough and make up some challenges. Do you want to teach your kid about life, the universe and everything? Take every chance you get to introduce physics, chemistry, electronics, math and software. How to make a Rube Goldberg Machine with a Squishy Circuit. Cusumano_Chuck-ELP2012. Learn to Teach , Teach to Learn / Power to all the People. Squishy Circuits.

Yesterday I retweeted a tweet for a Squishy Circuits project page and mentioned I had done it as a holiday activity. 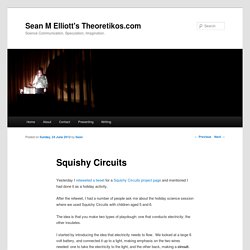 After the retweet, I had a number of people ask me about the holiday science session where we used Squishy Circuits with children aged 5 and 6. The idea is that you make two types of playdough: one that conducts electricity; the other insulates. I started by introducing the idea that electricity needs to flow. We looked at a large 6 volt battery, and connected it up to a light, making emphasis on the two wires needed: one to take the electricity to the light, and the other back, making a circuit. Then I introduced the idea that electricity flows along material we call a conductor, and is stopped by material we call an insulator.

We tried connecting into the circuit wood, wire, and a pencil. “So guys, electricity needs to flow in a circuit. We had green conducting playdough, and white playdough as insulating. Squishy Circuits+Thrifting+Stratego+Math=Fun. During our introduction to CEP811 we were asked to look at four different kits and pick one. 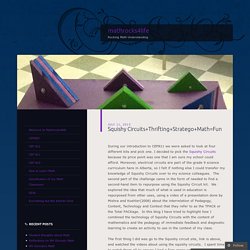 I decided to pick the Squishy Circuits because its price point was one that I am sure my school could afford. Moreover, electrical circuits are part of the grade 9 science curriculum here in Alberta, so I felt if nothing else I could transfer my knowledge of Squishy Circuits over to my science colleagues. The second part of the challenge came in the form of needed to find a second-hand item to repurpose using the Squishy Circuit kit. We explored the idea that much of what is used in education is repurposed from other uses, using a video of a presentation done by Mishra and Koehler(2008) about the interrelation of Pedagogy, Content, Technology and Context that they refer to as the TPACK or the Total PACKage.

The first thing I did was go to the Squishy circuit site, link is above, and watched the videos about using the squishy circuits. Making the playdough was easy enough. Step 1 Step 2 Step 3. Squishy_Circuits.pdf. Squishy. Rethinking Squishy Circuits. At Learn 2 Teach, Teach 2 Learn, one of the activities youth teachers take out to Boston community organizations each year is Squishy Circuits. 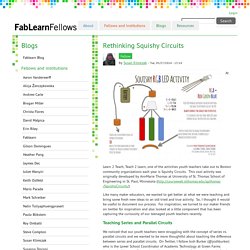 This cool activity was originally developed by AnnMarie Thomas at University of St. Thomas School of Engineering in St. Paul, Minnesota ( Like many maker educators, we wanted to get better at what we were teaching and bring some fresh new ideas to an old tried and true activity. So, I thought it would be useful to document our process. Doughcreatures. Squishy Circuits.