Premature Orgasm Affects Women Too, Study Suggests. Men aren't the only ones who might find themselves peaking too early in the sack. 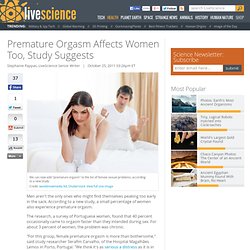 According to a new study, a small percentage of women also experience premature orgasm. The research, a survey of Portuguese women, found that 40 percent occasionally came to orgasm faster than they intended during sex. For about 3 percent of women, the problem was chronic. "For this group, female premature orgasm is more than bothersome," said study researcher Serafim Carvalho, of the Hospital Magalhães Lemos in Porto, Portugal. 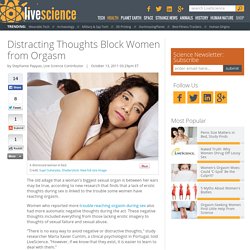 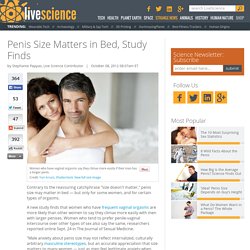 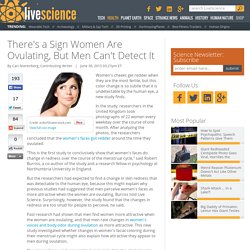 In the study, researchers in the United Kingdom took photographs of 22 women every weekday over the course of one month. After analyzing the photos, the researchers concluded that the women's faces got redder around the time they ovulated. "This is the first study to conclusively show that women's faces do change in redness over the course of the menstrual cycle," said Robert Burriss, a co-author of the study and a research fellow in psychology at Northumbria University in England. But the researchers had expected to find a change in skin redness that was detectable to the human eye, because this might explain why previous studies had suggested that men perceive women's faces as more attractive when the women are ovulating, Burriss told Live Science.

Aphrodisiacs – Natural Aphrodisiacs Food. Hot Stuff? 10 Unusual Sexual Fixations. 51 Sultry Facts About Sex. The 10 Most Surprising Sex Statistics. 6 (Other) Great Things Sex Can Do For You. 7 Surprising Reasons for Erectile Dysfunction. Lindsey Konkel, MyHealthNewsDaily Contributor | August 23, 2011 10:22am ET As many 30 million men in the United States experience erectile dysfunction (ED) the inability to get or maintain an erection firm enough for intercourse. 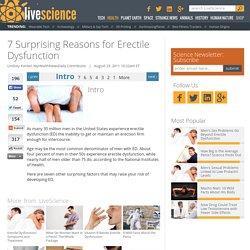 Age may be the most common denominator of men with ED. About four percent of men in their 50s experience erectile dysfunction, while nearly half of men older than 75 do, according to the National Institutes of Health. Here are seven other surprising factors that may raise your risk of developing ED. New Clue to Constant Sexual Arousal in Women. That pleasurable, tingling ache of sexual arousal can quickly turn torturous when it never ends.

An unknown number of women suffer from the constant sensations of persistent genital arousal disorder, which has no cure, and no known cause. But now researchers at Rutgers University say they've uncovered a clue: a small study showed a disproportionate number of women with persistent genital arousal disorder (or PGAD) have tiny growths called Tarlov cysts along their lower spines. "This is the very first connection that's been made between Tarlov cysts and PGAD. Many doctors haven't heard of either condition," said Barry Komisaruk, lead author of the study published May 17 in the Journal of Sexual Medicine. Pansexual: A 'New' Sexual Orientation?

Heterosexual, homosexual, bisexual — these are terms with which most people are familiar, but they aren't the only sexual orientations that exist in today's world.

Pansexual, a relatively new category of sexual identity, is characterized by physical or romantic attraction to others, regardless of their gender identity or biological sex. Pansexuality — sometimes known as omnisexuality — is derived from the Greek prefix pan-, meaning "all. " As such, pansexuals may be attracted to those of all biological sexes or gender identities — including men, women, those who don't identify with a specific sex or gender or those who are transsexual or transgender. This differentiates pansexuality from bisexuality, which denotes attraction to people of just two different sexes — male and female. The term has since been reclaimed by those who wish to connote their recognition of the fluidity of gender and their belief that there are more than two genders.

Surviving Infidelity: What Wives Do When Men Cheat. Dressed in a black suit with a subdued silk scarf, Silda Wall Spitzer stood by her husband, New York Gov. 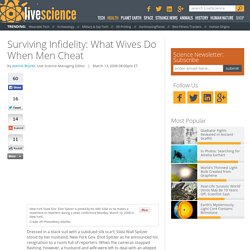 Eliot Spitzer as he announced his resignation to a room full of reporters. When the cameras stopped flashing, however, a husband and wife were left to deal with an alleged violation of marriage and above all, busted trust. Gov. Spitzer has referred publicly to the alleged infidelity as a "private matter," but the experience is rooted in human behavior and family sociology. Why Men and Women Get Jealous for Different Reasons. Cheating on a spouse or significant other is sure to cause feelings of jealousy and hurt in the spurned partner. 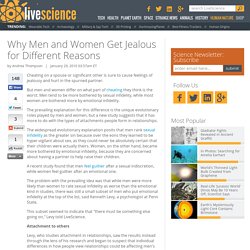 But men and women differ on what part of cheating they think is the worst: Men tend to be more bothered by sexual infidelity, while most women are bothered more by emotional infidelity. The prevailing explanation for this difference is the unique evolutionary roles played by men and women, but a new study suggests that it has more to do with the types of attachments people form in relationships. The widespread evolutionary explanation posits that men rank sexual infidelity as the greater sin because over the eons they learned to be hyper-vigilant about sex, as they could never be absolutely certain that their children were actually theirs. Women, on the other hand, became more bothered by emotional infidelity, because they are concerned about having a partner to help raise their children. 5 Ways Relationships Are Bad for Your Health. On Valentine's Day, the sight of couples holding hands and exchanging kisses might unleash a wave of jealousy in those who are single. 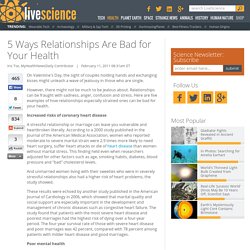 However, there might not be much to be jealous about. Relationships can be fraught with sadness, anger, confusion and stress. What Falling in Love Does to the Brain. Falling in love can wreak havoc on your body. Your heart races, your tummy gets tied up in knots, and you're on an emotional roller coaster, feeling deliriously happy one minute and anxious and desperate the next. Research shows that these intense, romantic feelings come from the brain.

In one small study, researchers looked at magnetic resonance images of the brains of 10 women and seven men who claimed to be deeply in love. The length of their relationships ranged from one month to less than two years. Participants were shown photographs of their beloved, and photos of a similar-looking person. Bionic Humans: Top 10 Technologies. The History of Pornography No More Prudish Than the Present. Pornography is often portrayed as one of the ills of today's society, evidence of modern moral decay brought to you by video cameras and broadband access. As it turns out, modern times have got nothing on the past. Pornography existed long before video or even photography, and many researchers think evolution predisposed humans for visual arousal (It's a lot easier to pass on your genes if the sight of other naked humans turns you on, after all).

Whichever way you slice it, the diversity of pornographic materials throughout history suggests that human beings have always been interested in images of sex. Lots and lots of sex. Pot Use May Mellow Out Men's Sexual Function. Marijuana users sometimes report that pot enhances their desire for sex. But a new review of research on marijuana and sexual health suggests that male smokers could be courting sexual dysfunction. Research on the topic is contradictory and few studies are high-quality, said study researcher Rany Shamloul, a physician with appointments at the University of Ottawa and Queen's University in Canada as well as the University of Cairo. But recent research – including the finding that the penis contains receptors for marijuana's active ingredient – suggests that young men may want to think about long-term effects before rolling a joint, Shamloul told LiveScience.

5 Ways Love Affects the Brain. By Tanya Lewis, Staff Writer | February 14, 2014 11:04am ET Credit: umnola, Shutterstock "Love looks not with the eyes, but with the mind," as Shakespeare's Helena said in "A Midsummer Night's Dream" — and perhaps neuroscientists would agree. Love might seem to move in mysterious ways, but scientists actually have a pretty good idea of what love does to the brain. Being in love floods the brain with chemicals and hormones that produce feelings of pleasure, obsession and attachment. Delaying Sex Makes Better Relationships, Study Finds. Delaying sex makes for a more satisfying and stable relationship later on, new research finds. Couples who had sex the earliest — such as after the first date or within the first month of dating — had the worst relationship outcomes.

"What seems to happen is that if couples become sexual too early, this very rewarding area of the relationship overwhelms good decision-making and keeps couples in a relationship that might not be the best for them in the long-run," study researcher Dean Busby, of Brigham Young University's School of Family Life, told LiveScience. Busby and his colleagues published their work Dec. 28 in the Journal of Family Psychology.

The study was supported by research grants from the School of Family Life and the Family Studies Center at Brigham Young University, which is owned by The Church of Jesus Christ of Latter-day Saints, or the Mormon Church. The intricate nature of sex. Does Circumcision Reduce Sexual Pleasure? Women's Sexual Readiness Tied to Heart Rate. 5 Things You Didn't Know About Circumcision. Gender Differences, Female Hormones & Human Brain. Penis Size Matters in Bed, Study Finds. 10 Things Every Woman Should Know About a Man's Brain. 10 Things Every Woman Should Know About a Man's Brain. Booty Call: How to Spot a Fertile Woman. Fertile Women More Likely to Wear Red. Fertile Gals Look & Sound More Attractive: Study. How Big Is the Average Penis? Science Finds Out.