5 Best Windows Phones You Can Buy. If you're in the market for a new mobile, but aren’t tempted by an iPhone or Android smartphone, Windows Phone is the platform for you. 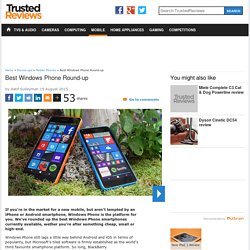 We’ve rounded up the best Windows Phone smartphones currently available, wether you're after something cheap, small or high-end. Windows Phone still lags a little way behind Android and iOS in terms of popularity, but Microsoft’s tiled software is firmly established as the world's third favourite smartphone platform. So long, BlackBerry. Our list includes five of the best Windows Phones. Click the ‘Next’ arrow above or browse the list below. Problem loading page. Problem loading page. With TV technology constantly on the move, the mid-to-entry level HDTV segment has enjoyed continually improved picture quality along with a growing list of advanced features once reserved for the premium tier. 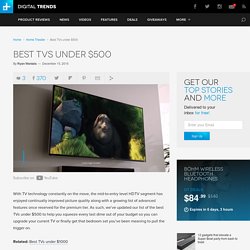 As such, we’ve updated our list of the best TVs under $500 to help you squeeze every last dime out of your budget so you can upgrade your current TV or finally get that bedroom set you’ve been meaning to pull the trigger on. Those looking to save some serious green will find the latest choices in our list bigger, brighter, and better than ever. And just to keep you caught up on the latest tech, this year we’ve even added a 4K Ultra HD set to the pile, which comes with all of the hottest new features and access to the best-looking content out there. You may never leave your couch again. Vizio 43” M-Series M43-C1 Ultra HD Full‑Array LED Smart TV, 2015 ($500-550) Sitting in the middle of Vizio’s expansive lineup, the M-series is loaded with options.

Buy it now from: Amazon B&H. Best Projectors Under $1,000. The drive to produce bigger and badder television screens has been raging since the technology first caught hold in America during the late ’40s. 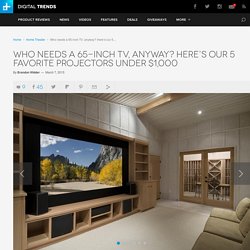 Today, LED TVs can be had at sizes up to 90-inches, but they’ll cost you big time. If what you really want is a 10-foot HD picture up on your wall, then what you need is a capable projector. For the best experience and easiest installation, you’ll want to consider factors like throw ratios, keystone correction, brightness and contrast capabilities and projector type (i.e. LG Minibeam Nano: News, Features, Price. In the last 15 years, as digital music has slowly but surely extinguished the analog flame, the focus with digital audio has always been on enabling easy access, portability, and manageability of the content. 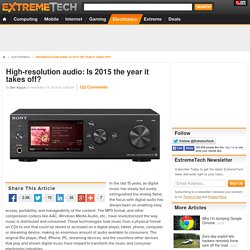 The MP3 format, and other compression codecs like AAC, Windows Media Audio, etc., have revolutionized the way music is distributed and consumed. These technologies took music from a physical format on CDs to one that could be stored or accessed on a digital player, tablet, phone, computer, or streaming device, making an enormous amount of audio available to consumers. The original Rio player, iPod, iPhone, PC, streaming devices, and the countless other devices that play and stream digital music have helped to transform the music and consumer electronics industries. Best Music Apps for iPhone, Android, and Windows Phone. Pens Are Making a High-Tech Comeback. Why the 64-bit Version of Windows is More Secure. Most new PCs have been shipping with the 64-bit version of Windows — both Windows 7 and 8 — for years now. 64-bit bit versions of Windows aren’t just about taking advantage of additional memory. 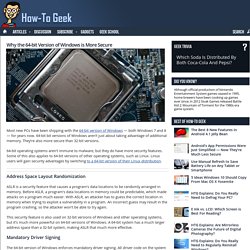 They’re also more secure than 32-bit versions. 64-bit operating systems aren’t immune to malware, but they do have more security features. Some of this also applies to 64-bit versions of other operating systems, such as Linux. Linux users will gain security advantages by switching to a 64-bit version of their Linux distribution. Address Space Layout Randomization ASLR is a security feature that causes a program’s data locations to be randomly arranged in memory. The verdict is in: Silk Road founder Ross Ulbricht guilty on all charges. Following a three-week trial, jurors in the Silk Road case have found Ross Ulbricht guilty on all charges. 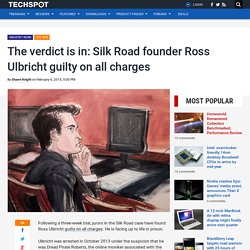 He is facing up to life in prison. Ulbricht was arrested in October 2013 under the suspicion that he was Dread Pirate Roberts, the online moniker associated with the creation of online drug marketplace Silk Road. The defense team, led by Joshua Dratel, admitted up front at Ulbricht had created the site as an economic experiment but handed over ownership to others after just a few months. Dratel claimed that Ulbricht was brought back into the mix late in the game to serve as a fall man. At one point, Dratel suggested that former Mt. What’s more, two of the defense’s technical witnesses weren’t allowed to testify for procedural reasons. The prosecution, meanwhile, presented a mound of evidence that contradicted much of what Dratel had to say.

A separate trial on charges including attempted commission of a murder-for-hire is still ongoing in Baltimore. How to Add Bluetooth to Any Old Pair of Speakers. We love Bluetooth and all its possibilities. 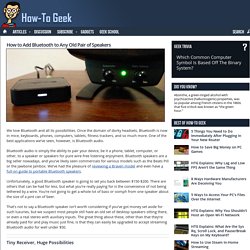