What is storage area network (SAN)? - Definition from WhatIs.com. A storage-area network (SAN) is a dedicated high-speed network (or subnetwork) that interconnects and presents shared pools of storage devices to multiple servers. 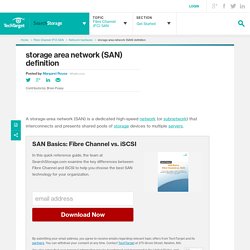 By submitting your email address, you agree to receive emails regarding relevant topic offers from TechTarget and its partners. You can withdraw your consent at any time. Contact TechTarget at 275 Grove Street, Newton, MA. You also agree that your personal information may be transferred and processed in the United States, and that you have read and agree to the Terms of Use and the Privacy Policy. A SAN moves storage resources off the common user network and reorganizes them into an independent, high-performance network. A storage-area network is typically assembled using three principle components: cabling, host bus adapters (HBAs) and switches.

Storage-area networks are managed centrally, and Fibre Channel (FC) SANs have the reputation of being expensive, complex and difficult to manage. What is iSCSI (Internet Small Computer System Interface)? - Definition from WhatIs.com. iSCSI is a transport layer protocol that describes how Small Computer System Interface (SCSI) packets should be transported over a TCP/IP network. 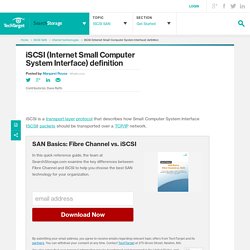 By submitting your email address, you agree to receive emails regarding relevant topic offers from TechTarget and its partners. You can withdraw your consent at any time. Contact TechTarget at 275 Grove Street, Newton, MA. You also agree that your personal information may be transferred and processed in the United States, and that you have read and agree to the Terms of Use and the Privacy Policy. iSCSI, which stands for Internet Small Computer System Interface, works on top of the Transport Control Protocol (TCP) and allows the SCSI command to be sent end-to-end over local-area networks (LANs), wide-area networks (WANs) or the Internet. Unlimited Online Storage, Backup & Cloud Content Management. Free Cloud Storage for Files - pCloud. How to set-up a virtual machine [using VMWare] VMware vCenter Server Virtualization & Server Management Software. VMware Storage and Software-defined Storage (SDS) Solutions Blog Posts. 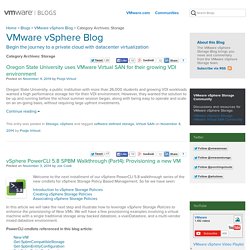 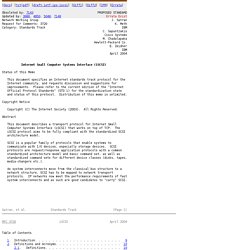 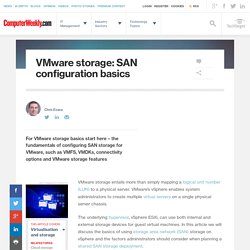 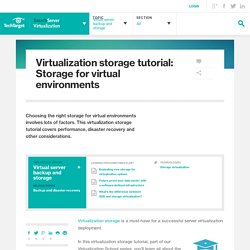 In this virtualization storage tutorial, part of our Virtualization School series, you'll learn all about the different factors to consider when choosing storage for virtual environments. The performance, scalability, energy efficiency and disaster recovery benefits of a virtualization storage platform are all key factors to consider when deciding if it's the right fit for your organization. Converged Storage for VMware. Imagine what you can achieve by combining the power of VMware vSphere with storage platforms designed to eliminate the challenges of server and client virtualization. 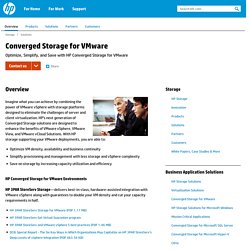 HP’s next generation of Converged Storage solutions are designed to enhance the benefits of VMware vSphere, VMware View, and VMware vCloud Solutions. Storage Architecture Guides - on StorageSearch.com. Storage standards are weak standards that are driven by component considerations. 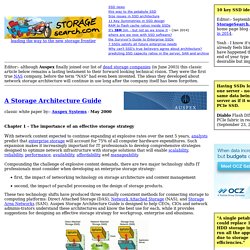 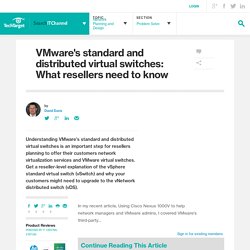 Common Networking Configurations. Features | Documentation | Knowledge Base | Discussion Forums Prev Contents Last Next The following sections illustrate the networking configurations that are set up for you automatically when you choose the standard networking options in the New Virtual Machine Wizard or virtual machine settings editor. 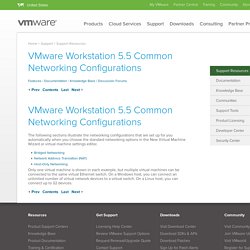 Only one virtual machine is shown in each example, but multiple virtual machines can be connected to the same virtual Ethernet switch. On a Windows host, you can connect an unlimited number of virtual network devices to a virtual switch. On a Linux host, you can connect up to 32 devices. VMware vSphere Features: Virtual Networking and Management. VMware NSX Introduction. GCN VMware Virtualization Cloud HPC 2014. Connect to VMWare virtual machines using Remote Desktop. Had a short training on VMWare on Tuesday, the software development department finally got the official permission (read: get a license) to use VMWare Workstation.

I’m no stranger to Virtual Machines (VMs) – started playing with Virtual PC 2005 a fwe years back and I understood the general concepts of hardware virtualization. The biggest problem I have with VMs in general is the slowness; I’d rather develop directly on my PC, which is faster. Understanding Virtual Networking in VMware Workstation 9. Introduction In my opinion, VMware Workstation is the premier and ideal platform for virtualizing desktops on your local Windows or Linux laptop or desktop computer. This is because Workstation offers the most maturity and functionality out of any of the desktop-based hypervisors. Workstation has a strong snapshot manager, the greatest list of supported guest operating systems, remote virtual machine management/control with the new WSX (see my article – Managing VMware Workstation VMs Remotely with WSX), connectivity to vSphere in the datacenter for VM management and import/export and, finally, the most mature virtual networking.

Understanding VMware common networking terminology. First, let's go over some of the basic terminology that you will need to become familiar with in order to be successful with this blog. Within VMware Workstation you have the ability to configure the following virtual networks: Bridged networkingHost onlyNetwork address translationCustomVirtual switchBridgeHost virtual adapterDHCP serverVirtual network adapter Bridged networking When you use bridged networking, your virtual machine is connected to the LAN as if it were a physical PC connected to your network. It can be assigned a DHCP address or a static IP address. Host only When you use a host-only network, your virtual machines can communicate with the host PC only.

5 questions about VMware's new virtual networking platform. VMware made news this week, announcing that technology it acquired from virtual networking company Nicira last year will be integrated into the company's existing networking technology. VMware is merging the networking and security product line from vCloud with the Nicira Network Virtualization Platform (NVP), which it purchased last year for $1.2 billion.

The new product family will be dubbed VMware NSX, and is meant to bring virtual networking technology to the masses when it is released in the third quarter of this year. [ HAPPY PI DAY! 10 awesome ways to celebrate Pi Day 2013 ] Using VMware: Understanding the Virtual Switch. Introduction. VMware NSX: Game Changer for Data Center Networks. VMware's network virtualization product, NSX, may upend data center networks the same way the hypervisor changed servers. Now that VMware has conquered data center computing via server virtualization, the company is opening a beachhead on the network via its NSX product, which is being officially launched today at VMworld in San Francisco.

If you already have a firm understanding of how networking works, then you can skip the following paragraph.