Michal Beth Dinkler. In “A Room of One’s Own,” aVirginia Woolf contends that nineteenth-century society rejected women writers out of fear, which manifested itself in a conflict of values: “This is an important book, the critic assumes, because it deals with war. 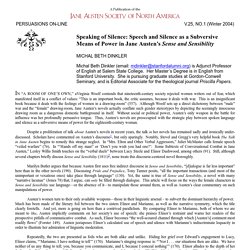 This is an insignificant book because it deals with the feelings of women in a drawing-room” (557). Although Woolf sets up a direct dichotomy between “male” war and the “female” drawing-room, Jane Austen’s novels actually conflate such gender stereotypes by depicting the seemingly innocuous drawing room as a dangerous domestic battleground in itself. Without social or political power, Austen’s only weapon in the battle for influence was her profoundly persuasive tongue. Thus, Austen’s novels are preoccupied with the strategic play between spoken language and silence as a subversive means of power for the eighteenth-century woman. Repeatedly, the two are presented as foils who are both alike and unlike. Notes 1. 2. 3. Works Cited Austen, Jane. Solved: Why Jane Austen's characters get ill from the rain. At least that's that answer from a leading medical historian who claims the references are less figurative and more an accurate depiction of the dangers of venturing out in the rain in 19th-century Britain. 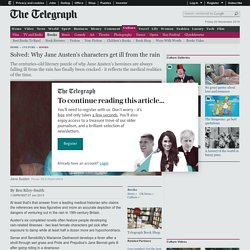 Austen's six completed novels often feature people developing rain-related illnesses - two lead female characters get sick after exposure to damp while at least half a dozen more are hypochondriacs. Sense and Sensibility's Marianne Dashwood develops a fever after a stroll through wet grass and Pride and Prejudice's Jane Bennet gets ill after going riding in a downpour. Professor Michael Warboys said the scenes reflected medical understanding in the 19th-century in which a person's constitution was believed to be linked to a variety of factors including the weather. He said women were considered to be of a weaker constitution and thus more susceptible to environmentally "exciting causes" of disease such as extremes of weather, damp, shock and bad air. ESSAY WRITING TIPS. 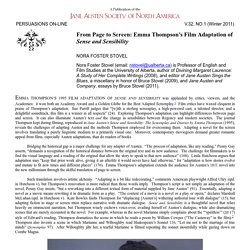 Exploring Thompson’s adaptation can highlight differences between page and screen. It can also illuminate Austen’s text and the change in sensibilities between Regency and modern societies. The journal Thompson kept during filming, reproduced in Jane Austen’s Sense and Sensibility: The Screenplay and Diaries by Emma Thompson (1995), reveals the challenges of adapting Austen and the methods Thompson employed for overcoming them. Adapting a novel for the screen involves translating a purely linguistic medium to a primarily visual one. Notes 1. 2. 3. Sense and Sensibility - Emma Thompson's golden globe speech. 1996 - Drama: Sense and Sensibility. Greg Wise & emma thompson. Jane Austen, what some women should not have said about her. 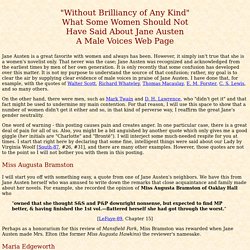 Charlotte Brontë is such a great favorite to so many that I simply had to include her thoughts on Jane Austen. The literary critic G.H. Lewes (1817-1878) admired Jane Eyre and said so in print, but he may have admired Jane Austen's novels even more because he compared her to Goethe, Fielding, and Cervantes and then with Shakespeare and Molière. Charlotte wrote to express her gratitude for his kindness to herself, but couldn't let it stand there and began to express her views on Jane Austen of whom she had never before heard. I see that Charlotte Brontë could not fully comprehend what was sagacious and profound. Not if I can help it.

The next excerpt is from a letter to W.S. Blast! This next bit is not quite so funny because these final quotes are from George Eliot (Mary Ann Evans, later Cross) (1819-1880), so they have to be taken seriously. "... JANE AUSTEN by Virginia Woolf. How to NOT retell the story. What Is Conflict in Literature? What makes a book or movie exciting? 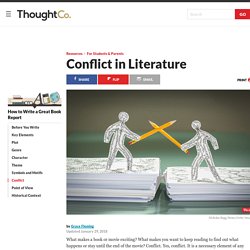 What makes you want to keep reading to find out what happens or stay until the end of the movie? Conflict. Yes, conflict. It is a necessary element of any story, driving the narrative forward and compelling the reader to stay up all night reading in hopes of some sort of closure. Most stories are written to have characters, a setting and a plot, but what sets apart a truly great story from the one that might not finish reading is conflict. Basically we can define conflict as a struggle between opposing forces - two characters, a character and nature, or even an internal struggle - conflict provides a level of angst into a story that engages the reader and makes him or her invested in finding out what happens. First, you need to understand the different types of conflict, which can essentially be broken down into two categories: internal and external conflict. The most common kinds of conflict are: Jane Austen Gazetteer - Sense and Sensibility - England.