Horrible Histories – Boudicca Lyrics. [Intro]Gonna cause a stinkWon't be the first to blinkI'm not who you thinkDon't mess with me, I'm Boudicca [Verse 1]My husband Prasutagus died, he was a Celtic kingI was his queen, so due to me was half of everythingRoman law gave half to me, so half was what they got'Til their nasty soldiers came and took the blessed lotHey mister, I say you got the wrong end of the stickHis answer turned this sister into one angry chick [Chorus]No man, Roman'll push around this womanYou won't get far with BoudiccaBowmen, yeomen, smash the Roman foemenAll say yah (yah!) 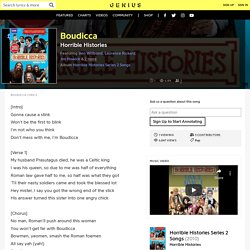 Boudicca [Verse 2]I built a massive army, headed straight for the cityBeat 'em all with ease, unlike me, it wasn't prettyChopped 'em and hacked, but what made their red blood curl(Bad enough being beaten, but beaten by a girl?) Horrible Histories - Boudicca. Roman York - Meet the People of the Empire. Romans: Daily Life. Roman England, the Roman in Britain 43 - 410 AD.

Lessons 15 and 17 Great Roman Britain Figures. How did the Romans change Britain? - BBC Bitesize. FC Roman Britain – new history chapter. Trading goods – Britons and Roman markets. FC revisited Lesson 11 stonehenge. Silence of the stones STONEHENGE TES. Stonehenge Skyscape. The Skyscape website has been created by English Heritage to enable people around the world to experience the skies above the iconic stone circle, to learn about movements of the sun, moon and planets and to see the solar alignment at Stonehenge Aside from the technical and informational aspects of Skyscape it’s also our hope that you’ll enjoy it from a more human perspective. 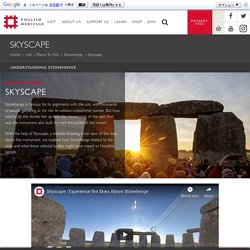 We’ve created a webpage which offers a small escape, a pleasant place to visit, to which you can return frequently, even within a single day, and connect with the land, the stones and the skies above. Stonehenge Skyscape. History of Stonehenge (in One Take) Stonehenge For Kids. The History of Stonehenge for Kids: Stonehenge for Children - FreeSchool. Lesson 11 Stonehenge. FC LESSON 1 AND 2 PREHISTORY AND LUCY. Britain's prehistoric catastrophe revealed: How 90% of the neolithic population vanished in just 300 years. Extraordinary new genetic evidence is revealing how Britain experienced a mysterious almost total change in its population in just a few centuries after the construction of Stonehenge. 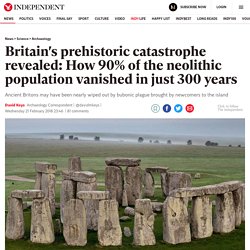 It suggests that some sort of social, economic or epidemiological catastrophe unfolded. The great 20-30 tonne stones of Stonehenge were erected by Neolithic farmers whose ancestors had lived in Britain for at least the previous 1,500 years – and new genetic research on 51 skeletons from all over Neolithic Britain has now revealed that during the whole of the Neolithic era, the country was inhabited mainly by olive-skinned, dark-haired Mediterranean-looking people. We’ll tell you what’s true. You can form your own view. From 15p €0.18 $0.18 USD 0.27 a day, more exclusives, analysis and extras. But how this dramatic population change occurred is an almost complete mystery. There’s absolutely no evidence for any large-scale conflict – so warfare or genocide is almost certainly not the explanation. 7 Intruiging Facts About Stonehenge, England's Mysterious Neolithic Ruin. Stock Photos from The Walker/ShutterstockThis post may contain affiliate links. 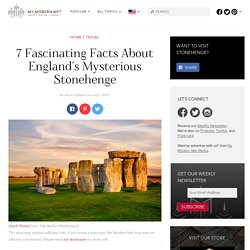 If you make a purchase, My Modern Met may earn an affiliate commission. Please read our disclosure for more info. One of the most famous ancient monuments in history, Stonehenge has long captured the imagination of the public. The prehistoric monument, which is located in Wiltshire, England, is shrouded in mystery. Its enigmatic nature has made the site infamous since its rediscovery in the 18th century and now over 1 million people a year flock to walk among the stones.

What is it about Stonehenge that makes it so fascinating? A UNESCO World Heritage Site since 1986, Stonehenge has become so popular with visitors that there are now ropes to prevent the public from getting too close and damaging the stones. With so much mystery surrounding Stonehenge, its popularity means that scientists and archaeologists have been researching the site extensively.

Stonehenge Wasn’t Built All at Once. Lesson 8 Lucy. Writing. Writing is the physical manifestation of a spoken language. 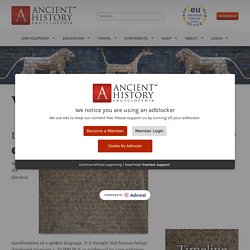 It is thought that human beings developed language c. 35,000 BCE as evidenced by cave paintings from the period of the Cro-Magnon Man (c. 50,000-30,000 BCE) which appear to express concepts concerning daily life. These images suggest a language because, in some instances, they seem to tell a story (say, of a hunting expedition in which specific events occurred) rather than being simply pictures of animals and people.

Written language, however, does not emerge until its invention in Sumer, southern Mesopotamia, c. 3500 -3000 BCE. This early writing was called cuneiform and consisted of making specific marks in wet clay with a reed implement. The writing system of the Egyptians was already in use before the rise of the Early Dynastic Period (c. 3150 BCE) and is thought to have developed from Mesopotamian cuneiform (though this theory is disputed) and came to be known as heiroglyphics. Writing & History. LESSON 1 AND 2 PREHISTORY AND LUCY.