RFID and Baggage Tracking. Today I learned a lesson that I hope never to learn again. 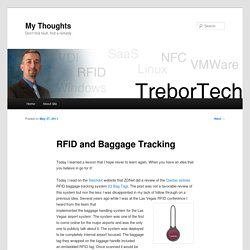 When you have an idea that you believe in go for it! Today I read on the Slashdot website that ZDNet did a review of the Qantas airlines RFID baggage tracking system (Q Bag Tag). The post was not a favorable review of this system but non the less I was disappointed in my lack of follow through on a previous idea. Several years ago while I was at the Las Vegas RFID conference I heard from the team that implemented the baggage handling system for the Las Vegas airport system. After leaving the conference I was sitting in that same airport thinking about the system that was handling my bag and a thought came to me. Now what does the customer get for this fee? What does the airport get? I feel confident that Qantas will fix their problems and the system will be successful if done right.

Here is a photo of the RFID tag placed on my wife’s luggage when she left the Las Vegas Airport. Getting Started - Let's Encrypt - Free SSL/TLS Certificates. Anyone who has gone through the trouble of setting up a secure website knows what a hassle getting and maintaining a certificate can be. 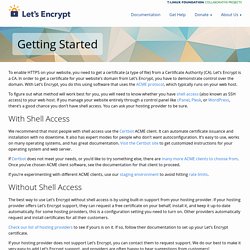 Let’s Encrypt automates away the pain and lets site operators turn on and manage HTTPS with simple commands. Using Let’s Encrypt is free, so there is no need to arrange payment. If you’d like to know more about how Let’s Encrypt works behind the scenes, check out our how it works page. We recommend that most people start with the certbot client. How to Export and Use SSL Session Keys to Decrypt SSL Traces Without Sharing the SSL Private Key. Just-in-Time Certificate Registration for AWS IoT.

We launched AWS IoT at re:Invent (read AWS IoT – Cloud Services for Connected Devices for an introduction) and made it generally available last December. 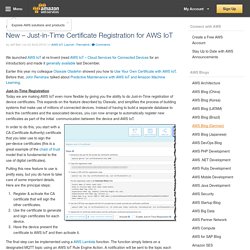 Earlier this year my colleague Olawale Oladehin showed you how to Use Your Own Certificate with AWS IoT. Before that, John Renshaw talked about Predictive Maintenance with AWS IoT and Amazon Machine Learning. Just-in-Time Registration Today we are making AWS IoT even more flexible by giving you the ability to do Just-in-Time registration of device certificates. This expands on the feature described by Olawale, and simplifies the process of building systems that make use of millions of connected devices. Instead of having to build a separate database to track the certificates and the associated devices, you can now arrange to automatically register new certificates as part of the initial communication between the device and AWS IoT.

Putting this new feature to use is pretty easy, but you do have to take care of some important details. Untitled. LibreSSL. Gl Inet - homeroam. GL.inet with external antenna. 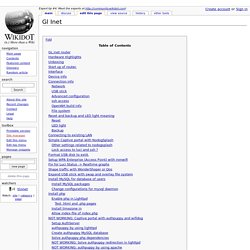 Bought on ebay, and shipped to Denmark, Europe. 250 DKK, which is about 30 euro. Delivery date 9 days after. This a very cool box! It is cheap! It comes pre-installed with OpenWrt, no hazzle.It is powered by mini-USB. The band is 2.4 GHz(802.11g+n). I am for using it with a 3G or 4G modem, and sharing the internet over WLAN. Advanced configuration will be, a user setup whit a captive portal A desired configuration of speed, so guests only have a small broadband consumption. Model CPU Ram Flash Network USB Serial JTag 6416A Atheros AR9331 @ 400MHz 64MiB 16MiB 2 1 x 2.0 Yes ? OpenSSL. FreeRADIUS: The world's most popular RADIUS Server. GitHub - Yubico/u2fval: Python based U2F Validation Server.

OpenPGP.org - Downloads. The best place to go for downloading free software that implements the OpenPGP standard is The International PGP Home Page. 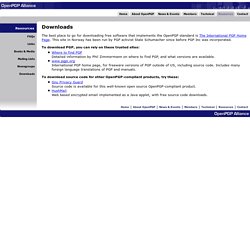 This site in Norway has been run by PGP activist Stale Schumacher since before PGP Inc was incorporated. To download PGP, you can rely on these trusted sites: Where to find PGP Detailed information by Phil Zimmermann on where to find PGP, and what versions are available. Www.pgpi.org International PGP home page, for freeware versions of PGP outside of US, including source code. Includes many foreign language translations of PGP and manuals. The International PGP Home Page. Encryption Software for Windows - Free downloads and reviews. GNU Crypto - GNU Project - Free Software Foundation. Introduction | Downloads | Help wanted | Project status | GNU Keyring file format | Documentation | Note on primality testing | Configuration parameters | Building GNU Crypto | Tools | Mailing lists | Report a bug | Coding styles | Logos News: GNU Crypto has been merged into GNU Classpath, and we will be maintaining the code there. 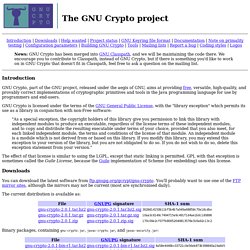 We encourage you to contribute to Classpath, instead of GNU Crypto, but if there is something you'd like to work on in GNU Crypto that doesn't fit in Classpath, feel free to ask a question on the mailing list. Introduction GNU Crypto, part of the GNU project, released under the aegis of GNU, aims at providing free, versatile, high-quality, and provably correct implementations of cryptographic primitives and tools in the Java programming language for use by programmers and end-users. Encryption software. Encryption software is software that can encrypt and decrypt data, often in the form of files on a hard drive or packets sent over a network. 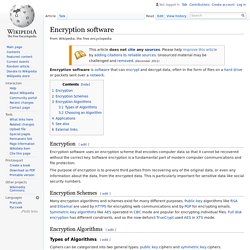 Encryption[edit] Encryption software uses an encryption scheme that encodes computer data so that it cannot be recovered without the correct key. Software encryption is a fundamental part of modern computer communications and file protection. The purpose of encryption is to prevent third parties from recovering any of the original data, or even any information about the data, from the encrypted data. This is particularly important for sensitive data like social security numbers.