Barbra Streisand's early career to be revealed in never before seen photographs in new book  More than 240 images capture the star's early years in HollywoodCollector's Edition is limited to 1,000 copies costing $750 eachArt Editions limited to 100 copies each to be sold for $1,800 By Annabel Grossman for MailOnline Published: 07:53 GMT, 5 September 2014 | Updated: 11:04 GMT, 5 September 2014 Never before seen photos of a young Barbra Streisand fans during her earliest years in Hollywood are to be published in a new coffee table book. 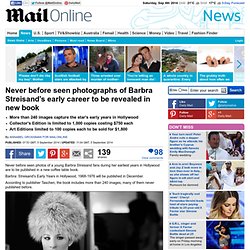 What is Skinhead subculture. Written by Luke Svarc in Fashion History on the 28th April 2014 / 0 Comments The Skinhead subculture originated in the 1960s as a means of convenience and influence, heavily influenced by Mods but born as a result of lesser income and lower standards of living. 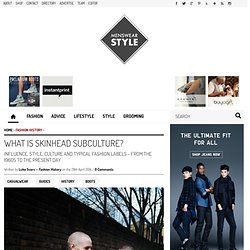 A far cry from today, we are continuing to see the subcultures roots in modern fashion with brands such as Doc Marten parading the high street and TV shows such as This is England on our screens. This is England 86 For young girls and guys throughout the UK with a smaller budget than their Mod peers, the Skinhead subculture was easier to buy into and items purchased suited their lifestyle and employment circumstances including work boots, flight jackets and braces. History Of Mod Style – Looking Into The Origin Of Mod Style.

The history of mod style can be traced back to late 1950s in London, England and peaked in the early to mid 1060s. 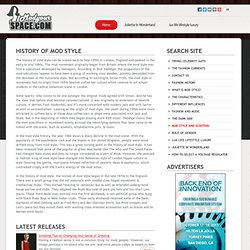 The mod movement originally began from Britain where the mod style was first a subculture developed by teenagers. According to Dick Hebdige, the progenitors of the mod subculture "appear to have been a group of working class dandies, possibly descended from the devotees of the Italianate style. But according to sociologist Simon Frith, the mod style or movement had its origin from 1950s beatnik coffee bar culture which catered to art school students in the radical bohemian scene in London. Steve Sparks, who claims to be one amongst the original mods agreed with Simon.

And he has the view that before mod became commercialized, it was originally an extension of beatnik culture, it derives from modernist, and it’s more concerned with modern jazz and with Sartre as well as existentialism. SUPERSELECTED - Black Fashion Magazine Black Artists Black Writers. Brand-itorials - Companies use magazine-style content to enhance customer experience. Feminized Athleticism - The empowerment of young girls rages on in the sports industry. David Lynch returning to 'Twin Peaks'? 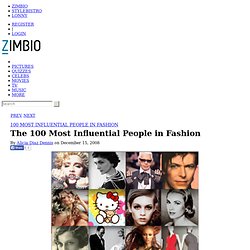 Constraints of what we can afford, what's socially acceptable, and for many, the way we'd like to be perceived all play a role. And there are people: those who created the clothing, those who popularized it, those who artfully captured its relevance, and those who moved it into mass production. Damn, New York! Check Out Real NYC Style On The Streets During Fashion Week. While fashion week unfolds at Lincoln Center next year’s trends are being created on the streets. 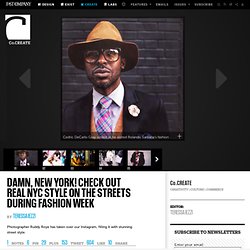 Brooklyn-based photographer Ruddy Roye has been capturing the street style innovators walking the asphalt runways of New York’s five boroughs and spilling out of the “tents” during Fashion Week--and sharing it all via our Instagram feed. Roye, a photojournalist and self-described "Instagram activist," has been capturing people on the streets of New York for years, often showing his followers a look at the city they might not otherwise see. In addition to shooting portraits of New Yorkers, Roye has captured the style of the Congolese "Sapeurs" and Jamaican dancehall culture. He took over The New Yorker's Instagram feed in October of 2012 with his images taken during Hurricane Sandy. "Photography," says Roye, "is finding a piece of me in the eyes or essence of everyone and everything I photograph. Did anything surprise him about shooting the people of Fashion Week?