Why Video Marketing Will Dominate In 2017? Have you recently hovered over a smartphone and chuckled at an adorable viral video with a friend or colleague? 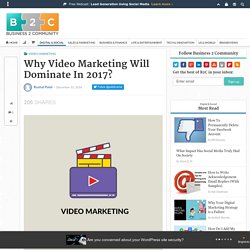 Did you recently share a video on your social media page that had some powerful political talking points? There’s just something about a funny or informative video that makes us want to share it with our friends, family and colleagues. Destination Teen: Missguidedâs Social Media Mad Flagship. British fast fashion womenswear e-tailer Missguided has moved into bricks-and-mortar commerce with the opening of its first standalone flagship store in Westfield Stratford City shopping mall, east London. 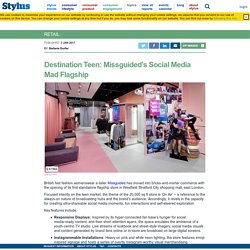 Focused intently on the teen market, the theme of the 20,000 sq ft store is ‘On Air’ – a reference to the always-on nature of broadcasting hubs and the brand's audience. Accordingly, it revels in the capacity for creating ultra-shareable social media moments, fun interactions and self-steered exploration. Key features include: OP-ED: Millennials Are Re-writing The Rules & Stepping Outside The Box By Getting Rid of The Box Altogether.

Special interest has been taken with the millennials. 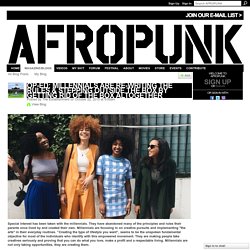 They have abandoned many of the principles and rules their parents once lived by and created their own. Millennials are focusing in on creative pursuits and implementing "the arts" in their everyday routines. “Creating the type of lifestyle you want”, seems to be the unspoken fundamental objective for most of the individuals who identify with this empowered movement. They are making people take creatives seriously and proving that you can do what you love, make a profit and a respectable living. Millennials are not only taking opportunities, they are creating them. 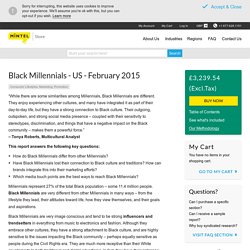 They enjoy experiencing other cultures, and many have integrated it as part of their day-to-day life, but they have a strong connection to Black culture. Their outgoing, outspoken, and strong social media presence – coupled with their sensitivity to stereotypes, discrimination, and things that have a negative impact on the Black community – makes them a powerful force.”– Tonya Roberts, Multicultural Analyst This report answers the following key questions: Black Consumers Still Set Trends and Dictate Popular Culture. This article is from the archive of our partner Black consumers are an underestimated force in the American economy, but not for long. 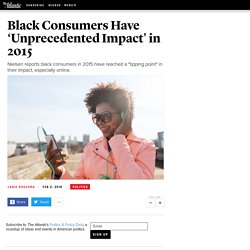 A new Nielsen report on “the untold story” of black consumers, especially affluent ones, shows that as the black population grows, so will its economic influence and buying power. Our Reports – ASOS Plc. What were your biggest environmental challenges in 2012? 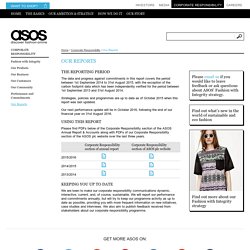 Our biggest environmental challenge as a rapidly growing business is, by far, how to manage our carbon emissions from customer deliveries. We now deliver over 12 million items per year. Two thirds of ASOS’ carbon footprint is attributable to overseas deliveries, most of it from air freight. We purchase over 3 million kg of packaging annually to help protect our products during transit, so we have a clear responsibility here to use lighter packaging that can also be completely recycled by our customers. What solutions have you put in place for packaging?

Gap Pulls ‘Dehumanizing' Ad for Ellen DeGeneres Children’s Clothing Line. On Friday, the GapKids official Twitter account tweeted the company’s latest advertisement for its GapKids x ED clothing line, captioning the post: “Meet the kids who are proving that girls can do anything.” 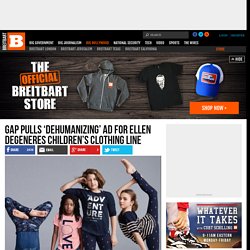 But social media users quickly called the ad racist for depicting a white girl leaning on a smaller black girl for support. “While all of the girls are adorable, and indeed, all of them should grow up to be and do anything, it becomes problematic when the black child is positioned to be a white child’s prop,” Kirsten Savali wrote in an op-ed for The Root, calling the ad “dehumanizing.” Diversity at NYFW: 10 Brands That Got It Right. The Next Civil Rights Movement? Kareem Jackson, a St. 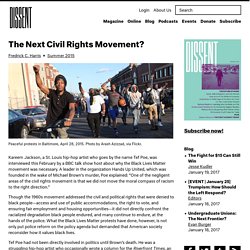 Louis hip-hop artist who goes by the name Tef Poe, was interviewed this February by a BBC talk show host about why the Black Lives Matter movement was necessary. A leader in the organization Hands Up United, which was founded in the wake of Michael Brown’s murder, Poe explained: “One of the negligent areas of the civil rights movement is that we did not move the moral compass of racism to the right direction.” The Targeting of Young Blacks By Law Enforcement: Ben Jealous in Conversation With Jamelle Bouie. (AP Photo/Ted S. 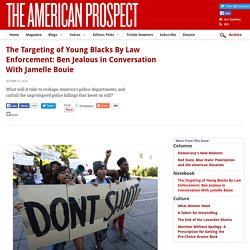 Warren) Protesters hold a sign that reads "Don't Shoot" as they attend an evening rally Tuesday, August 19, 2014, in Tacoma, Washington. Law Enforcement and Violence: The Divide between Black and White Americans Issue Brief. The difficult relationship between the police and blacks in the United States is evident in the deep-rooted racial divisions in the public’s view of law enforcement and the criminal justice system. 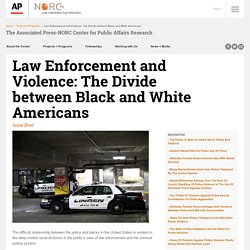 But the latest Associated Press-NORC Center for Public Affairs Research poll also finds agreement across racial groups on many of the causes of police violence and further consensus that a number of changes in policies and procedures could be effective in reducing tensions between minorities and police and limiting violence against civilians. The nationwide poll was collected July 17 to 19, 2015 using the AmeriSpeak Omnibus, the probability-based panel of NORC at the University of Chicago. Online and telephone interviews using landlines and cell phones were conducted with 1,223 adults, including 311 blacks who were sampled at a higher rate than their proportion of the population for reasons of analysis.

The Next Civil Rights Movement? The Next Civil Rights Movement? Black Lives Matter at the Conventions - The Atlantic. Political conventions have always attracted political protests, and the history of black organizers protesting at major party conventions stretches back decades. Mass protests led by the Mississippi Freedom Democratic Party, then-Student Nonviolent Coordinating Committee leader and current Representative John Lewis, and activist Fannie Lou Hamer at the 1964 Democratic Convention helped bring the Voting Rights Act of 1965 into existence and hasten the exit of white conservatives from the Democratic Party. The 1968 Democratic Convention was upended by mass protests and riots from a collection of counterculture and civil rights groups, including anti-war demonstrators, black nationalists, and the nonviolent remnants of Martin Luther King Jr.’s Poor People’s Campaign.

The surveillance, protests, and a political plot at this convention captured the fraught racial climate of the United States in the wake of King’s death and the ensuing riots. Black Lives Matter at the Conventions - The Atlantic. 2016 presidential candidates on the Black Lives Matter movement - Ballotpedia. 2. Racial Discrimination a. The development of the United States has been marked by conflict over questions of race. Our nation was formed only after Native Americans were displaced. Popular toy manufacturer brings out first African-American doll celebrating diversity, strength. When it comes to choosing a gift for kids, parents and elderly often wonder what might be a suitable and appropriate present.

From birthdays to New Year gifts-books, toys, and games that dominate our choices have often layered problems that often go unnoticed. For instance, when you decide to gift your little girl a doll, invariably the first option that comes to your mind is a Barbie. And debates surrounding the dolls are endless and cannot be ignored. 15 Fashion Ads That Celebrate Diversity. When thinking about the wide world of fashion, do the words diverse, all-inclusive and multicultural come to mind? Didn’t think so. You’d be more successful at guessing the correct Powerball numbers than pointing out a black or plus-sized woman on the runway. Just saying. Some brands have put their marketing teams to work, and have come up with unique and progressive ads that give the less represented some shine (and ahem, fashion brands, the more representative your ads are, the more your sales will increase.)Diversity isn’t always black and white, it’s the ability to be inclusive of all people no matter the differences between them (how’s that for a bumper sticker?)

Here are 15 fashion ads that celebrate diversity and promote inclusiveness. ‘You can’t sprinkle diversity onto companies’: How both brands and agencies can better respond to issues of race and culture. “Diversity” has been one of the industry's buzziest words over the past year, and for good reason: research like the 3% Conference’s ‘Elephant on Madison Avenue’ survey shows that women are often subject to harassment and bias within the industry, with former Saatchi chairman Kevin Roberts’ recent comments about gender being among the most highly-publicized examples of how women are treated unfairly in the ad world.

The volume of the diversity conversation within the industry, especially over the past year, seems to be the loudest from a gender perspective. But the fact of the matter is that people of color have been subjected to unfair treatment over the years as well. The agency approach While some think this is a step in the right direction, others believe that the expertise that multicultural agencies can provide is still valued and needed. Brands and #BlackLivesMatter. Brands Actually Recognizing Diversity - FleishmanHillard. Brands Lean in to Diversity. Brands Lean in to Diversity. Black Consumers Still Set Trends and Dictate Popular Culture. 2016 Nielsen Report: Black Buying Power Has Reached Tipping Point, But How Will Black America Leverage it to Create Wealth?