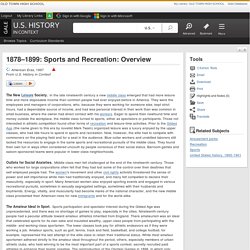 In the late nineteenth century a new middle class emerged that had more leisure time and more disposable income than common people had ever enjoyed before in America. They were the employees and managers of corporations, who, because they were working for someone else, kept strict hours, had a dependable source of income, and had less personal interest in their work than was common in small business, where the owner had direct contact with his workers. Eager to spend their newfound time and money outside the workplace, the middle class turned to sports, either as spectators or participants. Those not interested in athletic competition found other forms of recreation and leisure-time activities. Prior to the Gilded Age (the name given to this era by novelist Mark Twain) organized leisure was a luxury enjoyed by the upper classes, who had idle hours to spend in sports and recreation. Outlets for Social Anxieties. 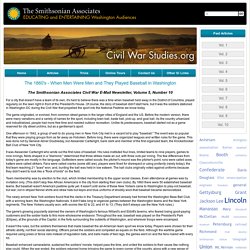 Of course, the story of baseball didn't start here, but it was the soldiers stationed in Washington DC during the Civil War that propelled the sport into the National Pastime we know today. The game originated, or evolved, from common street games in the larger cities of England and the US. Before the modern version, there were many variations and a variety of names for the sport, including town ball, baste ball, pick-up, and goal ball. One afternoon in 1842, a group of well to do young men in New York City met in a vacant lot to play "baseball. " It was Alexander Cartwright who wrote out the first rules of baseball. Pennsylvania Civil War Trails. Depending on who you talk to, Abner Doubleday did or didn’t invent baseball in 1839. 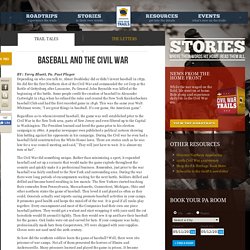 He did fire the first Northern shot of the Civil War and commanded the 1st Corp at the Battle of Gettysburg after Lancaster, Pa General John Reynolds was killed at the beginning of the battle. Some people credit the creation of baseball to Alexander Cartwright in 1845 when he refined the rules and created the New York Knickerbockers baseball Club and had the first recorded game in 1846. This was the same year Walt Whitman wrote, “I see great things in baseball. It’s our game, the American game”. Regardless as to whom invented baseball, the game was well established prior to the Civil War in the New York area, parts of New Jersey and even filtered up to the Capital in Washington.

The Civil War did something unique. So how did the southern soldiers learn the game of baseball? Pastimes of the 1860?s. Résultats Google Recherche d'images correspondant à.