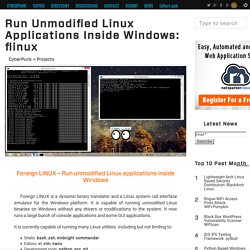 It is capable of running unmodified Linux binaries on Windows without any drivers or modifications to the system. It now runs a large bunch of console applications and some GUI applications. It is currently capable of running many Linux utilities. Including but not limiting to: Open Source. S BootCD 15.2 - All in one Bootable CD. Antivirus Tools Avira AntiVir Personal Free anti-virus and anti-spyware on-demand scanner, detects and removes more than 50000 viruses and trojans. 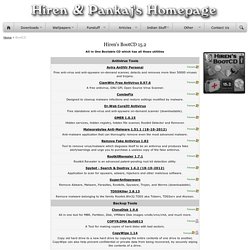 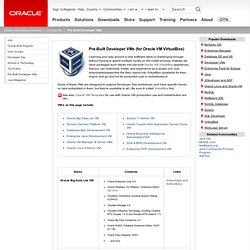 Instead, we have packaged such stacks into pre-built Oracle VM VirtualBox appliances that you can download, install, and experience as a single unit. Just downloaded/assemble the files, import into VirtualBox (available for free), import, and go (but not for production use or redistribution)! Some of these VMs are designed to support Developer Day workshops, and have specific hands on labs embedded in them, but they're available to all.) Be sure to install VirtualBox first. VM's on this page include: Yeoman - Modern workflows for modern webapps. Whonix / _ / Comparison with Others. Set Up a Fully Automated Media Center.

QVIVO. Share Your Life Without Limits. BumpTop Beta in Action. ActionBarSherlock - Home. Create a Kickass, Seamless, Play-Everything Media Center: The Complete Guide. I really want to love XBMC, and maybe you guys can help me out. Here is my situation: -I rip all my DVDs & Blu Rays to my Media Center. -My wife and daughter watch a ton of shows on Netflix.

-I use a wireless XBox 360 controller on my Media Center to play games. First off, I feel like XBMC Flicks has been hit and miss. For example, I just installed XBMC on my desktop to see how XBMC Flicks is working out. Also, I'd love to add Netflix (XBMC Flicks) to the main menu in XBMC, instead of having it be an obscure item in the video add-ons. My Current solution is functional: -I run Windows Media Center as my main interface, and customize it with Media Center Studio (which I had to patch to restore full functionality).

-All movies and tv shows are listed in the default Video Library section in Windows Media Center -I added a "Games" section that lists all the XBox 360 controller compatible games I have installed on the system (plus a few extras that launch joy2key to run as well) Discover how to build an app with these easy-to-follow tutorials. The Ultimate Start to Finish Guide to Your XBMC Media Center. Getting To Know The Android Platform: Building, Testing And Distributing Apps. When iOS started to gain momentum, soon after the first iPhone launched, many businesses started to pay attention to apps. 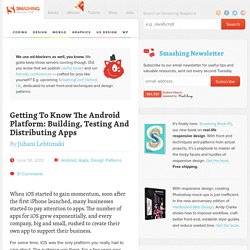 The number of apps for iOS grew exponentially, and every company, big and small, rushed to create their own app to support their business. For some time, iOS was the only platform you really had to care about. The audience was there. For a few years now, there has been another player in the market. Android’s marketshare growth has been phenomenal, and it simply cannot be ignored anymore. Android as a platform can appear intimidating to new players. In this article, we’ll explain parts of the application-building process and ecosystem for Android that could cause problems if misunderstood. Make The App Scalable Link Android devices come in many forms and sizes. 1Large preview2.