Water and drinks. It's easy to overlook, but choosing healthier drinks is a key part of getting a balanced diet. 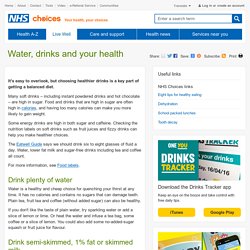 Many soft drinks – including instant powdered drinks and hot chocolate – are high in sugar. Food and drinks that are high in sugar are often high in calories, and having too many calories can make you more likely to gain weight. Some energy drinks are high in both sugar and caffeine. Checking the nutrition labels on soft drinks such as fruit juices and fizzy drinks can help you make healthier choices. How soft drinks impact your health. Diet debate: Are diet drinks a no-go? Image copyright Thinkstock It's rare in life to have your cake and eat it. 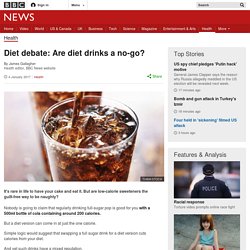 But are low-calorie sweeteners the guilt-free way to be naughty? Nobody is going to claim that regularly drinking full-sugar pop is good for you with a 500ml bottle of cola containing around 200 calories. But a diet version can come in at just the one calorie. Simple logic would suggest that swapping a full sugar drink for a diet version cuts calories from your diet. Fizzy drinks 'damage bones' Drinking too many fizzy drinks can weaken your bones and put you at risk of fractures, warn scientists. 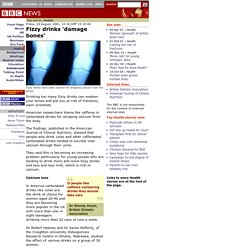 American researchers blame the caffeine in carbonated drinks for stripping calcium from the body. The findings, published in the American Journal of Clinical Nutrition, showed that people who drink colas and other caffeinated carbonated drinks tended to excrete vital calcium through their urine. They said this is becoming an increasing problem particularly for young people who are tending to drink more and more fizzy drinks and less and less milk, which is rich in calcium. Sports Drinks vs. Water: When It’s Best To Use Each. Most runners have repeatedly heard that advice that the must drink fluids as the summer months approach or when heat waves strike. 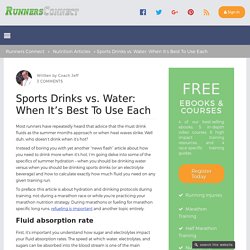 Well duh, who doesn’t drink when it’s hot? Instead of boring you with yet another “news flash” article about how you need to drink more when it’s hot, I’m going delve into some of the specifics of summer hydration – when you should be drinking water versus when you should be drinking sports drinks (or an electrolyte beverage) and how to calculate exactly how much fluid you need on any given training run. To preface, this article is about hydration and drinking protocols during training, not during a marathon race or while you’re practicing your marathon nutrition strategy. During marathons or fueling for marathon specific long runs, refueling is important and another topic entirely. Fluid absorption rate. More than two sugary drinks a day greatly increases diabetes risk, study shows. Drinking more than two sugary or artificially sweetened soft drinks a day greatly increases the risk of diabetes, research has shown. 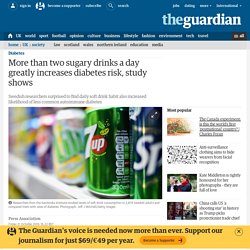 The Swedish study found that consuming more than two 200ml drinks more than doubled the chances of developing type 2 diabetes. A serious soft drink habit consisting of at least five drinks daily boosted the likelihood of having the disease more than 10 times. Soft drinks also increased the risk of a less common condition called latent autoimmune diabetes in adults (Lada), which shares characteristics of both type 1 and type 2 diabetes. Bathtub of sugary drinks a year: cancer warning over teenage intake. British teenagers drink almost a bathtub full of sugary drinks each year, Cancer Research UK has said, urging the government to do more to improve children’s diets. 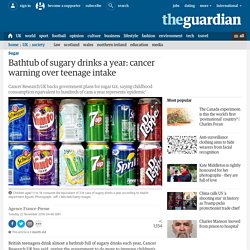 Children aged 11 to 18 consumed on average 234 cans of sugar-sweetened soft drinks each year, CRUK said. It amounts to almost a bath full and is more than double the figure for children aged between four and 10, whose average annual intake is 110 cans. Tooth decay & sugary drinks. Main Menu Tooth decay How tooth damage occurs Tooth decay is caused by bacteria in the mouth using sugar from foods and drinks to produce acids that dissolve and damage the teeth. 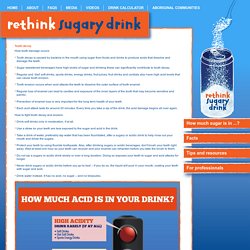 Sugar sweetened beverages have high levels of sugar and drinking these can significantly contribute to tooth decay. Regular and ‘diet' soft drinks, sports drinks, energy drinks, fruit juices, fruit drinks and cordials also have high acid levels that can cause tooth erosion. 8 Healthy Drinks. When you think of good-for-you beverages, water immediately comes to mind, but there are others worth adding to your diet. 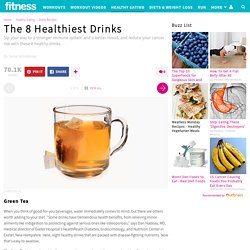 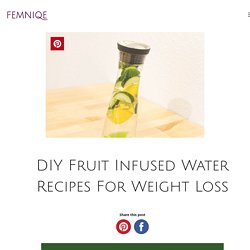 In this post you’re going to discover how you can make your own healthy flavored water easily and quickly. By now you should know that drinking soft drinks or soda is one of the most dangerous things you can do to your body. Remember, they have a lot of sugar aspartame that can really take a negative toll on your body. When you drink soda, you’re basically setting up yourself to gain unwanted weight and it will cause you to crave for more sugary products. Healthy Recipes. Recipes and cooking tips. Easy, healthy recipes.