Is not available. Aquaponic - A Modern Farming System. Aquaponic fish. 1_Aquaponics_Fish_Tank_flat. Aquaponics. JAN 2012 Aquaponics disaster and update After starting the Aquaponics in Sept 2011 the plants grew fantastic before a really bad Aphid attack took over. 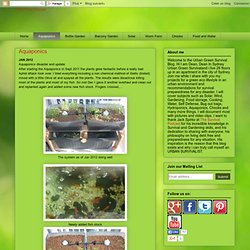 I tried everything including a non chemical method of Garlic (boiled) mixed with a little Olive oil and spayed all the plants. The results were disastrous killing most of the plants and most of my fish. So mid Dec I gave it another overhaul and clean out and replanted again and added some new fish stock. Fingers crossed.... The system as of Jan 2012 doing well Newly added fish stock Replanted System in Dec 2011 Dec 2011 just before it all collapsed System planted Sept 2011 Cool Time Capture video AUG 2011 Time for an update and major makeover of the aquaponics system.

Then its time for some new plants for the summer season I think I will will go for 1 in each container of Cherry Tomato, Parsley, Coriander (cilantro), Zucchini, Lettuce. A clogged up system all washed and ready to go again This is all the plumbing I needed! Looking down from above. Get to know Aquaponics - Backyard Aquaponics. Aquaponics Is Growing Farms in the Most Unlikely Places. Aquaponic farm at University of Hawaii, via Kanu Hawaii/Flickr The world is growing and growing ever more hungry, and there isn’t a single, perfect way to get more food. 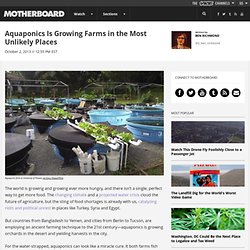 The changing climate and a projected water crisis cloud the future of agriculture, but the sting of food shortages is already with us, catalyzing riots and political unrest in places like Turkey, Syria and Egypt. But countries from Bangladesh to Yemen, and cities from Berlin to Tucson, are employing an ancient farming technique to the 21st century—aquaponics is growing orchards in the desert and yielding harvests in the city. For the water-strapped, aquaponics can look like a miracle cure. It both farms fish and grows plants using the same closed-loop, freshwater system, using just a tenth of the water that traditional agriculture requires.

"As the price of water soars, as the price of petrol soars, and when the subsidies on farming disappear, this model makes sense," Farrag told Al Jazeera. DWC Hydroponics. In this instructable video I will go over my "Deep Water Culture" hydroponic system and show how I modified the process to deal with all stages of plant growth including seed starting. 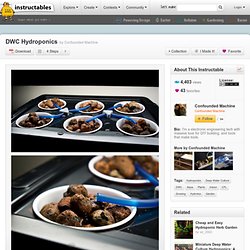 DWC hydroponics is a very efficient system while being extremely beginner friendly. Parts cost is quite low and the system easily scales in size. This is a very basic overview of DWC hydroponics but is a system that can easily be expanded or reduced to suit your growing needs. Personally I wanted a system that would provide fresh greens all winter long while requiring very little human intervention. As it currently stands this system has fully automatic lighting and irrigation (mechanical timer based), the only aspect I need to be involved with is the initial seed planting and water changes. In the video below I will go thru all aspects of my system which should answer all of the major questions regarding DWC hydroponic growing. Enjoy, and many thanks! How to Build a Home Hydroponics System. Hydroponic Drip Garden for Vegetables, Herbs or Flowers. Here are the items you will need:1 - 27 gallon heavy duty plastic storage box with recessed plastic lid10' of 1/2" PVC pipe5 - 90 deg PVC elbows3 - PVC T connectors1 - 3/4" to 1/2" PVC reducer1 - 3/4" PCV pipe to 3/4" Male Thread connector4 - 1/2" PVC J-Hook Hangers1 - Male Quick Disconnect to male 3/4" hose thread1 - Female Quick Disconnect to female 3/4" hose thread1 - 1/2" hose barb to female 3/4" hose thread 1 - rubber washer with filter screen3' of 1/2" flexible rubber hose1 - Active Aqua PU160 water pump12' 1/4' O.D. drip line hose12 - Drip stakes or drip nozzles with tie down stakes12 - Square Plastic pots sized to fit 3 across top of tote lid1 - 24 Hr timer with 15 minute on/off timing intervals The first 11 items on the list were all purchased from Home Depot and can be picked up at most hardware stores. 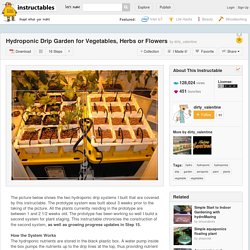