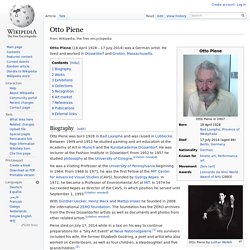 He lived and worked in Düsseldorf and Groton, Massachusetts. Biography[edit] Otto Piene was born 1928 in Bad Laasphe and was raised in Lübbecke. Between 1949 and 1953 he studied painting and art education at the Academy of Art in Munich and the Kunstakademie Düsseldorf. He was lecturer at the Fashion Institute in Düsseldorf. He was a Visiting Professor at the University of Pennsylvania beginning in 1964. With Günther Uecker, Heinz Mack and Mattijs Visser he founded in 2008 the international ZERO foundation. Piene died on July 17, 2014 while in a taxi on his way to continue preparations for a "Sky Art Event" at Neue Nationalgalerie.[1] His survivors included his wife, the former Elizabeth Goldring, a poet and artist who also worked on Centerbeam, as well as four children, a stepdaughter and five grandchildren.[2] Works[edit] Exhibitions[edit] Piene had his first solo exhibition at Galerie Schmela, Düsseldorf, in 1959.

Dan Flavin. Selected Exhibition History This selection of exhibitions lists only those that Dan Flavin or the Estate of Dan Flavin was involved in as installer, lender, or consultant. 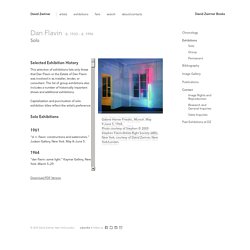 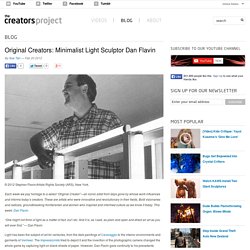 Each week we pay homage to a select “Original Creator”—an iconic artist from days gone by whose work influences and informs today’s creators. These are artists who were innovative and revolutionary in their fields. Bold visionaries and radicals, groundbreaking frontiersmen and women who inspired and informed culture as we know it today. This week: Dan Flavin. “One might not think of light as a matter of fact, but I do. Light has been the subject of art for centuries, from the dark paintings of Caravaggio to the interior environments and garments of Vermeer. Light-Space Modulator. Three moveable metal and/or glass structures arranged on a rotating disc form the core of the Light-Space Modulator. 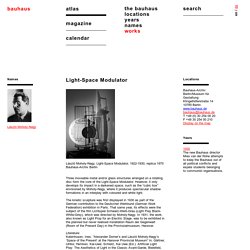 However, it only develops its impact in a darkened space, such as the “cubic box” envisioned by Moholy-Nagy, where it produces spectacular shadow formations in an interplay with coloured and white light. The kinetic sculpture was first displayed in 1930 as part of the German contribution to the Deutscher Werkbund (German Work Federation) exhibition in Paris. That same year, its effects were the subject of the film Lichtspiel Schwarz-Weiß-Grau (Light Play Black-White-Grey), which was directed by Moholy-Nagy. In 1931, the work, also known as Light Prop for an Electric Stage, was to be exhibited in the planned but never realised installation Raum der Gegenwart (Room of the Present Day) in the Provinzialmuseum, Hanover. Untitled. Jacopo Foggini. Esther Ruiz. Cambridge based glass and light artist – Chris Wood. Cambridge based glass and light artist – Chris Wood. 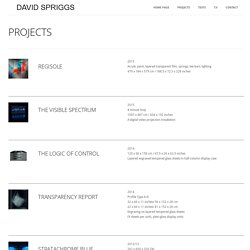 Avignon Locators 2012. Chul-Hyun Ahn - 83 Artworks, Bio & Shows on Artsy. Julius. Liz West. Hitoshi Kuriyama. Horizon is an Imaginary Line. Horizon is an Imaginary Line is an experimental light and electroacoustic installation that innovates the use of a moving image projected through haze in purpose of creating tangible sensation of light and transforming the perception of space into a poetic experience of nature. 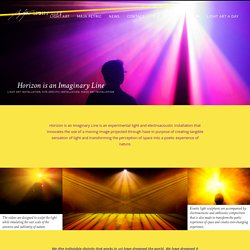 The videos are designed to sculpt the light while emulating the vast scale of the universe and sublimity of nature. Kinetic light sculptures are accompanied by electroacoustic and ambisonic composition that is also made to transform the poetic experience of space and creates ever-changing experience. We (the indivisible divinity that works in us) have dreamed the world. We have dreamed it resistant, mysterious, visible, ubiquitous in space and firm in time, but we have allowed slight, and eternal, bits of the irrational to form part of its architecture so as to know that it is false. Excerpted from the essay Avatars of the Tortoise by Jorge Luis Borges, 1964. Eulalia valldosera. Soto : Obra