Yes, that’s a Tampon in my mouth : The Swiss Army Survival Tampon : 7 Survival Uses – Do me a favor for the next 5 minutes. 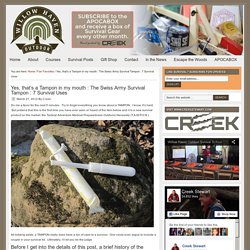 Try to forget everything you know about a TAMPON. I know, it’s hard. But pretend that this is the first time you have ever seen or heard of the item below and it is a new survival product on the market: the Tactical Adventure Medical Preparedness Outdoors Necessity (T.A.M.P.O.N.) All kidding aside, a TAMPON really does have a ton of uses to a survivor. One could even argue to include a couple in your survival kit. The tampon is actually regulated in the US by the Food & Drug Administration as a Class II Medical Device. I’ve high-lighted a few survival uses below: Earthship Living in a Cold Desolate Canadian Winter. The Off Grid Battery That Runs On Air! MetAir® Ranger Off-Grid, Emergency Back-Up Power System. Off-Grid, Emergency Back-Up Power – Day or Night The MetAir® Ranger is a lightweight “personal portable power system” comprised of eco-friendly zinc-air battery cells. 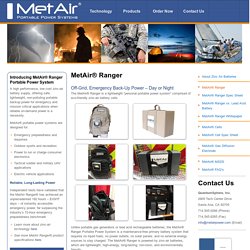 When you are packing your bug out bag or putting supplies on the shelf, lack of space can be a serious problem. 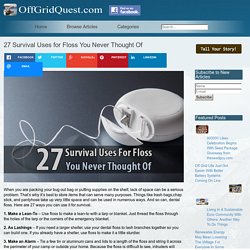 That’s why it’s best to store items that can serve many purposes. Things like trash bags,chap stick, and pantyhose take up very little space and can be used in numerous ways. And so can, dental floss. Here are 27 ways you can use it for survival. 1. 2. 3. 4. 5. 6. 7. 8. 9. 10. 11. 12. 13. 14. 15. A homemade mosquito trap that really works! The mosquitoes can fly right back out through the small bottle top opening that they came in through, except few ever get back to the small opening once they are inside; once inside and find nothing to land on, their inclination is to fly elsewhere, and most likely they will fly towards the outside wall, then encountering a solid surface they usually work their way up into the crevice where the inverted top seals with the bottle. 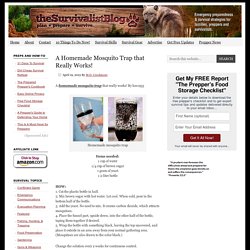 They will fly around in different areas, but few ever get back aligned with the small opening they came in initially, then continue up and out of the bottle. Besides, they are still (supposedly) drawn toward the CO2 the yeast is producing, which leads them down into the funnel area, and back into the same trap. The theory is that eventually, the trapped insects die and fall into the sugar-water-yeast. The fly traps sold in stores (mentioned in other posts) work on the same trapping principle, that the opening is lower than the crevices around the sides. Tono Mirai’s “Earth Houses”: Contemporary Homes Made from The Earth. Posted by Kai Mitsushio | 16 Jul 2013 | Comments (0) nest / Kanda SU (1999-2004) They say your home is your “third skin,” after your clothes and your actual skin. 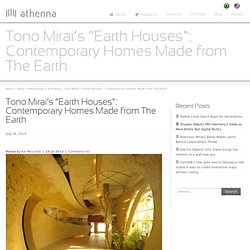 Our second and third “skins,” just like our actual skin, have a significant effect on our lives. If your clothes are wet, or aren’t warm enough, you might catch a cold. If your house is designed and built without natural, eco-friendly materials… well, you may not catch a cold, but the space you live in, its materials, its design, surely has an affect on your well being. Eco-Dome. CalEarth’s Eco-Dome can be built out of nothing more than dirt, barbed wire, and the same kind of polyethylene bags used to make sandbags to contain floods. 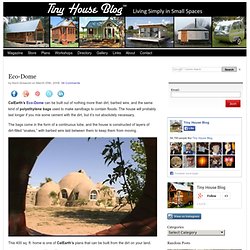 The house will probably last longer if you mix some cement with the dirt, but it’s not absolutely necessary. The bags come in the form of a continuous tube, and the house is constructed of layers of dirt-filled “snakes,” with barbed wire laid between them to keep them from moving. This 400 sq. ft. home is one of CalEarth’s plans that can be built from the dirt on your land. It’s 21st-century adobe: faster and easier than traditional adobe construction, because you don’t have to make and dry individual bricks. This construction technique can be learned quickly by anyone, and is about the cheapest possible way to build lasting shelter. Postcard From Eastern Oregon: When Planting Food Is Illegal, By Kollibri terre Sonnenblume « Speaking Truth to Power. This Spring my farming partners and I found ourselves landless. 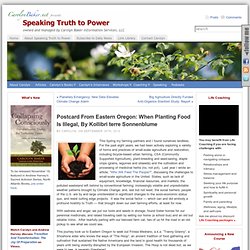 For the past eight years, we had been actively exploring a variety of forms and practices of small-scale agriculture and restoration, including bicycle-based urban farming, CSA (Community Supported Agriculture), plant-breeding and seed-saving, staple crops (grains, legumes and oilseeds) and the cultivation and processing of medicinal herbs (no, not pot). Last year I wrote an article, “Who Will Feed The People? “, discussing the challenges to small-scale agriculture in the United States, such as lack of equipment, knowledge, financial resources, and markets; the polluted wasteland left behind by conventional farming; increasingly volatile and unpredictable weather patterns brought by Climate Change; and, last but not least, the social barriers: people of the U.S. are by and large uninterested in significant changes to the socio-economic status quo, and resist cutting edge projects.

How to Build Your Own Outdoor Mud Oven. By Gaye Levy. 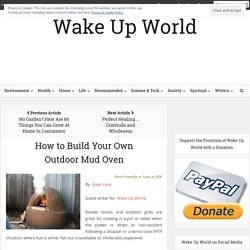 10 Reasons to Become Self-Sufficient & 10 Ways to Get There. By Michael Edwards and Jeffrey Green Activist Post We are now three to five generations removed from the rural backbone that strengthened America. 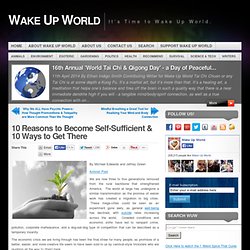 The world at large has undergone a similar transformation as the promise of easier work has created a migration to big cities. Facebook. 10 Reasons to Become Self-Sufficient & 10 Ways to Get There.