Remote Expert Testimony in Family Courts. Support for Separated Families. The Family Solutions Group – a multi-disciplinary group with broad and deep expertise in working with separated families in and out of court – have released a report entitled, ‘What about me? 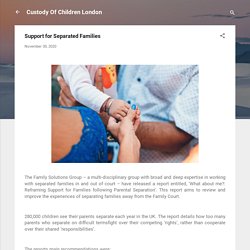 : Reframing Support for Families following Parental Separation’. This report aims to review and improve the experiences of separating families away from the Family Court. 280,000 children see their parents separate each year in the UK. The report details how too many parents who separate on difficult termsfight over their competing ‘rights’, rather than cooperate over their shared ‘responsibilities’. Economic Abuse. Following the Domestic Abuse Bill, the definition of domestic abuse has extended to economic abuse too. 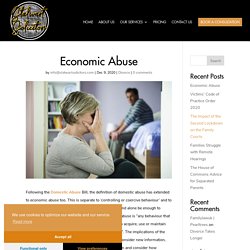 This is separate to ‘controlling or coercive behaviour’ and to ‘psychological, emotional or other abuse’ and could stand alone be enough to amount to domestic abuse. The definition of domestic abuse is “any behaviour that has a substantial adverse effect on the victim’s ability to acquire, use or maintain money or other property or to obtain goods or services”. The implications of the new addition would mean that lawyers would have to consider new information, make further applications for the protection of the victim and consider how economic abuse may affect the outcome of financial remedy proceedings.

What are the signs of economic abuse? This is a non-exhaustive list of signs: Victims’ Code of Practice Order 2020. The Revised Code of Practice for Victims of Crime will come into operation on 1stApril 2021.The code will set out the services to be provided to victims of crime by relevant service providers. 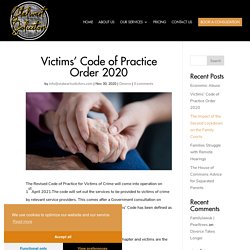 This comes after a Government consultation on Improving the Victims’ Code.The structure of the Victims’ Code has been defined as 12 rights that are easy for victims to understand. The key changes in the revised Victims’ Code are: Accessibility: The revised Code is simplified into one-chapter and victims are the primary audience. Improved engagement: The frequency and method of communication is more victim led. Domestic Abuse of Men during the Virus. Respect Men's Advice Line reported to have seen an increase in contact via email by 96% with reports of abuse suffered by men during the pandemic from April to June.The virus has certainly acted as a catalyst for men in asking for help, but there are concerns if the help they are receiving is adequate. 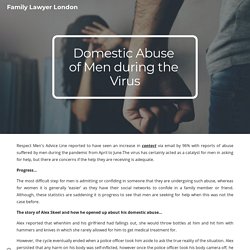 Progress… The most difficult step for men is admitting or confiding in someone that they are undergoing such abuse, whereas for women it is generally ‘easier’ as they have their social networks to confide in a family member or friend. Although, these statistics are saddening it is progress to see that men are seeking for help when this was not the case before. The Impact of the Second Lockdown on the Family Courts. The Lord Chief Justice and Senior President of Tribunals issued a message of support and encouragement on November1st2020, in light of the government’s announcement of a second nationwide lock down commencing on Thursday 5th of November 2020.Due to the essential nature of the courts and tribunals their work will be exempt from the lockdown measures. 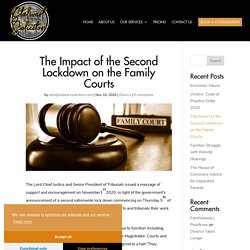 The message stated, “courts and tribunals could continue to function including, after a short pause, by carrying on with trials in both the Magistrates’ Courts and the Crown Court. In none of our jurisdictions did work grind to a halt.”They described the legal profession, the parties, jurors, witnesses, judges, magistrates and court staff as key workers, vital to the continued running of the courts and tribunals in this proposed period of renewed significant restrictions.

We’re here for you, whatever your situation. Start the process of making life better today by booking your free telephone consultation to see how we can help. Families Struggle with Remote Hearings. The president of the Family Division Sir Andrew McFarlane ordered a report to be conducted by Nuffield Justice Observatory into the use of remote hearings in family courts. 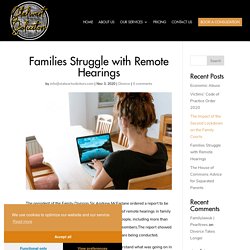 The research drew on a survey of over 1,300 people, including more than 1,100 legal professionals and 132 parents and family members.The report showed many families are discontent with how remote hearing are being conducted. The report revealed four out of 10 parents did not understand what was going on in virtual family court hearings.

Many also struggled joining online proceedings from home due to a lack of often adequate technology or support. Most parents joined by phone rather than video link, as a result those who needed an interpreter or who had disabilities faced particularly severe challenges. Government Funding for the Domestic Abuse Bill. The Government has announced plans to provide £6 million in funding to aid councils in their preparation for the introduction of the Domestic Abuse Bill. 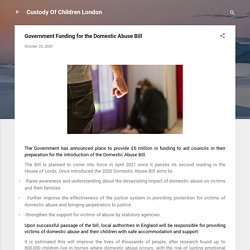 The Bill is planned to come into force in April 2021 once it passes its second reading in the House of Lords. Once introduced the 2020 Domestic Abuse Bill aims to: · • Raise awareness and understanding about the devastating impact of domestic abuse on victims and their families. The House of Commons Advice for Separated Parents. On October15th 2020, The House of Commons Library published a paper providing advice and answers to key questions advising parents and guardians on maintenance arrangements and access to children. 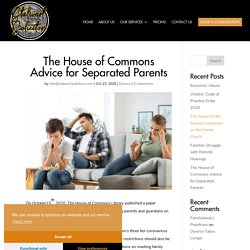 In line with the recent introduction of the United Kingdom’s three tier coronavirus restriction measures the paper’s main message is, local restrictions should also be consulted. Mediation Information and Assessment Meetings (MIAMs) decrease. A recent report published by the Ministry of Justice has highlighted a significant decline in the number of Mediation Information and Assessment Meetings (MIAMs). 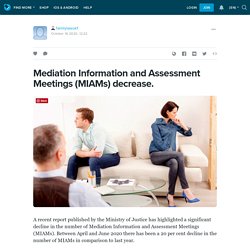 Between April and June 2020 there has been a 20 per cent decline in the number of MIAMs in comparison to last year. A MIAM is a first meeting with a mediator that covers how mediation works and whether mediation is suited for the client, it can only be conducted by Family Council Accredited mediators (FMCA). The meeting can occur with or without one’s partner, usually last 45 minutes and takes place at the mediator’s office or in some cases via video call and even through WhatsApp.

As of 22nd April 2014, the majority of divorcing couples in England and Wales are required to attend a MIAM session before using the court process to resolve issues surrounding children, money and assets. Mediation starts have decreased by 31 per cent and outcomes have decreased by 21 per cent in comparison to last year. United Kingdom Joins the 2007 Child Support Convention.

From January 1st 2021, when the United Kingdom’s (UK) transition period from the European Union (EU) ends, the UK will adopt the 2007 Hague Convention on the International Recovery of Child Support and Other Forms of Family Maintenance ( 2007 Child Support Convention). 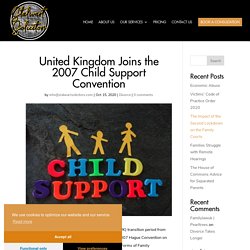 The UK is currently bound by the 2007 Child Support Convention by virtue of the approval of the European Union as are 40 States including European Union members, with the exception of Denmark. Overpriced Divorce Advice. The section of the report on divorce focused on, the price changes for advice, price transparency, quality of advice and online services. Overall the lowest cost for advisory services were approximately £350 and the most expensive was £10,050.

The average price for divorce services have increased significantly since 2015 but, it was found remote and face to face service were delivered at the same cost. When comparing regional price differences, legal advice was 20 per cent cheaper in the North of England and Wales in comparison to London, wherefirms charged 33 per cent more than firms based elsewhere. Firms that provide fees on their websites were rated with higher levels of transparency and fewer unanticipated costs. Bored and Broken Children. Following the March 2020 lockdown there was a significant increase in homelessness due to the rise in redundancy and cuts in Universal Credit which meant that families were evicted from their homes and forced to stay in B&B’s. Reports show that up to 1,100 families may have spent part of lockdown in B&Bs exceeding the lawful 6 week limit, forcing them to relocate from hotel to hotel. The Conditions According to the Children Commissioner’s report the B&B’s would be extremely cramped in which children would have to do their school work and spend most of their days.

There were some instances where children would have to be loaned laptops from their schools, however due to their stay at the B&B this meant extra expenses on top for parents to utilise the premises’ Wi-Fi. Not only was school work effected, but they would encounter anti-social, threatening people within the premises such as drunk residents or be subjected to a domestic violence situation. Family Law North London. Family Law without the EU. The EU Withdrawal Agreement (WA) sets out the terms of the United Kingdom’s (UK) exit from the European Union (EU). This document is extremely important for the future of family law and family law practitioners as the UK’s exit from the EU nears. A book is scheduled to be published this month by LEXIS-NEXIS titled, ‘Family Law Firm the EU: a summary guide for practitioners’ to help provide guidance on family law. Divorce Takes Longer.

What has happened? The time taken for paper-based divorces to be processed in the UK has increased significantly in comparison to last year. What does this mean? On averagein 2020 a paper-based divorce took 66.5 weeks to finalize, this is a 7 week increase in comparison to 2019, during which paper-based divorces took 59.6 weeks to process. Weddings Reformedfor All. The Law Commission has launched a consultation into England and Wales marriage laws, after labelling the current laws that regulate how and where couples marry as unsuitable for modern times. The intention of the Law Commission’s proposals is to bring marriage laws formed in 1836 into the 21 century and allow couples greater freedom over where and how they get married. At present marriage laws state: Marriages must take form in a civil or a religious ceremony, with no option for a ceremony reflecting other beliefs.To be legally married weddings have to take place in a registered building –place of worship or a licensed secular venue.

Cohabitation Agreements Are On The Rise. According to research conducted by Direct Line life insurance, 75% of the family lawyers surveyed have received growing number of couples seeking advice on forming a cohabitation agreement. A Cohabitation Agreement is, a legal agreement signed by partnerswho live together but, are not married or in a civil partnership, it usually relates to financial arrangements.The contracts like pre and post nuptial agreements are not legally binding but, if legal proceedings are required upon separating cohabitation agreements can reduce costs, timeand emotional distress. The growing importance of post-nuptial agreements. What has happened? During the era of COVID-19 life is full of uncertainty as a result, for many married couple’s post-nuptial agreements are becoming more important than ever. Less Victim Protection. The implications of Depp v Heard. After many years of being accused of being an abuser, by popular opinion (considering overwhelming evidence presented in court) Johnny Depp was the true victim of his ex-wife Amber Heard.

Divorce on Pause. What has happened? Child Support Debt Scrapped. Maltreatment of Children: Product of Covid-19. Court Fees Order 2020. What happened? As of August 3rd,The Court Fees (Miscellaneous Amendments) Order 2020, will be introduced reducing numerous fee orders, primarily the Family Proceedings Fees Order 2008. These fee reductions will apply to England and Wales. Villiers v Villiers- ‘Victory for Villains?’ When going through a divorce, one of the most challenging areas is agreeing on finances and maintenance. This is what often causes a row and animosity during divorce, the husband may argue that he worked through out the marriage and provided, therefore should have the most maintenance. However, the wife may argue that she had to stop working to raise their children therefore should be entitled to more maintenance.

What is maintenance? There are two types of maintenance: spousal and child maintenance. Family Lawyers London. Children, Custody and COVID-19. What is happening? Michael Gove announced on March 24th, “children who are under 18 can move between separated parents.” Best Divorce Lawyer in North London and Hertfordshire. Family Law Firm Expats. Best Divorce Law Firms.