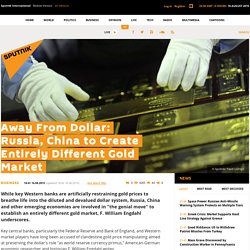 First Germany, then the Netherlands, perhaps Switzerland this weekend, and now the French right-wing Front National, which shockingly came first in May's European parliament elections, and whose leader Marine Le Pen is currently polling in first place in a hypothetical presidential election (in both a first and run off round), ahead of president Hollande, has sent a letter to the governor of the French Central Bank, the Banque de France, demanding that France join the list of nations which have repatriated, or at least tried to, their gold. 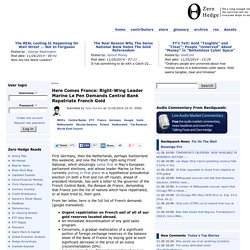 From her letter, here is the full list of French demands (google translated): Her full letter below (link) Mr. Christian Noyer Governor of the Banque de France 31 rue Croix des Petits-Champs 75049 PARIS Cedex 01 Nanterre, November 24, 2014. Alan Greenspan talks GOLD (UNCUT VERSION) Largest bank China (ICBC) admits: ‘A new global currency setup is being conceived.’ In Gold We Trust sur Twitter : "#Scotiabank finally understands what I’ve been saying for a year re Chinese #gold demand :)... The Financial Repression Authority. Financial Repression describes an economic policy in which capital controls and regulations are implemented by governments and central banks, the aim of which is to reduce public debt burdens through the distortion of financial market pricing. 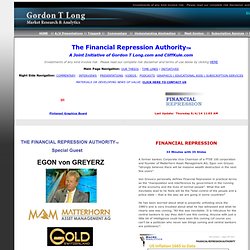 "When things get bad enough, governments will do anything. " – Jim Rickards "People ask if we'll have a 'bail-in' in the United States .. Given ATM limits, foreign wire limits and Federal Reserve exit fees on bond funds, I'd say it's already here. " - Jim Rickards Financial Repression always means a combination of measures that lead to a notable narrowing of the investment universe for investors. Money is thus channeled into specific directions to create a ‘home bias. The next bailout will be the U.S. government. "We’re going to take your pension plan and give you government bonds so that you have a guaranteed return .. THE BUYBACK TAX RUSE Its a Free Tax Ride for Corporations - 07 July 2014 Financial Repression Goes Global - 05 June 2014. 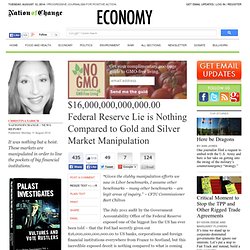 " ~ CFTC Commissioner Bart Chilton The July 2011 audit by the Government Accountability Office of the Federal Reserve exposed one of the biggest lies the US has ever been told – that the Fed had secretly given out $16,000,000,000,000.00 to US banks, corporations and foreign financial institutions everywhere from France to Scotland, but this incredible exposed deceit is nothing compared to what is coming out now about the manipulation of gold and precious metal markets. The prevarications of cabalistic bankers and their puppeteers are like the teeth of a viperfish. Though the creature looks pretty horrific, they only grow to about 12 inches long, and they like to stay deep in murky waters to avoid detection. Sure, those prehistoric-looking jaws are scary, but only as long as you stay ill-informed. Gold and the Petrodollar. From Rothschild To Koch Industries: Meet The People Who "Fix" The Price Of Gold. Earlier today many were stunned when the historic, 117-year old, London Silver Fix announced that in three months it would no longer exist. 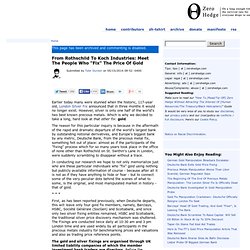 However, silver is only one half of the world's two best known precious metals. Which is why we decided to take a long, hard look at that other fix: gold. Prins Floris. Floris Frederik Martijn Prins van Oranje-Nassau, Van Vollenhoven is op 10 april 1975 in Nijmegen geboren. 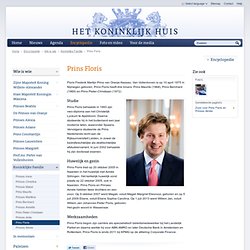 Submitted by Adam Taggart via Peak Prosperity, Every once in a while, an Off the Cuff interview is so important that we decide to make it available to the entire public. 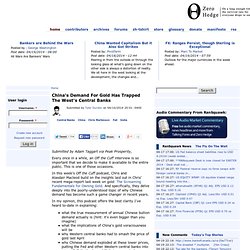 This is one of those occasions. In this week's Off the Cuff podcast, Chris and Alasdair Macleod build on the insights laid out in Chris' recent mega-report last week on gold: The Screaming Fundamentals for Owning Gold. And specifically, they delve deeply into the poorly-understood topic of why Chinese demand has become such a game changer in recent years. The Latest Heist: US Quietly Snatches the Ukraine’s Gold Reserves. 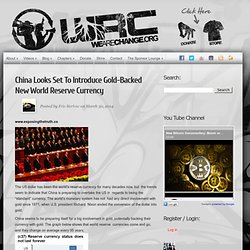 Week 10, SGE withdrawals 36 MT, 454 MT YTD. The price of gold is rising, but is this purely because of the tensions in the Ukraine? 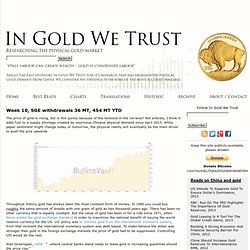 Not entirely, I think it adds fuel to a supply shortage created by enormous Chinese physical demand since April 2013. While paper sentiment might change today or tomorrow, the physical reality will eventually be the main driver to push the pice upwards. Throughout history gold has always been the most constant form of money. In 1900 you could buy roughly the same amount of breads with one gram of gold as two thousand years ago. Bundesbank Must Intervene To Reassure German Gold Will Come Back. Has the German gold gone, at least the part vaulted by the US Fed? 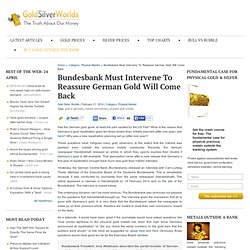 What is the reason that Germany’s gold repatriation goes ten times slower than initially planned (after one year), see here? Why was a new repatriation planning set up (after one year)? These questions have intrigued many gold observers, to the extent that the interest was sparked even outside the precious metals community. Recently, the German newspaper Handelsblatt released an article in which they openly express their doubts if Germany’s gold is still available.

That speculation came after a new release that Germany’s first year of repatriation brought back much less gold than initially intended. Yesterday, the German Central Bank (Bundesbank) released an interview with Carl-Ludwig Thiele, Member of the Executive Board of the Deutsche Bundesbank. Jim Willie - US $ implosion & Petrodollar demise in 2014, QE Inflation, Gold Standard, more... Jim Willie Reveals the SMOKING GUN On US Gold Rehypothecation!