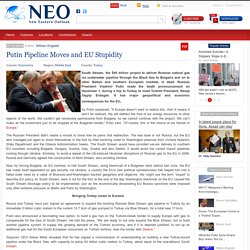 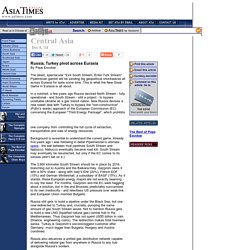 South Stream project cancelled: What it means and why it's important. ​Putin, Xi Jinping sign mega gas deal on second gas supply route — RT Business. Destabilization – US Weapon in a Energy War in Ukraine and the Middle East. The United States is doing its best to estrange the European Union from Russia to get the upper hand in a free trade deal, and also, to manipulate European countries into buying America’s relatively more expensive natural gas. 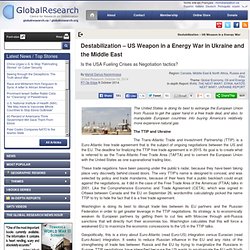 The TTIP and Ukraine The Trans-Atlantic Trade and Investment Partnership (TTIP) is a Euro-Atlantic free trade agreement that is the subject of ongoing negotiations between the US and the EU. The True Cost of Oil: $65 Trillion a Year? Quick: What's the most common criticism of renewable energy? 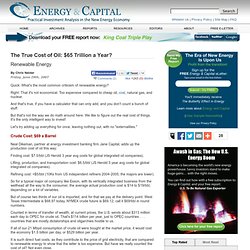 Right: That it's not economical. Too expensive compared to cheap oil, coal, natural gas, and nuclear. Russia Discovers Massive Arctic Oil Field Which May Be Larger Than Gulf Of Mexico. In a dramatic stroke of luck for the Kremlin, this morning there is hardly a person in the world who is happier than Russian president Vladimir Putin because overnight state-run run OAO Rosneft announced it has discovered what may be a treasure trove of black oil, one which could boost Russia's coffers by hundreds of billions if not more, when a vast pool of crude was discovered in the Kara Sea region of the Arctic Ocean, showing the region has the potential to become one of the world’s most important crude-producing areas, arguably bigger than the Gulf Of Mexico. 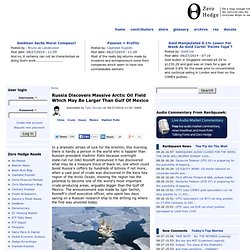 The announcement was made by Igor Sechin, Rosneft’s chief executive officer, who spent two days sailing on a Russian research ship to the drilling rig where the find was unveiled today. The oil production platform at the Sakhalin-I field in Russia, partly owned by ONGC Videsh Ltd., Rosneft Oil Co., Exxon Mobil Corp. and Japan's Sakhalin Oil and Gas Development Co. on June 9, 2009. Israel signs $15 billion gas deal with Jordan. Israel signed a memorandum of understanding with Jordan Wednesday, under which it will supply the Hashemite Kingdom with $15 billion worth of natural gas from its Leviathan energy field over 15 years. 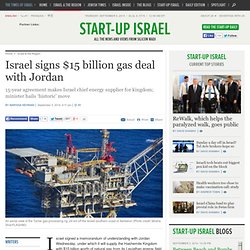 Get the Start-Up Israel's daily newsletter and never miss our top stories Free Sign up! The new deal is the largest collaboration with Jordan to date, and will make Israel its chief supplier, according to the Globes business news website. Putin Says The Petrodollar Must Die, "The Dollar Monopoly In Energy Trade Is Damaging Russia's Economy" On one hand, despite initial weakness following Europe's triple-dip red alert, futures declined only to surge higher after some headline or another out of Russia was again spun to suggest imminent Ukraine de-escalation (something which Russia whose only interest is to keep crude prices high, has absolutely zero interest in), perpetuating a rumor which was set off by a Russian media outlet tweet last week that has sent S&P futures over 50 higher in less than a week on... nothing. 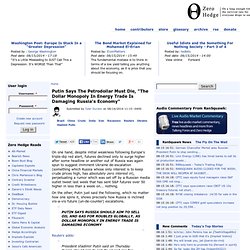 On the other, Putin just said the following, which no matter how one spins it, shows precisely how Russia is inclined vis-a-vis future (un-de-counter) escalations. Reuters adds: President Vladimir Putin said on Thursday Russia should aim to sell its oil and gas for roubles globally because the dollar monopoly in energy trade was damaging Russia's economy. Vladimir Putin signs historic $20bn oil deal with Iran to bypass Western sanctions. Further talks between the two countries will take place next month, he said. 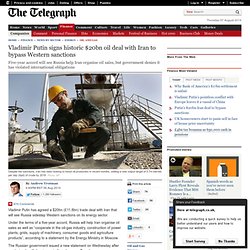 A deal could see Russia buying 500,000 barrels of Iranian oil a day, the Moscow-based Kommersant newspaper has previously reported. That would be about a fifth of Iran’s output in June and half its exports. There’s a question over “how substantive this memorandum is”, Richard Mallinson, an analyst at Energy Aspects in London, told Bloomberg. “There would be various practical limitations in terms of Iran’s current production capacity, geography and shipping logistics, as well as US sanctions.” The move is a win-win for both nations after they were hit with Western sanctions aimed at limiting their energy sectors.

The European Union recently unveiled a raft of measures to restrict certain oil exploration and oil drilling related products in Russia after what President Barack Obama called the country's "illegal actions" in Ukraine. Humanity May Face Choice By 2040: Conventional Energy or Drinking Water. A set of studies based on three years of research concludes that by 2040, the need for drinking water and water for use in energy production will create dire shortages. 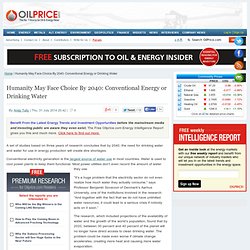 Conventional electricity generation is the largest source of water use in most countries. The Shadow Wars of the 21st Century. St-century-energy-wars. Global conflicts are increasingly fuelled by the desire for oil and natural gas and the funds they generate. 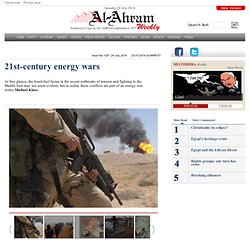 Iraq, Syria, Nigeria, South Sudan, Ukraine, the East and South China Seas: wherever you look, the world is aflame with new or intensifying conflicts. South Stream puts Serbia in conflict with EU, 19 July 2014. EU wants ‘Mediterranean hub’ for Azeri gas - MaltaToday.com.mt. The proposed gas pipeline route from Azerbaijan The European Union is looking southwards to develop a “southern gas corridor” for natural gas from Azerbaijan to fuel the European mainland. The European Commission released an EU energy security strategy earlier this week, in response to the political crisis in Ukraine which is threatening gas supplies from Russia, after Russian President Vladimir Putin warned that Russia could cut off supplies to Ukraine unless the latter starts to pay off its gas debt, which Russia’s Gazprom says stands at €2.5 billion. Inferred fossil-fuel subsidies: A new database. No comprehensive database of directly measured fossil-fuel subsidies exists at the international or the sub-national level, yet subsidies may be crucial drivers of global carbon emissions.