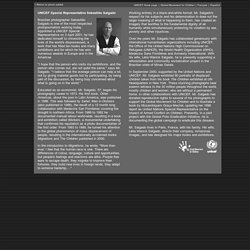 Appointed a UNICEF Special Representative on 3 April 2001, he has dedicated himself to chronicling the lives of the world's dispossessed, a work that has filled ten books and many exhibitions and for which he has won numerous awards in Europe and in the Americas. "I hope that the person who visits my exhibitions, and the person who comes out, are not quite the same," says Mr. Salgado. "I believe that the average person can help a lot, not by giving material goods but by participating, by being part of the discussion, by being truly concerned about what is going on in the world.

" Educated as an economist, Mr. Turning Human Suffering Into Art. 06_20_Beautiful_Suffering.pdf. In Searing Images, Ravages of Upheaval - Brazilian Chronicles the Toll of Migration. PARIS, April 23— In the early 1990's, while traveling the world to photograph the vestiges of the Industrial Age, Sebastiao Salgado repeatedly came across large numbers of people on the move, not only refugees and displaced persons fleeing wars or famine, but also legions of peasants migrating to cities to escape poverty. 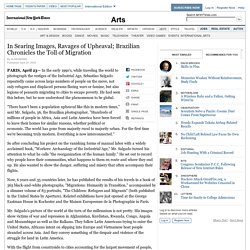 He had seen this before, but he now understood the phenomenon to be global. ''There hasn't been a population upheaval like this in modern times,'' said Mr. The Photography of Sebastião Salgado: Interview with Gallerist Peter Fetterman. Sebastião Salgado is a Brazilian-born photographer, who began his career as an economist. 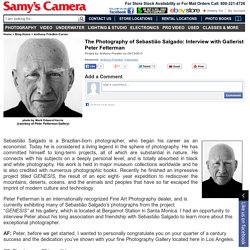 Today he is considered a living legend in the sphere of photography. He has committed himself to long-term projects, all of which are substantial in nature. He connects with his subjects on a deeply personal level, and is totally absorbed in black and white photography. His work is held in major museum collections worldwide and he is also credited with numerous photographic books. Recently he finished an impressive project titled GENESIS, the result of an epic eight- year expedition to rediscover the mountains, deserts, oceans, and the animals and peoples that have so far escaped the imprint of modern culture and technology. Salgado_and_Sahel.pdf. The natural world, photographed by Sebastião Salgado – sponsored by a corporation that's despoiling the Amazon - News - Art.

But the museum is now under fire from environmentalists after accepting sponsorship for the exhibition from a mining giant accused of threatening landscapes similar to those captured by the Brazilian photojournalist. 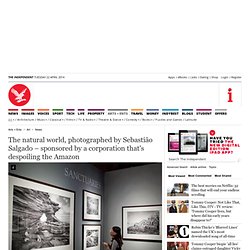 In a 2012 poll conducted by corporate watchdogs, The Public Eye, the Brazilian mining company Vale was awarded the dubious distinction of being the company with the “most contempt for the environment and human rights” in the world. The firm’s sponsorship of this summer’s Natural History Museum exhibition has generated anger amongst green campaigners, chiefly because of the company’s involvement in the controversial Belo Monte dam, with critics claiming it will flood about 500 square kilometres of Amazon rainforest and displace indigenous people like those depicted in Salgado’s Genesis exhibition. But last night the Natural History Museum defended its decision. Through the lens of Sebastião Salgado: Visual aesthetics and conflict. Through the lens of Sebastião Salgado: Visual aesthetics and conflict Posted by Sofía Nogués on February 20, 2013 · Leave a Comment ‘Roland Barthes, in his book Camera Lucida, stated that photography, rather than film or television, is the collective memory of the world. 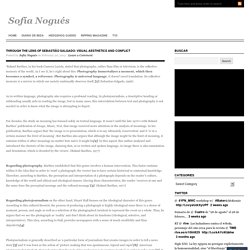 As I see it, he’s right about this. Photography immortalizes a moment, which then becomes a symbol, a reference. Photography is universal language; it doesn’t need translation. As in written language, photography also requires a profound reading. For decades, the study on meaning has focused solely on textual language. Regarding photography, Barthes established that this genre involves a human intervention. Zen and the Magic of Photography: Learning to See and to Be through Photography - Wayne Rowe - Google Books. Wayne Rowe is a professional photographer and professor of photography in the Communication Department at California State Polytechnic University, Pomona. 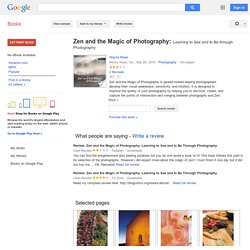 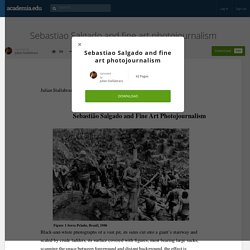 Analyzing this tendency, Ben Badgikian has shown how,as ever fewer owners come to govern ever fewer but ever greater media companies,this, as a matter of course, hands power not only to proprietors but to advertisers,filling the pages of even once serious publications with ‘features’ on food, fashion,cars and the lives of TV personalities. Obviously, the prospects in this mass mediafor a photojournalism which disturbs the contemporary myths of the market are notgood—nor are they for anything which might disrupt the ‘buying mood’.These changes in political orthodoxy and media ownership have had a highlydetrimental effect on photojournalism, to the extent that some photographers andcritics have predicted its demise. Their concern is not only with simple exclusion butwith newspapers’ and magazines’ control in editing, selecting and presenting imagesso as to stress the spectacular at the expense of the critical. Sunday Times Ben H. 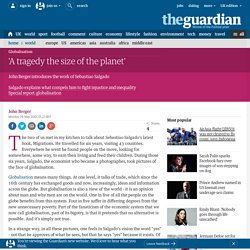 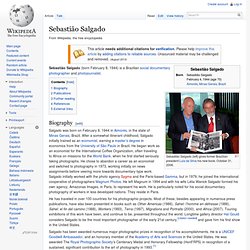 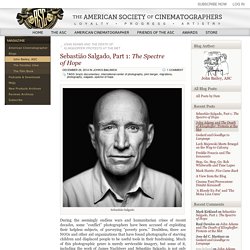 Doubtless, there are NGOs and other aid organizations that have found photographs of starving children and displaced people to be useful tools in their fundraising. Ex 14 : John Mraz on Sebastião Salgado - Gaslight Photography. I’ve fallen behind on this blog for a number of reasons but the main reason is holidays so I cannot really complain !

Anyway the course asks us to read John Mraz’s article (Mraz, 2002) on Salgado and research the works referenced in it. Although Mraz mentions some of Salgado’s other works in passing he concentrates on the ones in which Salgado characterises Latin Americans – Other Americas (1986), Terra (1997) and Migrations (2000). In terms of Salgado’s biography there’s little point in repeating what’s in Mraz’s article and the Guardian article referenced below. Suffice to say that Salgado was born in Brazil before moving to Paris to complete his economics education and then to London where he was based while working and travelling for the International Coffee Organisation. It was during these travels that photography began to interest him and he soon gave up working as an economist to become a photographer, often working with Médecins sans frontières.

Gaz References. Salgado Archives - Gaslight Photography. I’ve fallen behind on this blog for a number of reasons but the main reason is holidays so I cannot really complain ! Anyway the course asks us to read John Mraz’s article (Mraz, 2002) on Salgado and research the works referenced in it. Although Mraz mentions some of Salgado’s other works in passing he concentrates on the ones in which Salgado characterises Latin Americans – Other Americas (1986), Terra (1997) and Migrations (2000).

In terms of Salgado’s biography there’s little point in repeating what’s in Mraz’s article and the Guardian article referenced below. Suffice to say that Salgado was born in Brazil before moving to Paris to complete his economics education and then to London where he was based while working and travelling for the International Coffee Organisation. It was during these travels that photography began to interest him and he soon gave up working as an economist to become a photographer, often working with Médecins sans frontières.

Gaz References. The-documentary-debate-aesthetic-or-anaesthetic-excerpt1-2. Art as Civil Disobedience. In her essay of 1970, Civil Disobedience, Hannah Arendt writes of the difference between shared concerns, which can bind together a group of people with diverse identities, and shared interests, which codify diversity as divisive. For Arendt, a civil disobedient does not operate as an individual; as such, he or she functions and survives only as a member of a group. This is as opposed to the conscientious objector, whose subjective experience of individual conscience distinguishes him or her from the rest of society, “cannot be generalized,” and is therefore “unpolitical.” The civil disobedient may have a conscience, but it is not on behalf of this conscience that he or she acts: it is on behalf of an opinion that that disobedient shares with other disobedients.

The opinion does not have to be shared equally or in the same way in order to bind the group together: it is an idea that is considered important to the group, however differently it is considered. Chris Burden, L.A.P.D. Exercise 16 – John Mraz on Sebastiao Salgado. This exercise asks us to read Mraz essay on Sebastion Salgado, Ways of seeing Latin America, then to research the work referenced. Born in Brazil to middle class parents, Salgado studied economics at university, but following military coups and students being killed and tortured, Salgado left Brazil for Paris where he studied for his doctorate.

After borrowing a camera from his wife while on a business trip for the International Coffee Organization, Sebastião Salgado shifted his career from trying to reveal his concerns for social change through economic reports to using photographs. He is quoted as saying: “When I came back to London, the pictures gave me ten times more pleasure than the economic reports I had to write.” Elevating the common man: His portraits glorify the worker. But his critics think too much glory has accrued to Salgado himself - Arts and Entertainment - The Independent. That this has happened to Salgado is the source of a great deal of trouble in the world of photography. Salgado is a member of Magnum, the photographic co-operative founded in 1947 and closely associated with socially concerned photography.

Much of his work concentrates on areas of poverty and suffering, and its elevation to the world of art, via gallery and museum walls, has not found favour with the critics, while his large advances for photographic projects have aroused jealousy among other photographers. In the backlash to this success, his pictures have been criticised as being too romantic, too beautiful, more concerned with aesthetics than reportage. In two weeks' time we can judge for ourselves when the exhibition of Salgado's latest project, 'Workers', a study of manual labour throughout the world, opens at the Royal Festival Hall in London, the latest stop on its tour around the five continents. Estudios Interdisciplinarios de América Latina y el Caribe - Sebastião Salgado's Latin America. JOHN MRAZ Universidad Autónoma de Puebla.

Camila Sumi Fotografia (Sebastião Salgado: analysis on his most recent...) Leonardo Reviews Home. A Different Light: The Photography of Sebastião Salgado by Parvati Nair Duke University Press, Durham and London, 2011 376 pp., illus. 21 b/w. PHOTO METRO - Interview with Mary Ellen Mark - 908F-000-002. All photographs by Mary Ellen Mark are Ó Mary Ellen Mark/Library. Interview_16. Interview with Fazal Sheikh by Eric Gottesman Eric Gottesman: In a 1994 Village Voice review of your book A Sense of Common Ground by Vince Aletti, you said, "There must be some middle ground between journalism and art, where you can be honest and still be supportive.

‘The Salt of the Earth’ Review: Wim Wenders’ Latest Documentary Stunner. Documentary Photography and the Appropriation Argument, part 3 - Mappemunde. There is an argument that I hear far too often, one that is frequently used to quell discussion and to block interaction and empathy. DocumentaryDebate. ΑΚΑΔΗΜΙΑ ΔΗΜΙΟΥΡΓΙΚΗΣ ΦΩΤΟΓΡΑΦΙΑΣ (Leica Academy) - Curriculum. By Nektarios (Nerris) Markogiannis. (Notes on) Politics, Theory & Photography: 10/2005. Syrian Suffering on Display: It’s Happening Now... Photographers capturing the horrors of war and transporting them to the safe environments of galleries raise questions as to where the boundary of what art is lies. When Lebanese artist Rabih Mroué debuted “The Pixelated Revolution” this year, it brought forth questions on how artists can take on the region’s uprisings without seeming “callous or crass.” The one-man show had the artist professorially presenting a YouTube clip of a Syrian who, with a handheld camera, unwittingly recorded his own (presumed) death by sniper fire.

(Notes on) Politics, Theory & Photography: Beauty & Photographs of Suffering, II. Elaine Scarry observes in her On Beauty and Being Just (Princeton UP, 1999) that critics often complain about the baleful political effects of beauty in one of two ways.