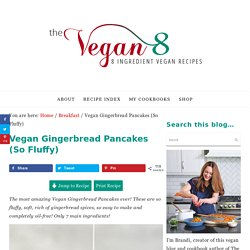 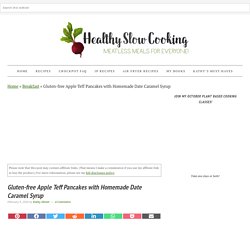 I don’t know about you, but this autumn I need to get back into a healthy routine. Breakfast is a great place to start treating yourself well. Please note that this post is sponsored by The Teff Company, the makers of Maskal Teff™ products . If you can’t find them in your local store you can order Maskal Teff™ products on Amazon. These apple teff pancakes will have you jumping out of bed. Banana Dosa, a South Indian Banana Pancake. Vegan Chocolate Chip Pancakes. Pumpkin French Toast Bake. Pumpkin french toast = breakfast of champions. 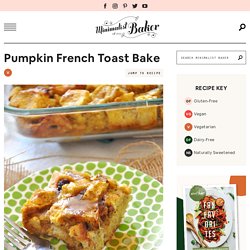 Take my word. Remember my 7-ingredient muesli bread? Well, it’s making another appearance in this pumpkin french toast. Chopped up into cubes, it makes the perfect base for a very fall breakfast. I’ve always made french toast the traditional route: dip bread into egg batter and fry right when you’re ready to eat. The ‘batter’ consisted of several free range eggs, a healthy dash of milk, a scoop of pumpkin butter and plenty of pumpkin pie spice. You guys, it’s possible that I’ve never been so excited to hop up out of bed on a Saturday to preheat my oven. As you can see, it turned out phenomenal. Topped with a little maple syrup (agave or honey) and it’s phenomenal. If there’s just two of you dining on this breakfast, simply cut the recipe in half or even one-fourth for a more appropriate serving size. Prep Time 10 hours 10 minutes. Pumpkin Cream Cheese-Stuffed French Toast - Vegan Yack Attack. A comforting and deluxe version of a brunch favorite, this Pumpkin Cream Cheese-Stuffed French Toast is sure to please! 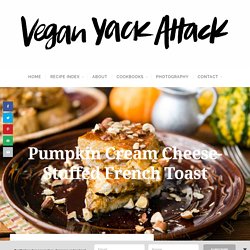 French toast, as a homemade dish, used to intimidate me. Vegan French Toast Recipe. Soaked in eggs and milk and then fried in butter, French toast is a big no-no for those who follow a plant-based diet. 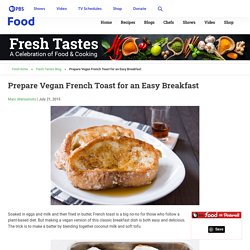 But making a vegan version of this classic breakfast dish is both easy and delicious. The trick is to make a batter by blending together coconut milk and soft tofu. This combination works so well because coconut milk provides a rich, creamy base to which the tofu adds body and the power to set the custard as it cooks. Because there are no eggs in the batter, you don’t have to worry about undercooking or overcooking the French toast, making it easy on those mornings when your brain hasn’t quite woken up yet.

With an exterior appearance that’s almost indistinguishable from the dairy and egg version and an interior that’s plush and ultra creamy, the only giveaway that you’re not eating eggs is the snow white color of the inside. I’ve left the custard very simple, but feel free to dress it up with cinnamon, nutmeg, or even some cocoa powder for some chocolate french toast. Vegan French Toast Recipe with Coconut Milk - Running on Real Food. This delicious coconut vegan french toast recipe is easy to make with simple , wholesome ingredients. 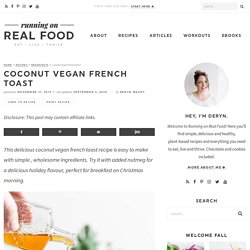 Try it with added nutmeg for a delicious holiday flavour, perfect for breakfast on Christmas morning. Who doesn’t love a delicious, decadent breakfast on Christmas morning? What gives this french toast a holiday perfect eggnog quality, is the addition of maple syrup and nutmeg. Vegan Pumpkin French Toast. Oct 06, 2013 To kick off Pumpkin Week, I thought I’d share this pumpkiny-delish french toast recipe with you. 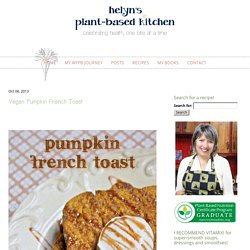 MAXIMUM YUM is what the consensus was in my house. Yes, indeed… So let’s get right to it, shall we? Ingredients: 8-10 slices whole grain bread (NOTE: the type of bread you use will greatly affect the finished product. . ~ for the batter: Vegan MoFo: Pumpkin Pie French Toast. I'm so excited to be part of Vegan MoFo (Vegan Month Of Food) for the second year in a row. 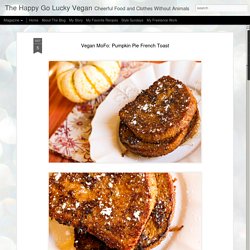 Essentially, the goal is to feature ah-mazing vegan food as often as I can. I'm thinking the fact that I'm nearly 7 months pregnant gives me a slight edge - delicious food (made easy) is now, more than ever, my joie de vivre. Pumpkin Chocolate Chip Pancakes - Clean Eating Veggie Girl. A warm and comforting stack of vegan pancakes- because pumpkin and chocolate should most definitely be eaten together for breakfast! 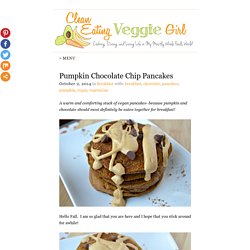 Hello Fall. I am so glad that you are here and I hope that you stick around for awhile! Now that Fall has officially made its appearance, you know exactly what that means on the food front. Vegan Pumpkin Pancakes. A while back a friend from Portland messaged me and asked where in the world the pumpkin pancakes were on our site. 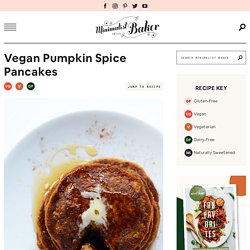 GOOD QUESTION. Answer: Here they are! Vegan Banana Pumpkin Pancakes - The Whole Serving. Spiced Up & Stacked Pumpkin Butter Pancakes For One — Oh She Glows. I am downright giddy this morning. The sun is finally here and the temperature is warm! And it is supposed to stay this way for the Thanksgiving weekend. I feel like running a marathon. Ok, maybe not a full marathon, but I am excited for my run today. ;) Pumpkin Spice Waffles. I love pumpkin. I love coffee. I love waffles. Hooray! Party in the mouth right here, right now.

These waffles are my way of giving fall a big fat hug for arriving right on time. John and I have been coffee snobs ever since living in Portland and being exposed to the wonder that is medium-roasted coffee; as in coffee that hasn’t been roasted to a burnt crisp. I used to think, “the darker, the bolder, the better!” However, the kind of coffee you want for these waffles is not the good stuff. But really, any kind of bean will do. These waffles are uber simple, requiring just 1 bowl and about 30 minutes from start to finish. Carrot Cake Waffles - Super Healthy! These waffles keep you full for hours! The recipe makes two carrot cake waffles… and you can eat them both. Soft and indulgent waffles, covered in a thick layer of frosting. It’s almost like eating real carrot cake for breakfast, without that crash-and-burn feeling you get from consuming too much sugar.

You can enjoy all the deliciousness of carrot cake, while getting heart-healthy fiber, whole grains, and vitamins at the same time! These waffles are best with coconut butter or my Healthy Cream Cheese Frosting. Vegan Snickers Pancakes. When I was a little girl, I used to love going shopping with my mom. We’d play music in the car, both get a little something for ourselves, and there was almost always some kind of dessert involved. If it was Dairy Queen, Mom would get a chocolate dip cone every time; I’d opt for the grape star kiss (total fail now that I think about it). If it was Braum’s, dirt sundae for me every time. But if it was the grocery store, there was no question about it: I was getting a Snickers. Snickers have always been my favorite candy bar for four reasons: nougat, peanut, chocolate, caramel; enough said.

These pancakes mock those flavors precisely, but in a healthier, more vegan sort of way. Think warm, pillowy vegan pancakes studded with salty peanuts and plenty of chocolate chips. Then topped off with vegan caramel and served warm and melty for morning delight. Chocolate Chip Oatmeal Pancakes. Hello, world. That’s what WordPress recommends I say here for my first post.

Personally, I disagree. Flourless Pumpkin Oat Blender Pancakes - {Vegan + GF} Vegan Blueberry Muffin Pancakes. Banana-Split Pancakes for One! Breakfast just got 1,000 times more fun. Easy Weekend Pancakes. Maple Chai Spice Pancakes. Vegan Gingerbread Waffles. Ho, ho, ho. Salted Caramel Pecan Waffles with Cinnamon Apple Topping. There are some words and phrases that just get my heart all in a tizzy just at the mere thought of them. Words that cross my mind a little more slowly than others, phrases that like to linger for a little while. “Salted Caramel” is one of them. “Waffles” is another. Coconutty Cinnamon Roll Pancakes — Produce On Parade. I tried kickboxing today. Peanut Butter Cup Pancakes. Let’s get one thing straight. These pancakes may be healthier than they actually appear, but they aren’t health food. So put away your calorie rulers and speculative eye and let’s get on with this dang thing.