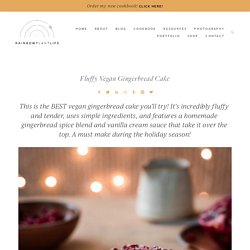 See “ingredient spotlight” section above for more notes. I recommend using freshly grated nutmeg instead of ground. It makes a noticeable difference in baked goods. It’s sweeter, spicier, and more potent in flavor. Use a digital scale and/or measure your flour properly. But if you don’t have a digital scale, please do not scoop the flour straight out of the bag or container. Typically, when you scoop 1 cup of flour straight out of the bag/jar, you’re actually scooping closer to 1 1/4 cups in grams. Instead, use the spoon and level method. No overmixing! I use a standard 9x5-inch loaf pan (23x13 cm), but if your pan is slightly smaller (e.g., 8x4-inch), you might need to add an extra five minutes to the bake time. Get an oven thermometer and allow adequate time to preheat! 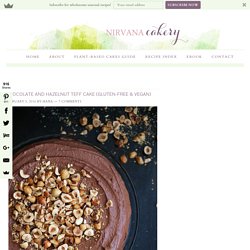 For a while, I wanted to test teff flour, but the price has always put me off, well until now. Teff is a gluten-free grain native to Ethiopia high in fiber, iron, protein and calcium and you can buy teff flour in most health shops these days. The flour is dark in colour and I would describe the taste as quite earthy, nutty with a gritty texture. I’ve made two versions of this cake, one without the banana, although the taste was great, the cake was too crumbly and it needed a bit more structure. I wanted the recipe to be vegan as well as gluten-free and so in the second version, I’ve opted for bananas to build the body.

The chocolate hazelnut frosting and roasted hazelnuts on top make it just that little bit more special and perfect if you like something more indulgent. Vegan Apple Cider Donut Cake Recipe with Cinnamon Sugar Topping. Welp, it was 40 degrees when I woke up this morning, and there are a few nights where it’s supposed to drop into the 30s this week. 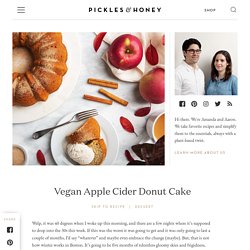 If this was the worst it was going to get and it was only going to last a couple of months, I’d say “whatever” and maybe even embrace the change (maybe). But, that is not how winter works in Boston. It’s going to be five months of relentless gloomy skies and frigidness, which is why every October Aaron and I have long talks about moving to Southern California* and I go all-in on baking in the interim (because carbs). I haven’t made a single thing with pumpkin this Fall (I know. Vegan Pumpkin Carrot Bread - One Bowl. Made in just one bowl with simple ingredients, this vegan pumpkin carrot bread is perfectly moist and full of delicious fall flavor thanks to pumpkin spices and pumpkin puree. 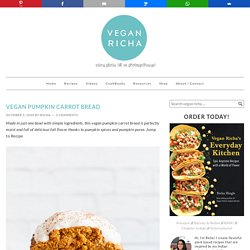 Jump to Recipe If you’re a fan of Starbuck’s Pumpkin Bread, this vegan carrot pumpkin bread is for you. It is just as moist but made with wholesome ingredients and two kinds of veggies. Vegan Apple Cake - A Virtual Vegan. Healthy Vegan Carrot Cake with Cream Cheese Icing. OH my word, friends. 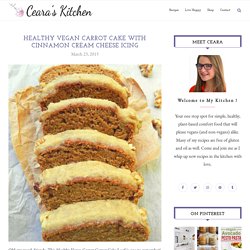 This Healthy Vegan Carrot Carrot Cake Loaf is one to remember! This might just be my new favorite quick bread. Moist, soft and flavorful vegan carrot cake topped off with a thick layer of Cinnamon Cream Cheese Frosting. Let’s just say this Vegan Carrot Cake did not stand a chance around here… it was gone in under 2 days. Yum! White Chocolate Dark Chocolate Raspberry Tort - Rawmazing Raw and Cooked Vegan Recipes. Chocolate Espresso Hazelnut Frozen Torte - Rawmazing Raw and Cooked Vegan Recipes. Did I really say that? 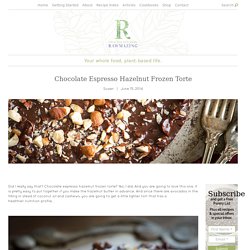 Chocolate espresso hazelnut frozen torte? Yes, I did. And you are going to love this one. It is pretty easy to put together if you make the hazelnut butter in advance. And since there are avocados in the filling in stead of coconut oil and cashews, you are going to get a little lighter tort that has a healthier nutrition profile. Don’t get me wrong, this is a dessert and should be treated as such. Enjoy this chocolate torte. Espresso Powder I am using some espresso powder in this recipe. Crust 1/2 cup almonds1/2 cup cacao powder4 dates, soaked until softPlace all ingredients in food processor. Filling. Triple Layer Chocolate Mousse Cake Vegan Gluten free Recipe. No Bake, No Palm oil. Decadent Triple Chocolate Mousse Cake /Pie has a Chocolate almond crust, a dark Chocolate mousse, a lighter mousse. 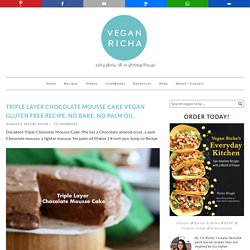 No palm oil Makes 1 8 inch pan Jump to Recipe I told you. This year is going to be chocolatey. Be ready for a Chocolate Coma. Gluten-Free Vegan Tiramisu {Refined Sugar-Free, Paleo & Raw} What happens when an already incredible recipe gets even better?! 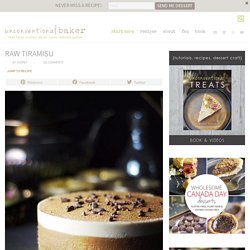 Make this and you’ll find out ;) This raw tiramisu is hands down the most made, remade, visited, and shared recipe on the blog of all time — and one of the oldest. Seems it took the internet by storm back when my blog was but in its wee fledgling state, and the love it received propelled and inspired me towards many a recipe down the line… Fast forward a year and a half and I’m feeling like it needed a makeover. Why? Vegan Tiramisu that totes doesn't taste Vegan. Vegan Lemon Loaf Cake - Vegan Family Recipes. Vegan Cinnamon Roll Cake — Rainbow Plant Life. Here are my tips for nailing that fluffy cake texture so you can trick yourself into thinking you are eating light-as-air cake, even though it’s actually buttery-and-decadent cake. 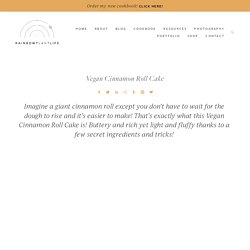 #mindtricks Vegan Buttermilk If you’re familiar with baking, you might know that buttermilk is often added to baked goods because it’s acidic, and a slightly acidic batter tenderizes the gluten in flour, breaking down those tough glutenous strands so the baked goods come out tender and moist. Since traditional buttermilk is made with, well, milk, it’s decidedly not vegan. Luckily, there’s an incredibly easy substitute that works really well: mixing plant-based milk with apple cider vinegar (white wine vinegar is too harsh). Side note: curdling action looks like cuddling action, but they are two very different things. Aquafaba Aquafaba, like vegan buttermilk, is another creative substitute for a common ingredient used in baked goods: eggs. Vegan Chocolate Layer Cake from Gena's New Cookbook with Food52 - HealthyHappyLife.com. This is the perfect Chocolate Cake recipe for fall because it includes pumpkin puree in the luscious filling. 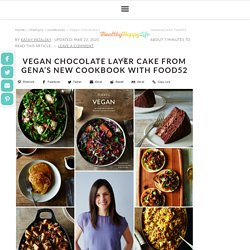 These gorgeous food photos are recipes from Gena Hamshaw’s new cookbook, Food 52 VEGAN: 60 Vegetable-Driven Recipes for Any Kitchen. Learn more about the cookbook and get this recipe for the most amazing fall chocolate cake.. Get THIS recipe below!.. * Chocolate Layer Cake – © 2015 by James Ransom * Butternut Mac/Cheese and Lentil Arugula Salad – © 2015 by James Ransom Gorgeous Book. ..And not only are all of Gena’s recipes delicious, but as a nutrition-savvy vegan she really knows how to craft recipes that make your body feel good.

. * Gingered Carrot Bisque and book cover – © 2015 by James Ransom. Pumpkin Cinnamon Bun Layer Cake. vegan. - HealthyHappyLife.com. A little taste of fall in July is fine by me when the I’m biting into a fluffy, cream-cheese frosted, spice-infused vegan “cinnamon bun” cake! Sweet swirls of cinnamon, vegan butter and baked walnuts unravel in each pumpkin spice – fluffy cake bite. Pumpkin cake + maple cream cheese frosting. YAY for all things pumpkin! Bring cake into the picture and you have a winner. The frosting, well the frosting is a total game changer. Frosted Mint Chocolate Double Layer Cake - Chocolate Covered Katie. Would you ever guess this decadent double layer cake is healthy? That it’s not completely over-the-top loaded with oil, sugar, calories, and fat? Or that each slice has over 5 grams of fiber, 15% of the RDA for iron, and contains healthy MCFAs?

Or that the luxurious frosting can be completely sugar-free? Vegan Chocolate Cake. A few words before we get to this chocolate cake… I was just about done writing this post Friday morning when Aaron noticed sudden swelling around my neck and throat. I have no idea how I didn’t feel it; I must have been really in the writing zone. Long story short(er), we spent the last two days in urgent care, which sent me straight to the ER, and then finally to the hospital very, very late last night for observation and a biopsy (that never happened). A CT scan, round after round of blood work (all normal), no food or water, and eight doctors later (a rant for another post), we’re exhausted but told that it’s a very large thyroid cyst. We’re switching hospitals because my experience was so frustrating.

All of this is to say I’m going to do my best to keep up with regular posting because it keeps me sane and I have some awesome recipes I can’t wait to share, but there may be some unplanned radio silence while we get this sorted. Okay, enough serious stuff. Gingerbread Cake Mix In a Jar for 1. Glutenfree Vegan Recipe. Dont we all love everything in Jars! And Individual servings! And they make for cute and perfect gifts too. So this holiday season, keep an eye out on the blog for things in jars. Not just desserts, but some savory goodies too. Raspberry Polenta Cake Recipe. Chocolate Cake (Secret Ingredient: Beet!) - Glow Kitchen. Banana Chocolate Cake /Bread. Vegan Oil-free recipe. Healthy Chocolate Chip Mug Cake — Edible Sound Bites. Dessert in the middle of the week. Because these frigid temperatures are just not fair.