An expungement is the legal process of removing a criminal conviction from a person's record by changing the conviction to a dismissed case. California state expungement laws make the expungement process attainable for former offenders. If the person petitioning for expungement has completed probation, paid all fines, is not currently serving a sentence, and not facing any additional charges, then he or she may be eligible for expungement.

California Arrest Record Sealing. In California, a person who is arrested for an offense but not convicted may be eligible to apply for an arrest record sealing. 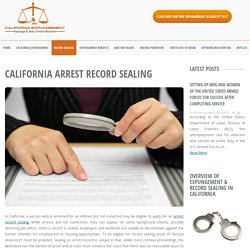 While arrests are not convictions, they can appear on some background checks, possibly deterring job offers. Once a record is sealed, employers and landlords are unable to discriminate against the former offender for employment or housing opportunities. To be eligible for record sealing, proof of "factual innocence" must be provided. Sealing an arrest record is unique in that, unlike most criminal proceedings, the defendant has the burden of proof and as such must convince the court that there was no reasonable basis to believe that the offense with which he or she was charged was actually committed. The petition is filed with the arresting agency that initially oversaw the arrest. California Expungement Law Firm — Hire Best California Expungement Law Firm If you... Expungement in California. There are many benefits of getting a criminal record expunged in California. 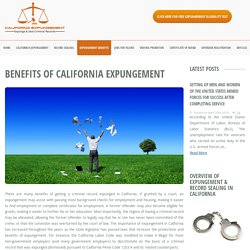 If granted by a court, an expungement may assist with passing most background checks for employment and housing, making it easier to find employment or complete certificates for employment. A former offender may also become eligible for grants, making it easier to further his or her education. Most importantly, the stigma of having a criminal record may be alleviated, allowing the former offender to legally say that he or she has never been committed of the crime, or that the conviction was overturned by the court of law.

The importance of expungement in California has increased throughout the years as the state legislator has passed laws that increase the protections and benefits of expungement. California laws make it illegal for commercial background check companies to provide information about expunged records to employers or landlords. Free California Expungement Advice. EXPUNGEMENT IN CALIFORNIA. Expungement cases are handled on a first-come, first-serve basis with the court that has original jurisdiction over the case, which is where the offender was originally tried. 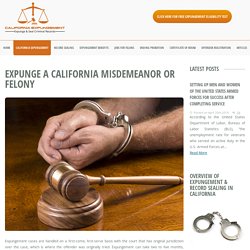 Expungement can take two to five months, depending on the court and number of counts with which the offender has been charged. Those petitioning for an expungement should keep in mind that the 6th Amendment clause does not apply. The clause states, "(i)n all criminal prosecutions, the accused shall enjoy the right to a speedy. . . trial," 1 which is intended to protect defendants from delays between the time that he or she is charged with an offense to the beginning of their trial, and as such does not apply to offenders who have already been convicted. 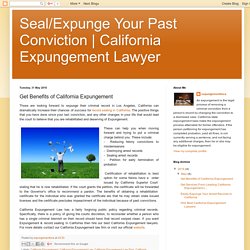 The positive things that you have done since your last conviction, and any other changes in your life that would lead the court to believe that you are rehabilitated and deserving of Expungement. These can help you when moving forward and trying to put a criminal charge behind you. EXPUNGEMENT IN CALIFORNIA. California Expungement Lawyer: Easily Expunge Your Arrest Records In California. Those seeking to expunge their criminal record in Los Angeles, California can quickly expunge their criminal case records. 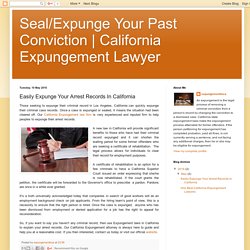 Once a case is expunged or sealed, it means the situation had been cleared off. Our California Expungement law firm is very experienced and reputed firm to help peoples to expunge their arrest records. EXPUNGEMENT IN CALIFORNIA. Enduring the criminal judicial process is very challenging.

In the event that you were convicted of a criminal offense and a sentence was imposed, getting your life back in order is even more challenging than the criminal judicial process. However, this article provides useful information and valuable resources that allows you to get your life back in order. One option to explore after your sentence has been completed is expungement. The expungement process allows certain individuals to clean up their criminal record. California Expungement Lawer: Hire Best California Expungement Lawyers. Do you want to erase your crime record to say no, when anyone talking about your criminal history? 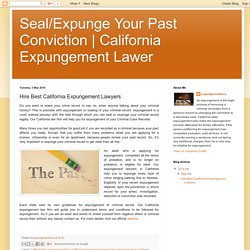