Expresso Magazine is a creative platform that reaches out to you with the best of the fashion and entertainment industry and keeps you hooked on for the entire day. It features the best of nations lifestyle, fashion and beyond. It is a true sophisticate as well as culture worthy. 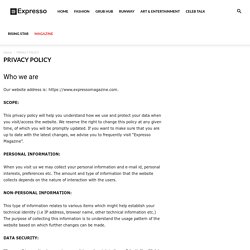 We reserve the right to change this policy at any given time, of which you will be promptly updated. If you want to make sure that you are up to date with the latest changes, we advise you to frequently visit “Expresso Magazine”. When you visit us we may collect your personal information and e-mail id, personal interests, preferences etc. The amount and type of information that the website collects depends on the nature of interaction with the users. 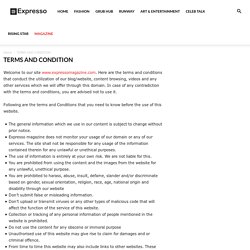 Here are the terms and conditions that conduct the utilization of our blog/website, content browsing, videos and any other services which we will offer through this domain. In case of any contradiction with the terms and conditions, you are advised not to use it. Following are the terms and Conditions that you need to know before the use of this website. Latest Entertainment News. Latest Fashion and Bollywood News. Expresso Magazine is a creative platform that reaches out to you with the latest Bollywood hot gossips, TV Gossips, TV celebrities inside stories, Indian fashion shows and latest news in the entertainment industry to keep you hooked for the entire day. 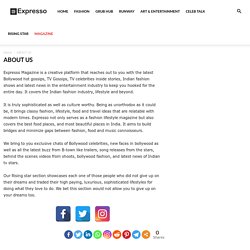 It covers the Indian fashion industry, lifestyle and beyond. It is truly sophisticated as well as culture worthy. Being as unorthodox as it could be, it brings classy fashion, lifestyle, food and travel ideas that are relatable with modern times. Expresso not only serves as a fashion lifestyle magazine but also covers the best food places, and most beautiful places in India. It aims to build bridges and minimize gaps between fashion, food and music connoisseurs. We bring to you exclusive chats of Bollywood celebrities, new faces in bollywood as well as all the latest buzz from B-town like trailers, song releases from the stars, behind the scenes videos from shoots, bollywood fashion, and latest news of Indian tv stars. 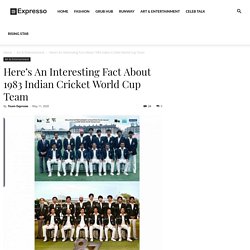 There are several interesting aspects and facts from India’s World Cup journey of how things turned out to be. Similarly, one such fact about the 1983 cricket team was brought to light. One of the players to make it to the 1983 World cup team was Krishnamachari Srikkanth who got married that every year in the month of March. As soon as he realised that the Indian Team was selected for the world cup, he along with six other cricketers had planned a trip to the US. Sharing the light on the same, Kabir revealed, “Srikkanth, along with six other players, was all set to fly out as soon as the group stage ended, confident that India would be knocked out of the contention soon. The team had return tickets booked during mid-tournament as nobody thought that they would get past the group matches that ended on the 20th of June 1983. Over 70 percent Of Pataal Lok Has Been Shot Across Real Locations.

Paatal Lok is a neo-noir web series that will premier on Amazon Prime Video on 15 May 2020. 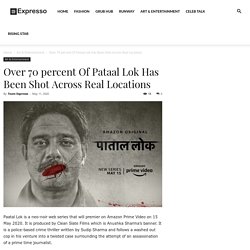 It is produced by Clean Slate Films which is Anushka Sharma’s banner. It is a police-based crime thriller written by Sudip Sharma and follows a washed out cop in his venture into a twisted case surrounding the attempt of an assassination of a prime time journalist. One of the main reasons that the creators set up the plot in Delhi was that it’s the apex of the Indian political scene and where the power centres lie. ‘A Viral Shaadi’ Shot Amidst Lockdown To Start Streaming! Check Inside. Amidst the lockdown, when the whole world has come to a halt, Eros Now has come up with a unique concept for a one of a kind web series that starts streaming recently on the platform. 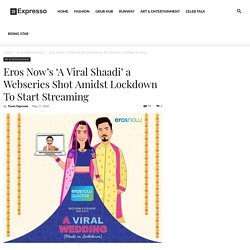 ‘A Viral Wedding’ is an ‘Eros Now Quickie’ web series that has been shot during the lockdown and completely at home, making it an interesting concept with an interesting storyline to it- weddings, which stays a grande affair in the country. Eros Now shared the teaser on their social media with the caption, “Namaskar Nisha aur Rishabh ki quarantine special e-shaadi mein aapka swagat hai. Sanya Malhotra's Take On Her Distinctive Experience On Shooting. Sanya Malhotra is an actress that breathes life into characters on-screen with her impactful performances. 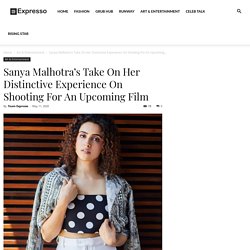 She has made a space for herself in the Indian film industry with the awe-striking characters she has played. Not only is she renowned for her acting but she is also well acclaimed for her mesmerizing dance moves! Urvashi Rautela will be seen opposite Mukkabaaz actor Vineet Kumar Singh  - Expresso Magazine. Actress Urvashi Rautela has now been roped in as the leading lady for the Hindi remake of the Tamil film Thiruttu Payale 2. 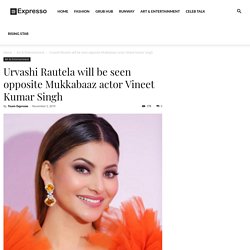 Mukkabaaz actor, Vineet Kumar Singh was announced as the lead actor just a week back. The film will be directed by Susi Ganeshan who made the original film as well. The untitled film will be shot extensively in Varanasi and Lucknow. Voot Select – the new home for great stories - Expresso Magazine. Engaging content, diverse genres, fresh and fiery perspective, Voot has paved its way to being India’s second-largest digital entertainment platform with its varied content line-up. 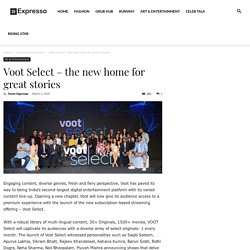 Opening a new chapter, Voot will now give its audience access to a premium experience with the launch of the new subscription-based streaming offering – Voot Select. With a robust library of multi-lingual content, 30+ Originals, 1500+ movies, VOOT Select will captivate its audiences with a diverse array of select originals- 1 every month. The launch of Voot Select witnessed personalities such as Saqib Saleem, Apurva Lakhia, Vikram Bhatt, Rajeev Khandelwal, Aahana Kumra, Barun Sobti, Ridhi Dogra, Neha Sharma, Neil Bhoopalam, Piyush Mishra announcing shows that delve into the mind a serial killer, question gender stereotypes, bring to life the meaning of family, debate on the delivery of the justice system and more is sure to keep India entertained. Asur marks Arshad Warsi’s digital debut. Krystle D'souza aka Tarini Bisht came to capital for promotion of FITTRAT - Expresso Magazine. With stellar performances, glossy cinematography and slick direction packed with soul-stirring music ALTBalaji and ZEE5’s latest web-series FITTRAT is winning hearts. 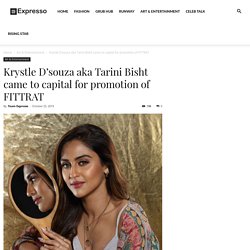 Rudranil Ghosh, one of the lead actors of the show stated, “We put in a lot of effort for Rahasya Romancha Series 2, to make it even bigger and better than Season 1. We had a number of challenges in hand, but as a team, be it the talent squad or the Directorial Team or even the support of the hoichoi Team, the process went on seamlessly and we could deliver a product of choice for the audience. Index of the tashkent files Archives - Expresso Magazine. Sing different types of songs gives me a range to connect with viewers : Swaroop Khan - Expresso Magazine. Famous singer Swaroop Khan has recently sung a song ‘Crazy Lagdi’ for Nawazuddin Siddiqui in Motichoor Chaknachoor, the song is already getting popular with viewers. The song shows Nawazuddin trying his best to woo his neighbour Athiya and their unusual but fun chemistry will leave you in splits.

Nawazuddin plays the character of an ageing man in his forties who is desperate to marry a girl. He hooks on to his neighbour played by Athiya and gives his best to woo the girl into marriage. A Tete-a-tete with Aritra Das, small town bong boy, techie turned producer - Expresso Magazine. By Rituparna Sengupta Basu Aritra Das, small town bong boy, a techie turned producer, in a quick chat with Expresso shares his journey of B-town. While talking about the journey he always says that “determination and struggle always win the game”. An Exclusive interview with Designer-turned Playback Singer Arpita Chakraborty - Expresso Magazine.

By Rituparna Sengupta Basu Music is her passion; her mother was her only music guru. She got introduced to the musical sphere at a very young age. She has lent her voice to more than 15 languages including Kannada, Tamil, Punjabi and Bengali. She can be heard in the remake song ‘ye paisa, ye paisa’ of the film Total Dhamal. Time For Some Exxxtraa Dose Of Passion. Check inside. At a time when one feels complete boredom due to being resigned to their residence, trust ALTBalaji and ZEE5 to keep the viewer’s excitement at its peak. After the resounding success of a special episode titled Pyar Ya Plastic, which launched last month, it’s clear that audiences want more of the same. Back with a bang, ALTBalaji and ZEE5 drop two new episodes of X.X.X. Uncensored – Season 2 on popular demand. Bollywood hot gossips. Bollywood hot gossips. Bollywood update news Archives - Expresso Magazine. Colourful Feet and Bold Moves with Rivir Shoes - Expresso Magazine.

Easy To Cook Recipes Under 15 Minutes While You Work From Home. While you’re working remotely, make sure you stick to your regular eating schedule and keep yourself nourished-not just your stomach, but also your mind and heart. Eating a varied and healthy diet that includes ingredients such as California walnuts that are rich in essential plant-based Omega-3 fatty acids, protein and fibre may go a long way in helping you stay healthy. Walnuts add a beneficial mix of antioxidants, vitamins and minerals to any dish that may reduce risk of heart diseases, lower the prevalence and frequency of depression and boost cognitive health.

Latest Bollywood Movie Review & Releases. Most beautiful places in India. Best Food Restaurants. Indian Fashion Industry. Bollywood hot gossips. Sunny Deol to make a dashing comeback with an action thriller. I want to explore a character where the focus is on me : Jatin Sarna. Working with Kiara Advani was absolute fun in 'Guilty' : Adish Khanna. Shantanu Maheshwari teamed up with whom- lets check out! Watching Avinash in Rickshawala was like deja vu for me : Nandita Puri. Bombay Times Fashion Week 2020 : An ode to the crafts of India. CoronaVirus : Message by Amitabh bachchan and Bollywood celebrities. Have you seen the first poster of the film Ram Rajya? 'Virgin Bhanupriya’ is coming! know the release date.

Loca creates a craze amongst fans, crosses 50 million views! State-of-siege-26-11: Reveals the untold stories of Mumbai Attack. Wait is over KGF Chapter 2 release on this day! - Expresso Magazine. Silently Irrfan was saying millions of words - Expresso Magazine. Holi celebration in Bollywood. Sunny Deol to make a dashing comeback with an action thriller. I want to explore a character where the focus is on me : Jatin Sarna. Working with Kiara Advani was absolute fun in 'Guilty' : Adish Khanna.