Exploring Bharat is a website that aims at providing all the information about India under one roof. We have topics ranging from history, culture, freedom fighters, religions, and the geographical richness of India. We aim to provide authentic information that is properly verified from multiple sources.

List of the Top 10 Most Famous Mosques in India - Exploring Bharat. After the 10th century, when the Mughals started migrating to India, they chose various places to build mosques to carry on their religion and fulfill their religious rituals. 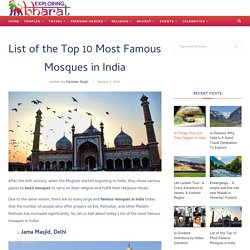 Due to the same reason, there are so many large and famous mosques in India today that the number of people who offer prayers on Eid, Ramadan, and other Muslim festivals has increased significantly. So, let us talk about today’s list of the most famous mosques in India! Jama Masjid, Delhi. History of Tirupati Balaji Temple - Venkateswara Temple. Tirupati Venkateswara Temple is a famous Hindu and Jain temple located in Tirupati. 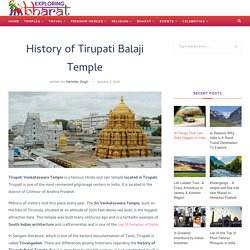 Tirupati is one of the most renowned pilgrimage centers in India. It is located in the district of Chittoor of Andhra Pradesh. Millions of visitors visit this place every year. List of the Top Buddhist Temples & Monasteries in India. India has numerous Buddhist temples and monasteries that are quite famous as our country is the birthplace of Buddhism. 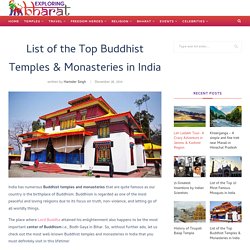 Buddhism is regarded as one of the most peaceful and loving religions due to its focus on truth, non-violence, and letting go of all worldly things. The place where Lord Buddha attained his enlightenment also happens to be the most important center of Buddhism i.e., Bodh Gaya in Bihar. So, without further ado, let us check out the most well-known Buddhist temples and monasteries in India that you must definitely visit in this lifetime! Mahabodhi Temple Located in Bodh Gaya, this temple is a place of holy pilgrimage and is one of the most famous Buddhist temples.

It is believed that Buddha gained enlightenment under a Bodhi Tree, and a descendant of this tree can also be found in the Mahabodhi Temple. Hemis Monastery. Top 20 Muslims Who Made Indian Proud on International Level. India has been grateful to many Indians who have proved their love for their mother country and made us proud. 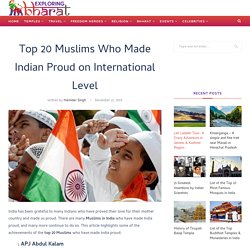 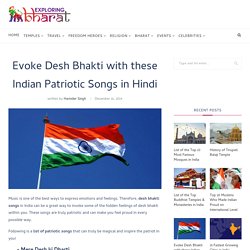 Therefore, desh bhakti songs in India can be a great way to invoke some of the hidden feelings of desh bhakti within you. These songs are truly patriotic and can make you feel proud in every possible way. Following is a list of patriotic songs that can truly be magical and inspire the patriot in you! Mere Desh ki Dharti This is a classic Bollywood song sung by Mahendra Kapoor and is from the movie Upkar. Aazadi This is a song from the movie Bose, The forgotten hero and is composed by A.R. Chodo Kal ki Baatein. 15 Fastest Growing Cities in India - Exploring Bharat. India is the home for some of the world’s most beautiful cities. 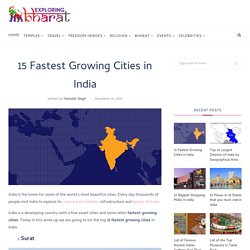 Every day thousands of people visit India to explore its culture and tradition, infrastructure and beauty of India. India is a developing country with a few smart cities and some other fastest-growing cities. Top 10 Largest Districts of India by Geographical Area. 10 Biggest Shopping Malls In India - Exploring Bharat. Everyone loves shopping, and no online portal can replace the feeling of shopping at the malls. 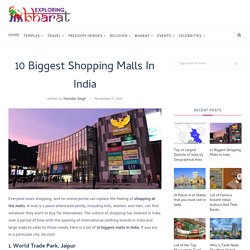 A mall is a place where everybody, including kids, women, and men, can find whatever they want to buy for themselves. 29 Places in 29 States that you must visit in India - Exploring Bharat. India is a country full of wonders, and every state in India has a lot to offer. 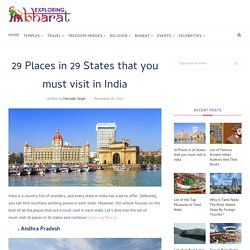 Definitely, you can find countless exciting places in each state. List of Famous Ancient Indian Authors And Their Books - Exploring Bharat. India is a diverse land with a rich literary history. 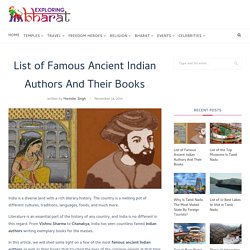 The country is a melting pot of different cultures, traditions, languages, foods, and much more. Literature is an essential part of the history of any country, and India is no different in this regard. From Vishnu Sharma to Chanakya, India has seen countless famed Indian authors writing exemplary books for the masses. Why Is Tamil Nadu The Most Visited State By Foreign Tourists. It is no secret that Tamil Nadu has topped the list of the most foreign tourist arrivals in the entire country yet again! 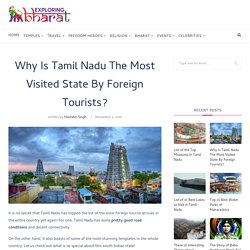 For one, Tamil Nadu has some pretty good road conditions and decent connectivity. On the other hand, it also boasts of some of the most stunning templates in the whole country. Let us check out what is so special about this south Indian state! For the third subsequent year, Tamil Nadu has succeeded in topping the survey of the most foreign tourist arrivals in the entire country. This holds true for domestic tourists as well. Image source: Goibibo.

List of 10 Best Lakes to Visit in Tamil Nadu - Exploring Bharat. Tamil Nadu is a state in India that has not one but many famous and untouched lakes, which adds to the natural beauty of the place and attracting tourists from around the globe. Some lakes are natural while others are human-made. Top Famous Temples in India. List of Best Lakes to Visit in Tamil Nadu. Baba harbhajan singh mystery. Captain Baba Harbhajan Singh is one of the most revered soldiers of the Indian army who is also worshipped and known as the “Hero of Nathula” by the Indian Army soldiers. His soldiers even built a shrine to honor him. According to a legend, soldiers in that area believe that his spirit still protects all the soldiers who have their duties in the difficult terrain of Eastern Himalayas. While he was alive, many gave him the status of a Saint or Baba and is believed to be protecting the country even after his death.

10 Unknown Facts About Abdul Hamid - Hero Of 1965 War. Abdul Hamid was a decorated Indian Army soldier whose military position was of Company Quartermaster Havildar. His contribution to the Indian Army was so immense that he was also posthumously awarded with the prestigious Param Vir Chakra for all his work in 1965 during the Indo-Pakistani war.

He died young at the age of 32, but people still remember his contributions on the battlefield. In the battle of Asal Uttar in 1965, Hamid was killed but not before he annihilated six Pakistani tanks. Goa Bike Trip. In addition to the fun-filled, crazy night parties and the lazy beaches, Goa has a lot more to offer to tourists as well as locals. If you are looking for the perfect holiday destination to relax and unwind, Goa can be the perfect place. From delicious seafood to Portuguese-era cathedrals and hill-top forts, Goa presents the perfect temptations for exploring Indian culture and making for a thorough holiday trip. List of national park in Tamil Nadu. Shiv Kumar Batalvi – Book List and Songs. About Shiv Kumar Batalvi Shiv Kumar Batalvi was a popular poet who wrote in the Punjabi language and was quite famous for his romantic poetry.

He wrote about heightened passion, separation, lovers’ agony, and pathos. He was born in Barapind, Punjab (present-day Pakistan) on July 23, 1936, and died merely at the age of 36 in Punjab on May 6, 1973. Despite dying at a young age, his work is still remembered till date, thanks to its passion and drive that was evident in his masterpieces. List of National Parks in Tamil Nadu. How Does Golden Temple Manage To Feed 100,000 People For Free? Have you visited the Golden temple while you were exploring Bharat?

Did you enjoy the delicious langar (food) there? Did that leave you wondering how they manage to feed so many people in one day? If your answer to these questions is a yes, then you have come to the right place. Here, you will get all the information to help with your curiosity about the Golden Temple langar. How Does Golden Temple Manage To Feed 100,000 People For Free? List of Top 25 Famous Temples in India You Should Visit Now. Are you exploring Bharat and its charm lately? List of 25 Places for Summer Vacations in South India. Summer vacation is a time that kids and adults both look forward to so that they can unwind and enjoy doing some leisure activities.

List of 25 Places for Summer Vacations in North India. India is a gorgeous country with a plethora of pristine places that are untouched by humanity. From chilly mountains to the backwaters to the amazing beaches, North India is a nature’s paradise. Top 10 First Param Vir Chakra Winners - PVC Awardees List. Our nation has witnessed a total of 21 winners of Param Vir Chakra (PVC). Origin of The Word Bharat: Why Did India Come to Be Known as Bharat. India is one of those few nations that have two names.

How many countries have you heard of that have two names – first that is constitutionally documented, and another name that is perhaps an English translation meant for all those people who cannot pronounce the word? It is often a challenge for people whose first language is English or any other European language to pronounce eastern names. Therefore, in the olden times, it was a norm to change all those names, and people would blindly accept the new names without much resistance. Take, for example, our country. We go by two names – Bharat, the original name and India, the name given by people.

Holika Dahan Story - A Story of Holika And Prahalad. Holika Dahan is an essential story in Indian Mythology, and it marks an important festival in Indian tradition. Understand the Story Behind the Kargil War - Vijay Diwas. July 26th was the date on which 19 years ago, the Indian Army succeeded in recapturing all the Indian posts during the Kargil War that the Pakistani Army has occupied. Ever since then, Indians annually observe July 26th as the day to commemorate all the sacrifices that the soldiers made in the Kargil War. Here is everything that you need to know about this war! List of Top 10 Places to Celebrate Holi In India - Exploring Bharat.