John Gentry is a lifelong adventure travel enthusiast and international manager, Philanthropist, and solder. Spent 2011-2015 developing an international team in HsinChu, Taiwan. Early on he spent the better part of the 90's working with the US Army in Germany, Iraq and Kuwait. For kicks, he studied in Alaska 2008-2010 international history for a greater understanding in his adventure travels. He has had some great experiences, and successes traveling around the world documenting his travels with his family via ExploreTraveler

ExploreTraveler Cebu Top na Atraksyon: Sa Panahon ng “New Normal” ExploreTraveler A‌ ‌Guide‌ ‌for‌ ‌Backpacking‌ ‌in‌ ‌the‌ ‌Wild‌ 8 Best Islands To Visit In The Philippines. With more than 7,100 islands, it may seem like an impossible task to reduce it to the top 25 islands – but we like a challenge. 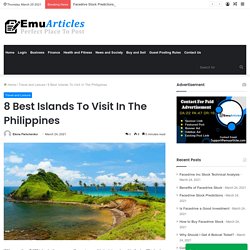 Here are the islands that have the most to offer. You will find islands easily accessible with well-oiled airports and public transport systems, and then you will find islands where there are no more than dirt paths full of holes that you can only hope not to break the tire on your bike. There are islands with big malls full of cinemas and food courts, so there are islands where the only place to buy a soda is a cooler guy on the beach. ExploreTraveler Isla ng Malapascua — Pilipinas. ExploreTraveler Pangingisda Sa Pilipinas. ExploreTraveler Tuklasin ang Misteryo ng Chocolate Hills sa Bohol, Philippines. Things to see in Whittier Alaska. ExploreTraveler Exploring Whittier Alaska. ExploreTraveler Sanxiantai Dragon Bridge Taitung, Taiwan. 18 Exciting Things in Leyte, Philippines. Leyte is a province in the Eastern Visayas region. 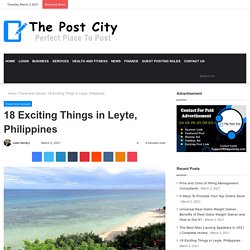 Tacloban City is its capital city, which is also known as the “Gateway to Eastern Visayas.” Because, Ormoc City, my hometown, is a component city of the province and it is also affectionately called “Beauty by the Bay.” Historically, the province was divided into Leyte and Southern Leyte in 1959. And Biliran became a separate province in 1992. Leyte became a part of world history during World War II when one of the largest and fiercest armies battles were fought in the Leyte Gulf. 12 Best Things To Do In Oceanside, California. Located in sunny San Diego County in Southern California in the city of Oceanside and, as the name suggests, this city is also by the sea. 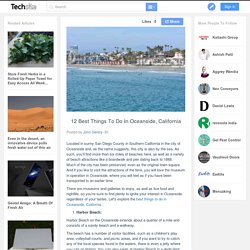 As such, you'll find more than six miles of beaches here, as well as a variety of beach attractions like a boardwalk and pier dating back to 1888. Much of the city has been preserved, even as the original town square. And if you like to visit the attractions of the time, you will love the museum in operation in Oceanside, where you will feel as if you have been transported to an earlier time. There are museums and galleries to enjoy, as well as live food and nightlife, so you're sure to find plenty to ignite your interest in Oceanside, regardless of your tastes. Let's explore the best things to do in Oceanside, California : Harbor Beach: Harbor Beach on the Oceanside extends about a quarter of a mile and consists of a sandy beach and a walkway. Beach House Bodega: Oceanside Pier: Oceanside Museum of Art: Guajome County Park: ExploreTraveler Fun In The Sun At Oceanside California USA. 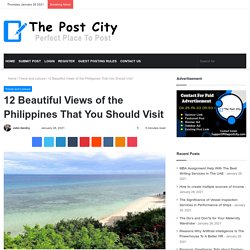