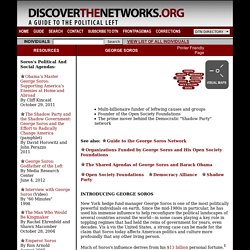 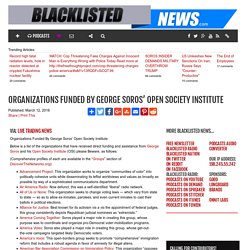 Transcript: Dateline, George Soros Interview. GEORGE NEGUS: Mr Soros, you have a habit as one of the 80 richest men in the world for putting your money where your mouth is, literally. 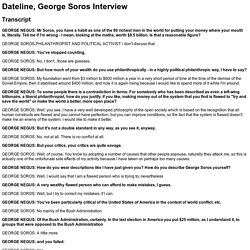 Tell me if I'm wrong - I mean, looking at the maths, worth $8.5 billion. Is that a reasonable figure? GEORGE SOROS,PHILANTHROPIST AND POLITICAL ACTIVIST: I don't discuss that. GEORGE NEGUS: You've stopped counting. GEORGE SOROS: No, I don't...those are guesses. GEORGE NEGUS: But how much of your wealth do you use philanthropically - in a highly political philanthropic way, I have to say? GEORGE SOROS: My foundation went from $3 million to $600 million a year in a very short period of time at the time of the demise of the Soviet Empire, then it stabilised around $400 million, and now it is again rising because I would like to spend more of it while I'm around. GEORGE NEGUS: To some people there is a contradiction in terms. GEORGE NEGUS: But it's not a double standard in any way, as you see it, anyway. George Soros hack: DC Leaks reveal global web of influence.

The billionaire who allegedly made $18.6m profit in 36 hours talks about the magic of the financial markets during a World Economic Forum interview. 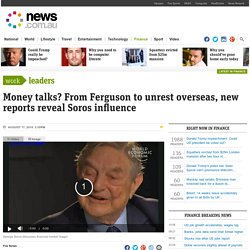 Soros Fund Management chairman George Soros. NEWLY leaked emails and other files from billionaire George Soros’ web of organisations are shedding light on the liberal powerbroker’s extensive influence in political and diplomatic affairs. One email chain shows the Wall Street titan in 2011 personally wrote to then-Secretary of State Hillary Clinton, urging intervention in Albania’s political unrest. Within days, an envoy he recommended was dispatched to the region. Other emails seem to show Soros using his billions to push an anti-Israel agenda, while other documents reportedly detail funding for various grassroots organisations that were loosely linked to the 2014 unrest in Ferguson, Missouri. The files — all 2576 of them from 2008 to 2016 — were released Saturday and provide an eye-opening look into Soros’ political operations. Soros and His US and Australian Minions. George Soros was born in Hungary. 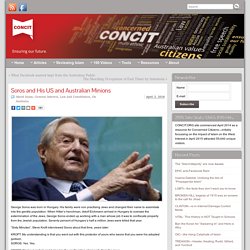 His family were non practising Jews and changed their name to assimilate into the gentile population. When Hitler’s henchman, Adolf Eichmann arrived in Hungary to oversee the extermination of the Jews, George Soros ended up working with a man whose job it was to confiscate property from the Jewish population. Seventy percent of Hungary’s half a million Jews were killed that year. “Sixty Minutes”, Steve Kroft interviewed Soros about that time, years later: KROFT: My understanding is that you went out with this protector of yours who swore that you were his adopted godson. KROFT: Went out, in fact, and helped in the confiscation of property from the Jews.

KROFT: I mean, that’s — that sounds like an experience that would send lots of people to the psychiatric couch for many, many years. Australian democracy swiss-cheesed by George Soros Open Societies Foundations. Have revealed that billionaire, George Soros, has used billions of dollars to try to bring about open borders by funding NGOs all over the world to harass people who do not want mass immigration. 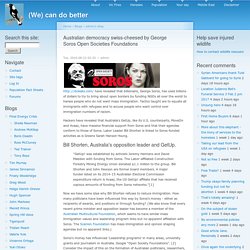 Tactics taught are to equate all immigrants with refugees and to accuse people who want control over immigration numbers of racism. Hackers have revealed that Australia's GetUp, like its U.S. counterparts, MoveOn and Avaaz, have massive financial support from Soros and that their agendas conform to those of Soros. Labor Leader Bill Shorten is linked to Soros-funded activities as is Greens Sarah Hanson-Young. 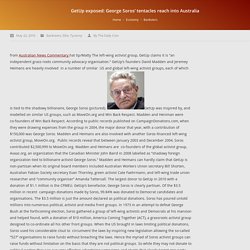 GetUp’s founders David Madden and Jeremey Heimans are heavily involved in a number of similar US and global left-wing activist groups, each of which is tied to the shadowy billionaire, George Soros (pictured). GetUp was inspired by, and modelled on similar US groups, such as MoveOn.org and Win Back Respect. Madden and Heniman were co-founders of Win Back Respect. According to public records published on CampaignDonations.com, when they were drawing expenses from the group in 2004, the major donor that year, with a contribution of $150,000 was George Soros.