4 Reasons Why Drones Will Be Huge In 2017 For A Film Production House. In technological terms, a drone is basically an unmanned aircraft that can fly in air on its own.In the current scenario; they are widely used in photography throughout the world. 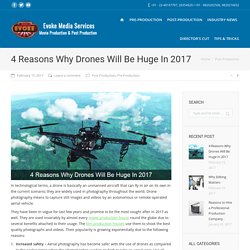 Drone photography means to capture still images and videos by an autonomous or remote operated aerial vehicle. They have been in vogue for last few years and promise to be the most sought after in 2017 as well. Why Editing Matters. The history of entertainment dates long back to the courts of the kings where music and dance were the main sources of entertainment. 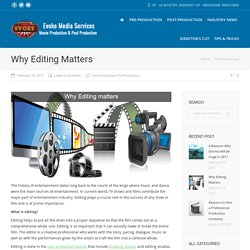 In current world, TV shows and films contribute the major part of entertainment industry. Editing plays a crucial role in the success of any show or film and is of prime importance. What is editing? Editing helps to put all the shots into a proper sequence so that the film comes out as a comprehensive whole unit. Editing is so important that it can actually make or break the entire film. Editing is done in the post production studios that include dubbing studios and editing studios.

Importance of editing It gives the perfect flow to the film – A film may be amazing in all its aspects like actors, performances, scenes, songs etc. but due to various reasons, its flow often gets broken. Reasons to Hire a Professional Production Company. The entertainment industry is witnessing a tremendous boom today and touching totally unexplored heights of success. 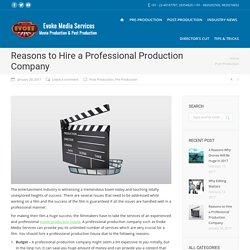 Budget – A professional production company might seem a bit expensive to you initially, but in the long run, it can save you huge amount of money and can provide you a content that you can use for many other marketing campaigns. These are the important reasons to hire a professional production company to boost your business. Movie Production House. Evoke Media - Film Production House. Our studios are equipped with Acoustically treated editing rooms Ergonomically designed seats to support your longer working hours Individual luxurious editing suites. 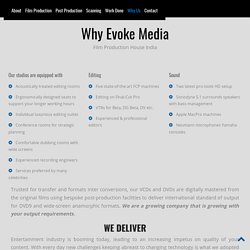 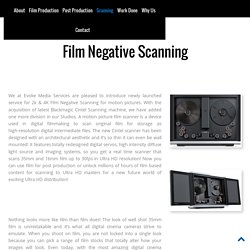 With the acquisition of latest Blackmagic Cintel Scanning machine, we have added one more division in our Studios. A motion picture film scanner is a device used in digital filmmaking to scan original film for storage as high-resolution digital intermediate files. The new Cintel scanner has been designed with an architectural aesthetic and it’s so thin it can even be wall mounted! It features totally redesigned digital servos, high intensity diffuse light source and imaging systems, so you get a real time scanner that scans 35mm and 16mm film up to 30fps in Ultra HD resolution! Now you can use film for post production or unlock millions of hours of film based content for scanning to Ultra HD masters for a new future world of exciting Ultra HD distribution! Nothing looks more like film than film does!

Why Scan Negatives. Film Production House. Post Production Studios in India. Editing Studio On its most fundamental level, film editing is the art, technique, and practice of assembling shots into a coherent sequence. 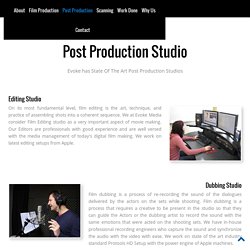 We at Evoke Media consider Film Editing studio as a very important aspect of movie making. Our Editors are professionals with good experience and are well versed with the media management of today's digital film making. We work on latest editing setups from Apple. Dubbing Studio Film dubbing is a process of re-recording the sound of the dialogues delivered by the actors on the sets while shooting. Sound Design Sound design is the art of adding the exact sound of the objects depicted in the visual. Background Score Sometimes to bring out the emotions or the grandeur of the scene dialogues are not enough, background music or background score is recorded to appease the audience.

Surround Mix As the name suggest, mixing is the process of combining all kinds of sounds used for the visual onto one track. Color Correction. Movie production house.