File:World Map.correctlycolored.svg. CancelEditDeletePreviewrevert Text of the note (may include Wiki markup) Could not save your note (edit conflict or other problem). 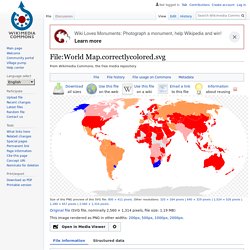 Please copy the text in the edit box below and insert it manually by editing this page. Upon submitting the note will be published multi-licensed under the terms of the CC-BY-SA-3.0 license and of the GFDL, versions 1.2, 1.3, or any later version. See our terms of use for more details. Add a noteDraw a rectangle onto the image above (press the left mouse button, then drag and release).This file has annotations.

Save To modify annotations, your browser needs to have the XMLHttpRequest object. Wellsville climbing crazy horse on stock crf450r. Here's Why Police Used To Drive The Ford Crown Victoria. The California Highway Patrol recently retired its last Ford Crown Victoria Police Interceptors from active service, a trend most police forces across North America have been following for some time now, as Ford stopped production of the fleet service "P71" Crown Victoria nearly a decade ago in 2011, bringing an end to the long and accomplished career of the automotive world's most faithful public servant. 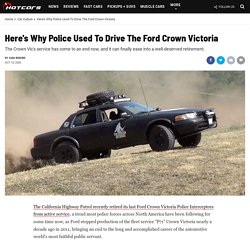 Crown Vics have seen use not only as police vehicles but also as government car service vehicles, private cars and even taking over from the Checker Marathon as the iconic New York yellow taxi cab. Of course, the island of Manhattan is not the only urban center to use Vics as taxis, but the yellow NYC taxi colors are its second most famous livery after black, white, and "To Serve and Protect.

" The Crown Vic's service has come to an end now, and it can finally ease into a well-deserved retirement. But what made the Crown Victoria such an effective police car? If You Need More Space In The “Back,” These 20 Cars Were Made For You. So let’s say you need more backseat space, and you want a passenger car - not an SUV, a crossover van, or even one of the new station wagons that are staging a comeback. 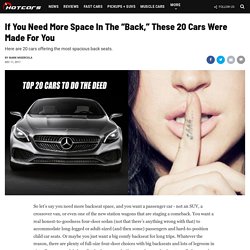 You want a real honest-to-goodness four-door sedan (not that there’s anything wrong with that) to accommodate long-legged or adult-sized (and then some) passengers and hard-to-position child car seats. Or maybe you just want a big comfy backseat for long trips. Whatever the reason, there are plenty of full-size four-door choices with big backseats and lots of legroom in virtually every model class.

But be forewarned - if you prefer your backseats really large and upscale, you’re probably going to pay more for extra room with a view. That’s because many (not all) of the vehicles with the biggest passenger-seat compartments are luxury class sedans with brand names that match -- BMW, Infiniti, Audi, Lexus, and Cadillac. So, let’s take it from the top, and look at sedans that offer the most backseat room. Definition of Noble by Merriam-Webster. 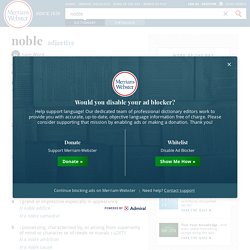 Lina: Name Meaning, Popularity, and Similar Names. Adelaide or Adeline? - Nameberry - Baby Name Blog. By Brooke Cussans, Baby Name Pondering Both Adelaide and Adeline are beautiful, classic sounding names that have been gaining popularity for the past decade. 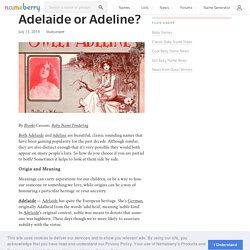 Although similar, they are also distinct enough that it’s very possible they would both appear on many people’s lists. So how do you choose if you are partial to both? Sometimes it helps to look at them side by side. Origin and Meaning Meanings can carry aspirations for our children, or be a way to honour someone or something we love, while origins can be a way of honouring a particular heritage or your ancestry.

Adelaide — Adelaide has quite the European heritage. Adeline – Speaking of noble names, Anna at Waltzing More Than Matilda tells us that “Adel” names were abundant among the Frankish nobility as it emphasized that their daughters were high-born and hence made them better marriage prospects. Waltzing More Than Matilda. Tomorrow the city of Adelaide will welcome their Olympic athletes home with a street parade. 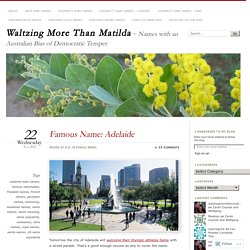 That’s a good enough excuse as any to cover the name Adelaide, which has been sitting in my Request file for many months now. Adelaide is the capital of South Australia, and it’s a pleasant coastal city which has been voted the Most Liveable and judged Most Affordable capital city in Australia. It was planned in the 19th century as the capital of a British province of free settlers, and is the only state capital not to have a history of convict settlement – something of which it is still very proud. Its early history was marked by a commitment to religious freedom and political civil liberties, which led to its nickname of The City of Churches. Despite this moniker, the last census revealed that almost a third of Adelaideans had no religious affiliation at all, making it one of our least religious cities. 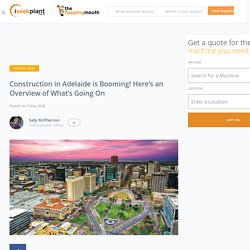 This project was featured as one of the largest in Australia! Click here to get our full wrap up of Australian Infrastructure Projects 2017 was a massive year for Adelaide and Deloitte Access Economics’ quarterly investment monitor found that the construction project pipeline in South Australia totalled $47.2 billion. Of this figure, $9.96 billion was under construction in 2017 with just $1.5 billion worth of construction finishing in 2017.